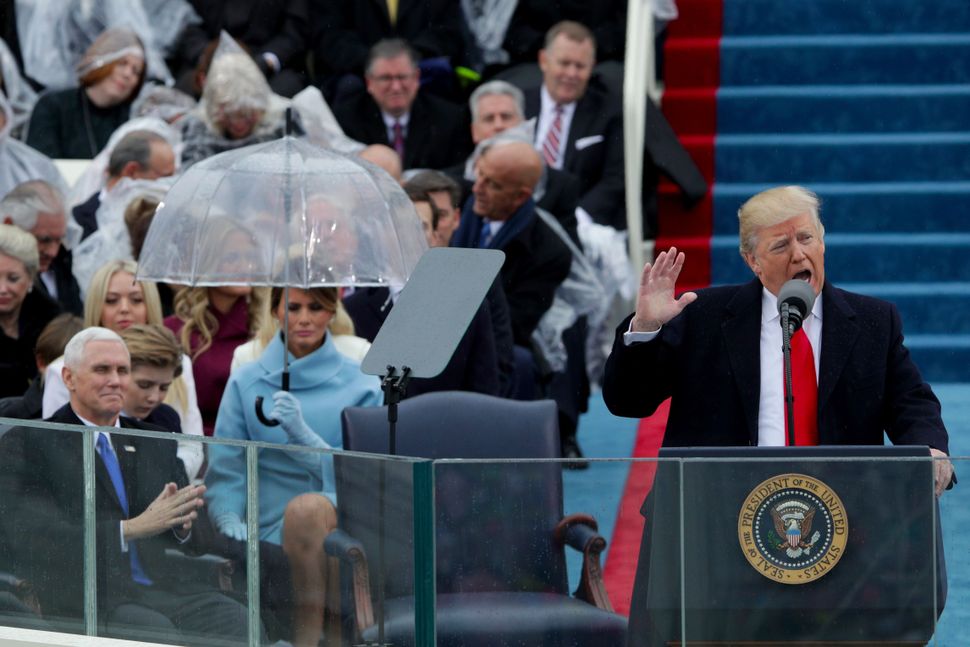 In a 16-minute address, a condensed and somewhat refined version of his campaign speeches delivered over the 18-month campaign, President Donald Trump sought to turn the page on what he described as an age of self-centered political elites doling out the goods of the nation to members of ruling class.

But on the way he also turned his back on what was once the backbone of Jewish Republican support – the school of neoconservatism, hawkishness and the cherished notion that the United States plays a special, global leadership role.

“We’ve defended other nations’ borders while refusing to defend our own,” said Trump, delivering his inaugural speech to a half-filled National Mall. “And spent trillions and trillions of dollars overseas while America’s infrastructure has fallen into disrepair and decay.”

The idea of investing American military and financial capital overseas in order to promote likeminded values is a bedrock of neoconservative worldview which dominated to a great extent the presidency of the last Republican president, George W. Bush. The school of thought, which is now sometimes used as an anti-Jewish pejorative, was home for many pre-Trump Jewish Republicans. It coupled hawkishness and an openness to international intervention with an avoidance of social conservative issues. Those days are over, Trump said.

“I’ll be unembarrassedly old-fashioned here: It is profoundly depressing and vulgar to hear an American president proclaim ‘America First.’” tweeted Bill Kristol, the Weekly Standard’s editor at large. In a later tweet Kristol added: “Hope for the best, prepare for the worst.”

In Commentary John Podhoretz called Trump’s vision presented in his inaugural address “utopianism” and argued that his promises cannot be fulfilled. “Dreams. He will bring back dreams,” said Podhoretz.

But while the older generation Jewish Republican establishment may have been turned off by parts of Trump’s inaugural speech, the new president’s Jewish supporters reveled in the moment, tweeting photos from the inauguration, and praising Trump’s focus on fighting radical Islamic terrorism in his speech.

The Zionist Organization of America, a non-partisan group whose leader has praised Trump, welcomed Trump’s inaugural speech, noting his pledge to eradicate terrorism.

Heading a family of 4 that travelled from New York to attend the inauguration, Aaron, an Orthodox Jew who would not provide his full name, said it was the issue of Israel that made him support Trump in the first place, and Friday’s inaugural speech helped reinforce this belief. “He understands that terror is the threat, and he understands what Israel is dealing with,” he said.

Trump did not speak about Israel in his speech, nor did he mention any other country. The isolationist tone Trump struck in his speech runs counter to the prevailing view in the pro-Israel community that robust foreign involvement ensures the future of American support for Israel.

The strict separation between Trump supporters and detractors, enforced by a massive police presence aimed at keeping protestors away from the inauguration site, helped each side remain within its own bubble. On the footsteps of Capitol Hill and along the route of the presidential parade, those who braved the rain to cheer for Trump as he took office, were completely isolated from protests outside the enclosed perimeter.

But steps away, beyond the security barriers, a different Washington revealed itself, packed with protestors, a few engaged in vandalism, most protesting peacefully. The few encounters between the two sides were, at times, bitter. “Nazis,” cried a young demonstrator next to McPherson Square to a couple of middle-aged men in red Make America Great Again baseball caps who leaving the inauguration area. The two men kept on walking, entering an adjacent hotel.