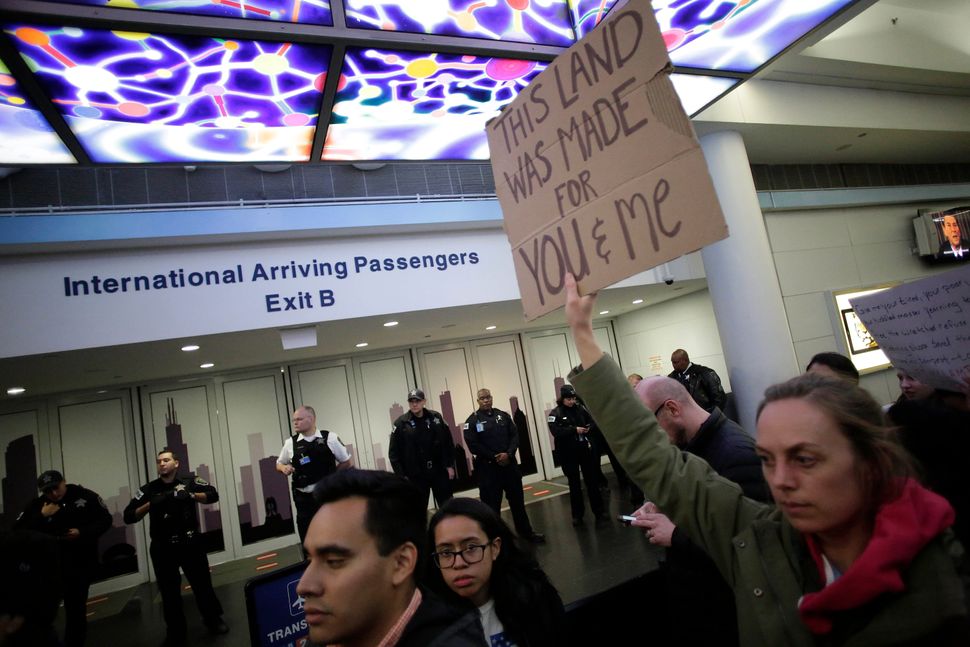 It was the wife and young daughters of a Syrian refugee in Connecticut who were Mark Hetfield’s main focus Saturday. Hetfield, a 2016 Forward 50 honoree for his work as president and chief executive of HIAS — formerly called the Hebrew Immigrant Aid Society — runs the only Jewish organization recognized by the U.S. government and UN agencies to resettle people from all over the world seeking refuge in America.

The father has not seen his wife and daughters, who have for two years lived in Amman, Jordan, for several years. They passed the intensive verification, screening and interview process required of anyone seeking U.S. asylum and were approved by the Department of Homeland Security on January 20, the day of Trump’s inauguration.

On January 27 they left Amman for Kiev, a major transit point for immigrants en route to the United States. The mother and her daughters, ages 8 and 5, were stopped by airline officials as they boarded a plane to New York, told they could not continue.

“They were shipped back to Amman because of this stupid order,” Hetfield said. “They were approved and everything. He has been separated from them for years, and now they are all heartbroken.”

It isn’t just this one family, or even other refugees with approval to immigrate and visas stranded at U.S. airports, who can’t finish their journeys because of Trump’s executive order. A federal judge in Brooklyn Saturday night issued a temporary stay on the ban, which will reportedly get further judicial review Sunday. Thousands of Americans, among them many Jews, protested at airports and other sites around the country Saturday night in a spontaneous demonstration of anger.

But it is not at all clear that there is any way to overturn the executive order, Hetfield told Haaretz. The 1980 Refugee Act, which organized what had been until then ad-hoc efforts to assist and resettle immigrants from the Soviet Union, Vietnam and elsewhere, gives the president broad control over immigration, he said.

“Our network has all of these homes they prepared for refugees who now will not be arriving,” Hetfield said. “We have to deal with relatives who are filled with anxiety. This is an international train wreck, and a totally avoidable one.”

HIAS executives have been “desperately trying to communicate with the White House but it’s been unidirectional. We’ve sent emails, left messages but nobody’s responding,” he said.

Through both Democratic and Republican administrations, HIAS has had strong relationships with government officials, all of whom have long considered refugee resettlement a bipartisan issue. Under Trump, that has changed dramatically, Hetfield said, adding: “We have never seen anything like this before.”

“It’s going to have a devastating effect on thousands of people,” he said. “Victims of torture and trauma who are refugees have waited for years in a hellhole and now the rug has been pulled out from under them.”

HIAS has 500 staff members in a dozen countries: the United States and Israel, where the agency aids asylum seekers from Sudan and Eritrea; Greece, Austria, Ukraine – countries through which immigrants flow; Chad, Kenya and Uganda, where HIAS provides psychosocial services and helps African refugees become self-sufficient; and Ecuador, Panama, Costa Rica and Venezuela for addressing issues in Central and South America.

The group assisted 4,188 people last year from 36 different countries; about half were Muslims. The others were Jews and Christians and some Hindus and Buddhists, Hetfield said. The Jews – just 169 out of the total – were mainly from Ukraine and Iran.

Though HIAS was established to help Jewish immigrants resettle in the United States, Hetfield notes how since the 1990s “as there were fewer Jews in captivity we gradually transitioned from helping Jewish refugees to helping refugees because we are Jewish.”

Nine nonprofit organizations in the United States do refugee immigration and resettlement work in partnership with the government. Six are religious – all of them Christian but HIAS. The other groups are secular.

In 2014 HIAS’ revenues reached $32.8 million, according to the most recent tax records available. Of that, $19.5 million came through the U.S. State Department, half of that sum for resettling refugees in the United States. The other half was for overseas refugee programs, Hetfield said.

Trump’s executive order will affect refugees far beyond those who hope to get to America.

“This will have a ripple affect on the behavior of other countries and that’s where I’m even more worried. The U.S. has always been a leader in refugee resettlement. While we don’t take a large number relative to our population, we do take a large number overall because of our size,” Hetfield said.

Some 70,000 refugees and asylum seekers were granted safety in the United States two years ago. President Barack Obama increased the number to 85,000 last year, and before leaving office he expanded that to 110,000 people for 2017. With Trump’s executive order that has now shrunk significantly.

The strategy HIAS is adopting now is “to be as public and as aggressive as we can. The only way we can change this policy is to embarrass the president, ”Hetfield said. “He’s hard to embarrass but he should be ashamed of himself. He could rescind the executive order if he wanted to right now. But I’m not holding my breath.”

Dating back to the presidential primaries there has been “a horrible politicization of the refugee problem,” Hetfield said. “President Trump has exploited that polarization – to a really alarming extent. So we don’t know what’s going to happen. We certainly are not optimistic about the future of the refugee program.”

Trump’s executive order “was a cruel, vicious act. The pretext is security but the reason for it is Islamophobia and bigotry. We know this because the refugee program is incredibly secure. Applicants go through more screening than anyone else,” Hetfield said.

“We are appalled, especially at a time when the world is in its greatest refugee crisis since World War II, and that [the order] was issued on International Holocaust Remembrance Day. The entire Refugee Convention was written to make sure the Holocaust would never happen again, that refugees would never again be handed back to their executioners as they were in the 1930s.”

The one bright spot, Hetfield says, is support from the Jewish community – especially from synagogues and individuals at the grass roots. “It’s very heartening,” he said. “We have a lot of support behind us right now, and that’s what keeps me going.”

Debra Nussbaum Cohen is a regular contributor to Haaretz and the Forward.