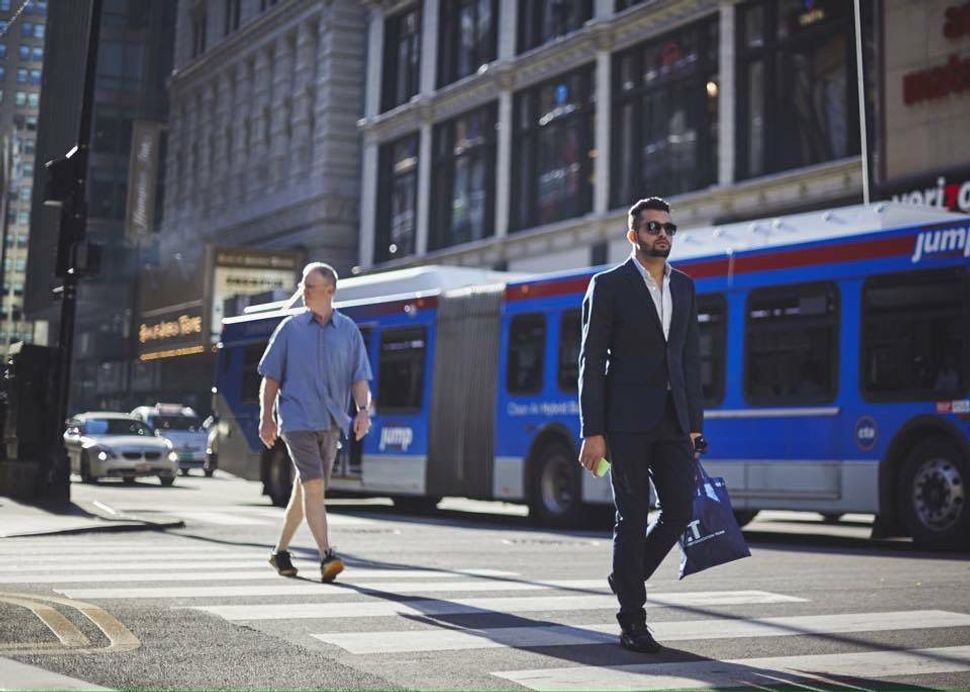 Hundreds of refugees, immigrants and even legal U.S. residents were detained this past weekend following President Trump’s controversial travel ban. Most of the people affected were Muslims, but the ban hit Jews, too.

One of them was Manny Dahari, a Yemeni Jew who saved his whole family from their native land. He has a green card and has lived in the United States for almost 11 years; the 23-year-old student is supposed to receive his American citizenship in a couple of months.

Dahari was on a family visit to Israel when Trump signed the order that included a 90-day ban on entry to all citizens of seven predominantly Muslim countries, including Yemen. 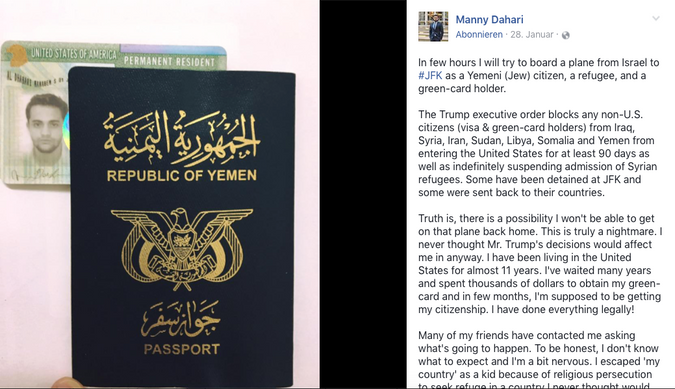 In a widely circulated Facebook post Dahari wrote before his departure for the States, he acknowledged that “there is a possibility I won’t be able to get on that plane back home. This is truly a nightmare. I never thought Mr. Trump’s decisions would affect me in any way.”

Dahari ended his post saying: “For my friends who have been celebrating Mr. Trump’s decision, you should know this does not only affect Muslims, but it also affects thousands of Jews and Christians escaping war and religious persecutions. I hope you take a moment to think about it.”

Before Dahari boarded his plane, his American attorneys advised him to stay in Israel until things became clearer, but he decided to give it a try regardless. “I wanted to take the risk because I was already late for school and didn’t want to skip another week,” Dahari told the Forward. “I had a lot of anxiety on the plane because I didn’t know what to expect.

“I always thought I was safe because of my legal status as a permanent resident in the U.S. and also because I am a Jewish refugee, but I learnt that wasn’t the case.”

He was detained and questioned for three hours and 30 minutes at John F. Kennedy International Airport, but eventually he was let into the country.

Read six facts about the 23-year-old Jewish refugee – including how he saved his whole family from Yemen.

The most interesting student at YU 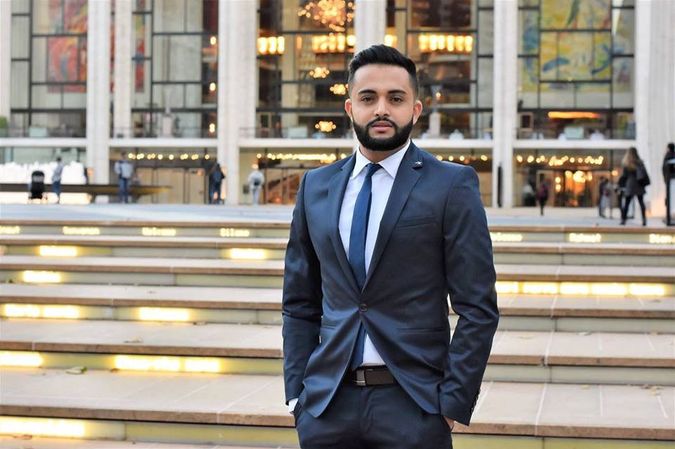 Dahari is a student at Yeshiva University in New York, where he majors in marketing with a minor in political science. Last April, the school’s paper, The Commentator, called him the “Most Interesting Student in YU” in a profile.

“At first glance, his stylish haircut, dark skin, and American accent make him appear no different than a North American university student with Sephardic ancestry,” the paper wrote. But, “Underneath his conventional exterior lies a narrative that renders him one of the most interesting and courageous students at YU.”

Left Yemen as an unaccompanied 13-year-old

Dahari was born in Raida, a village near the capital of Yemen, as the fourth of eight children. Growing up, he experienced a lot of violent anti-Semitism in the war-torn country. Arab children would throw rocks at him and his siblings, Dahari told The Commentator.

Dahari’s life existed mostly of yeshiva and life within the close-knit Jewish community in Yemen until his bar mitzvah, when he received the unique opportunity to attend a yeshiva in the United States.

The then 13-year-old was the first in his family in many generations to leave Yemen, and he did so all by himself.

Dahari initially attended a Satmar yeshiva in the Williamsburg section of Brooklyn, but he struggled with the uncommon language and the fact that he was the only student with dark skin.

Over the following years, he attended a number of different yeshivas before he moved to Chicago and finished a secular high school education so that he could go to university. “The impetus for his decision was his desire to understand the world in which he lived and to not become a stereotypical Yemenite teenager with little worldly knowledge,” The Commentator wrote.

Shocked about state of America

Dahari has lived almost 11 years in America and is set to receive his citizenship in the following months. That’s why Trump’s executive order came as an even bigger shock to him.

“I escaped ‘my country’ as a kid because of religious persecution to seek refuge in a country I never thought would turn its back on the people who need its help,” Dahari wrote in his Facebook post. “A country that has opened its doors to immigrants and refugees from across the globe.” 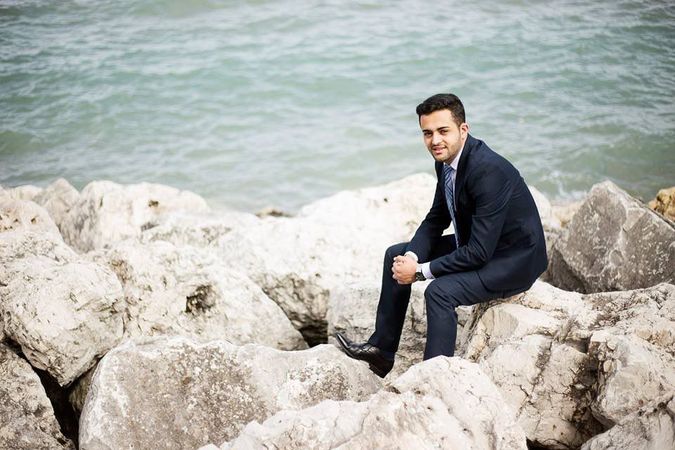 He saved his family

For 10 years, Dahari wasn’t able to return to Yemen to visit his family. In 2009, two Jews were killed in Yemen, and the Daharis started sending more of their children out of the war-torn country.

But the escape of the parents themselves was more complicated, and involved a lot of effort by their son, Manny Dahari. He got the U.S. State Department and the Jewish Agency, an Israeli organization that specializes in helping Middle Eastern Jews immigrate to Israel, to help his family.

Last March, after a two-year ordeal during which Dahari stopped going to university to focus solely on saving his family, they were brought to Israel.

The rescue was done through a covert operation, and while many details of the mission have to be kept secret, we know that it involved Jordan and Saudi Arabia and bribing Yemeni rebels. 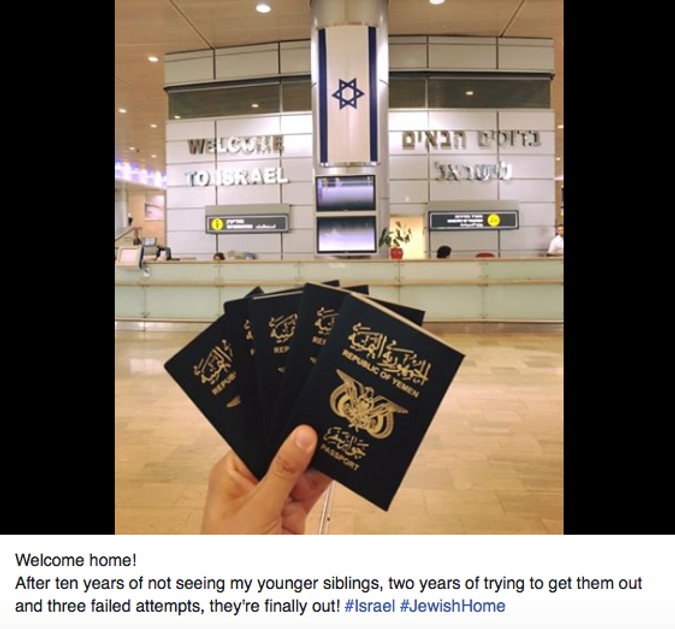 Today, Dahari’s family lives in Israel – together with a 600-year-old family Torah scroll that they managed to save. It was after a visit with them that Dahari was flying back to America, only to be detained at the airport.

Perhaps not surprising for someone who has lived such a scattered life, Dahari sees unity as the most meaningful aspect of Judaism.

“I think there is something incredible about Jews, which is unity,” he told The Jerusalem Post. “I see it everywhere – people will always help you simply because you are a Jew.”

Dahari recently spent a week in Israel as part of a YU student trip to help rebuild buildings that were in a settlement but were destroyed in a wildfire. “I’m here because I want to give back,” he told the Post. “Even though it might not be so much [help] physically, it’s an emotional support.” 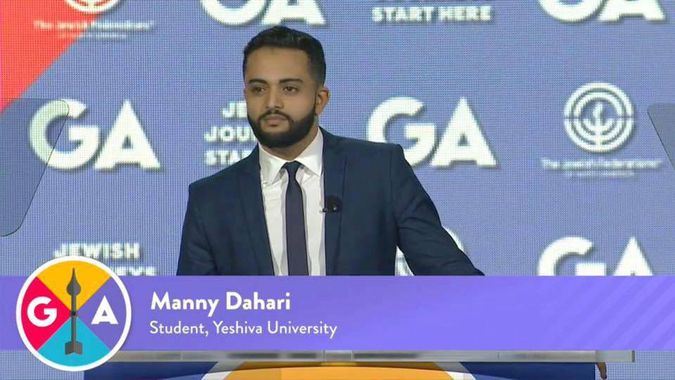 Dahari earned a degree in liberal arts from Oakton Community College in a Chicago suburb before he started his studies at YU.

In Chicago he was heavily involved with Hillel, and now, at YU, Dahari heads IAC Mishelanu, a pro-Israel campus program that “fosters leaders and provides a home for Israeli-American students,” according to the program’s website.

He is also a campus speaker for the Zionist Organization of America, and he has set up a club called Ksahrim to create connections between students and terrorism victims in Israel. He did this because he feels it’s too easy to become numb to the many headlines about attacks in Israel. I wanted “to make it more personal,” he told The Jerusalem Post.