A woman in Michigan came home last week to find a swastika painted on her door. Instead of despairing, she decided to fight back – with love and magic lifted from the pages of a beloved Harry Potter book.

“There was fear and rage and disbelief, while I wondered who could have done it and do they know me and was it religious or political or just nasty?,” she wrote, adding “And I cried, and cried.”

After Zettle calmed down, she decided that she wouldn’t judge her community “based on the worst of actions.”

But she did want people to know about it – so she decided to leave the symbol up and not remove it.

“What I really want is for people to see that this happened in our community,” Zettle wrote. “It happened to someone they know. And so maybe the next time they hear something in line at the grocery store they will say ‘No, thank you…not here, not today, not ever.’”

Her first thought was to correct the graffiti with some red spray paint, because it’s painted backwards. “You should double check your hate speech before you paint it,” Zettle joked in her Facebook post.

Instead, she put a quote from Harry Potter on top of the swastika, leaving parts of it still visible.

“There is enough really awful hate talk in the world. And maybe not enough Dumbledore,” Zettle wrote in the post.

“Happiness can be found, even in the darkest of times, if one only remembers to turn on the light,” is said by Professor Dumbledore in The Prisoners of Azkaban, the third Harry Potter book. It is one of the most famous Harry Potter quotes and often put on posters, mugs or even tattoos.

A couple of days later, Zettle took to Facebook again to express her gratitude for the community that has rallied behind her after the terrible attack.

“Having the quote on the door also helped, in a cathartic way,” she wrote. She exchanged the Dumbledore quote for one by Martin Luther King Jr., and plans to put up a new quote very couple of days. 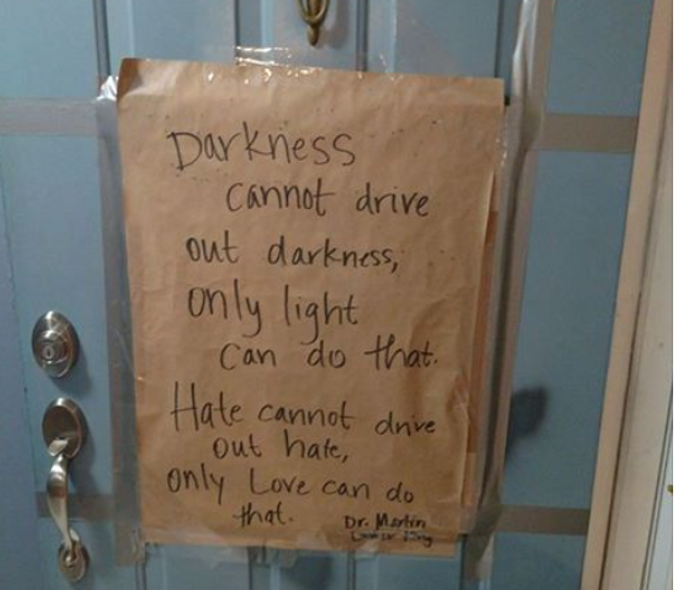