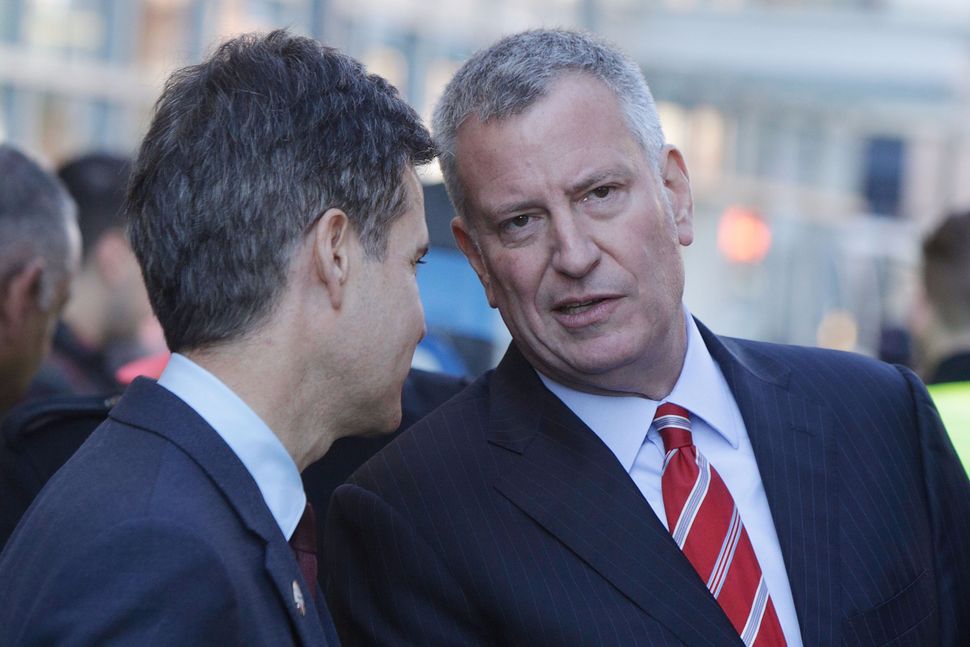 New York City Mayor Bill de Blasio met Friday with federal prosecutors investigating whether he gave special treatment to an influential Satmar Hasidic landlord in exchange for supporting his campaign, according to The New York Times.

The landlord, Moishe Indig, is a top lay leader among the Williamsburg, Brooklyn-based followers of Rabbi Aron Teitelbaum, the Satmar rebbe of Kiryas Joel, New York. Indig is the public face of the Teitlebaum’s Brooklyn-based followers, the so-called Aronis, and has cultivated deep relationships with a range of local politicians.

The Times reported that the F.B.I. and federal prosecutors were meeting with de Blasio as part of an investigation into de Blasio’s campaign fundraising. Indig hosted a fundraiser for de Blasio in October 2013, and his Satmar group endorsed the mayor.

“We’re telling the kids to tell the parents that this is the candidate we endorse,” Indig told the Forward in September 2013. “Tell your mother, tell you father, to go out and vote for Bill de Blasio.”

A political consultant close to the Aroni leadership, who spoke anonymously because he was not authorized to speak on the matter, said he had attended the October 2013 fundraiser. “It was no different than any fundraising dinner I have been at for U.S. Senator or Governor or member of Congress or City Councilman,” the consultant said.

The consultant said that Indig’s efforts for the mayor were the same as any other interest group’s efforts. “Issues of importance to the community are shared with the administration,” the consultant said. “No differently than if it was [SEIU] 1199 or the Hotel Trades council or the Upper West Side. That they’re Hasidic makes it no different.”

The Times reported that the investigation’s focus on Indig came about in recent weeks. FBI agents questioned Indig in December and took his cellphone, according to press reports.

Also in December, agents arrested a close Indig ally, Isaac Sofer. Prosecutors charged Sofer with food stamp fraud and released him on bail. At the time, observers suggested that the charges could be connected to Sofer’s political work.

According to court filings, Sofer’s attorneys and federal prosecutors were engaged in plea negotiations as of the end of January.

De Blasio arrived for his interview with prosecutors at 9:18 Friday morning, according to the Daily News. He is scheduled to fly to Atlanta later in the day for a Democratic National Convention meeting, where the party is slated to choose a new chairman.