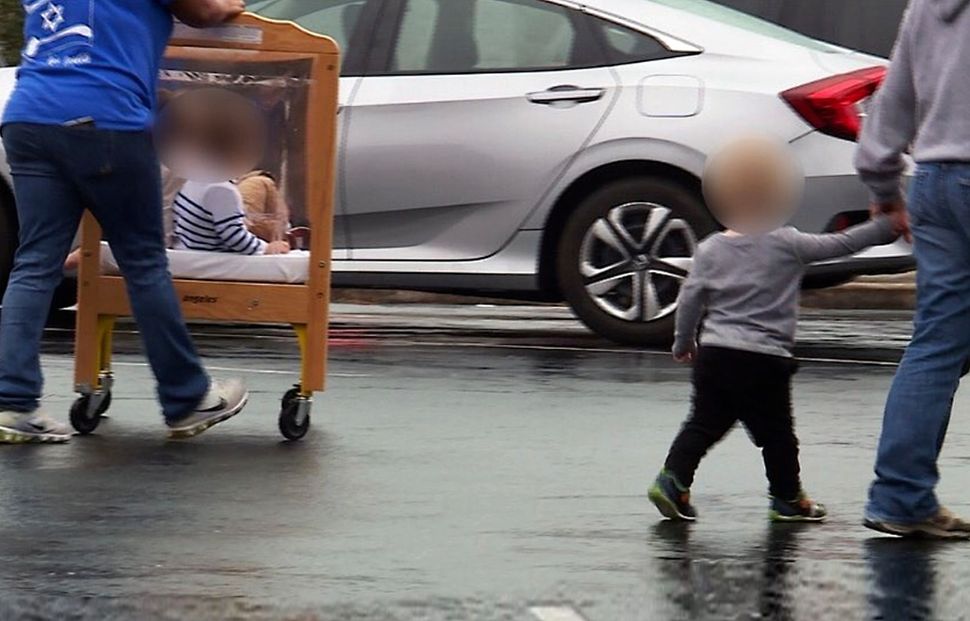 At 11:10 a.m. on Monday, Sarah Doron-Goldstein’s phone buzzed with a text message: Her 5-year-old daughter’s preschool had been evacuated.

The preschool, at the Katz Jewish Community Center in Cherry Hill, New Jersey, was one of more than a dozen Jewish schools and community centers to receive bomb threats Monday, in the latest wave to hit Jewish institutions this year.

So far no bombs have been found at any of the nearly 80 sites that have received threats since early January. But each call brings fears that, this time, someone could get killed.

“You know things have been happening,” Doron-Goldstein said. “Is this the time it’s actually real?”

Soon after receiving the alert, parents gathered at a synagogue near the JCC to wait to meet their children. Some were in tears.

“I felt the fear really creeping up,” Doron-Goldstein said. “It was very real emotion.”

Once the school was cleared, the children were returned to their classrooms. By 12:45 p.m., Doron-Goldstein had reunited with her daughter, who had absolutely no idea that anything had gone wrong. The school is equipped with a silent alarm; the children had been told they were leaving to go on a field trip.

“Everyone acted normal,” Doron-Goldstein said. “It’s tough. She’s 5 years old. It’s not like she can comprehend… At this point, there’s nothing to be said to her right now. But we’re definitely awake.”

Now, parents face the tough emotional decision of what to do tomorrow.

“There still are days when I question the advisability of sending them,” said one parent who sends two children to day care at the Siegel JCC in Wilmington, Delaware, and for privacy reasons requested anonymity.. The Siegel JCC has been evacuated three times this year, most recently on Monday.

“It’s a real question,” the parent said. For now, his two children remain in school at the JCC. “I don’t judge anyone else who decides otherwise… I’ve heard of very few cases where people are deciding to pull their kids. It’s a very difficult thing to face as a parent.”

Howard Megdal’s daughter takes violin lessons at a JCC in northern New Jersey which was evacuated today. Megdal said he would continue to take his daughter to her classes there.

“I’ll be damned if I’m going to let some anti-Semitic coward silence the learning of music,” he said.

In public Facebook posts, parents expressed fear and sadness about the experiences their children had while being evacuated Monday.

“So my kids’ Jewish day school received a bomb threat this morning,” Laurie Moskowitz wrote in a public post. She noted that things had been cleared up.

“Another bomb threat at the Charlotte JCC – the third this year,” Jeff Jackson wrote. “Our boy Owen loves going to school there, loves his teacher and his friends. If anyone has a problem with that, they can go talk to the FBI.”

Update, 3:30 P.M., February 28: This story was updated to remove an identifying detail due to security concerns.