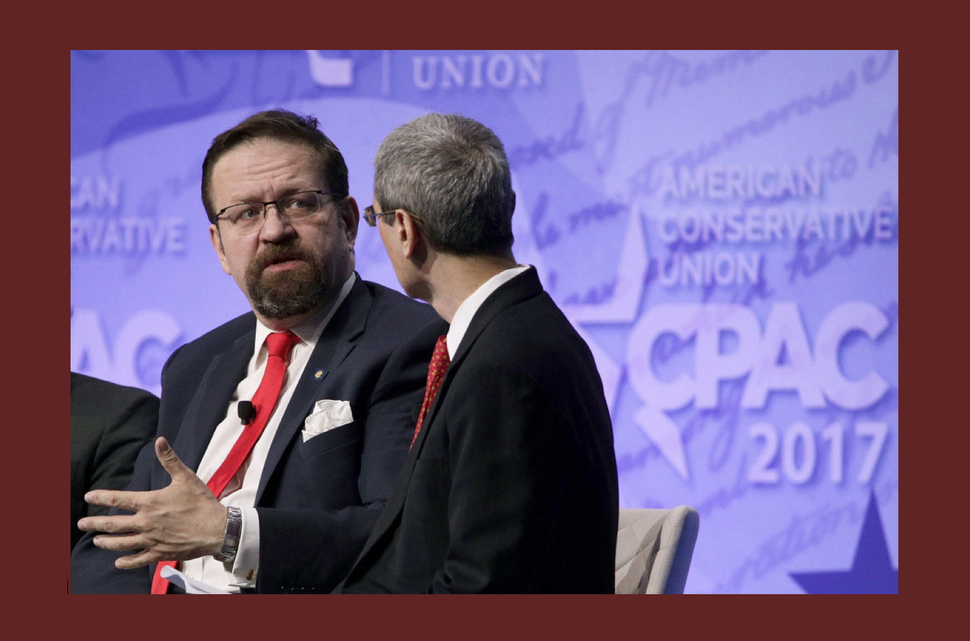 The Forward, in an exclusive published on-line just three days earlier, had identified the group as one that the State Department listed as having been “under the direction of the Nazi Government of Germany” during World War II; it also quoted leaders of one of the Vitézi Rend’s modern-day factions naming Gorka as one of their sworn lifelong members. (Gorka was quoted denying it by the website Tablet but did not repeat that denial in a subsequent formal statement he issued addressing the Forward’s story via the White House Press Office.)

The new paragraph in Wikipedia said that according to Columbia University Professor István Deák, there were Jewish members of the Vitézi Rend. But when the Forward contacted Deák, a prominent scholar of Hungary in the 20th century, he stated emphatically that he never said this. In fact, he said, Hungarian Jews were effectively barred from membership in the organization.

“I have never heard of a Jew or, more importantly, of a Christian of purely Jewish origin, who had the right to sign his name with “v” for vitéz, he wrote in an email, referring to the honorific the group confers only on members.

“Today,” he added, “the Vitézi Rend is obviously a rightist organization, whose members, especially in the US, adore the exoticism of their archaic sounding ranks.” But he added, “All in all, in my opinion, the Vitézi Rend was not, and still is most likely not a full-fledged fascist organization…It surely contains a few neo-Nazis. I doubt that any Jewish convert had made its way into the Order.”

Wikipedia entries can be edited by anyone. As the editing history and discussion boards of the Vitézi Rend and Sebastian Gorka pages show, they can also quickly become targets of an information war, with multiple individuals constantly trying to amend the page to their liking—including with false information.

Wikipedia designates this phenomenon as “edit warring.” According to the website, “edit warring is a behavior, typically exemplified by the use of repeated edits to ‘win’ a content dispute.”

Over the past weeks, since an initial article on the news website Lobelog first sparked interest in Gorka’s relationship to the Vitézi Rend, the Wikipedia entries for both “Sebastian Gorka” and “Vitézi Rend” have been edited countless times. Users have pages-long discussions and arguments over the reliability of sources and accuracy of Wikipedia wording, with editors often accusing one another of personal motives for changing the entries.

“I understand the ‘edit war’ going on is not productive but how does one stop someone from unfairly trying to defame a Subject on Wikipedia, especially in light of the contentious elections?” asked

One editor posted, in an exasperated tone, on March 19 regarding the Vitézi Rend’s Wikipedia page: “Last sane edit: I’d like to suggest reversion back to the last edit before the 2016 U.S. election. […]The reason for this is the controversy surrounding a suspected member of the group.”

But sites like Wikipedia are not alone in struggling to present accurate information to readers online.

Just a few days before the anonymous Wikipedia editor added historically inaccurate statements to the Vitézi Rend’s Wikipedia page, the Jerusalem Post published an opinion piece by Bruce Abramson and Jeff Ballabon accusing the Forward of failing in its story on Gorka to note that the order had Jewish members. Among these, claimed the authors, was “a friend of the Gorka family whose valuables the Gorkas hid from the Nazis.”

All leading historians of this era agree that Jewish Hungarians were in effect barred from membership in the organization, which was founded on the principle of Hungarian racial superiority.

“I do not know about a single Jewish member of the ‘Vitézi Rend,’ founded and presided by Regent Horthy,” Professor László Karsai, a historian at the University of Szeged in Hungary, wrote the Forward. Karsai reference was to Admiral Miklos Horthy, Hungary’s ruler from 1920 to 1944 and founder of the modern Vitéz order.

Karsai, who is also director of the Holocaust Center of the Hungarian Jewish Museum and Archives and head of the Yad Vashem Research Group in Hungary, added that one informant, a Holocaust survivor told him “some 20 years ago, that one or two members, converted Jews, were allowed to ‘join’ this organization…. Out of approximately 29,000 members, this is not too much,”

Another Hungarian historian of this period, Róbert Kerepeszki of the University of Debrecen, presented his research findings in 2014 and concluded that the Vitézi Rend was “radically rightist, ultra-Nationalist as well as anti-Semitic, never admitting Jews to their ranks.”

Historian Szilárd Tátrai, of Eötvös Loránd University in Budapest, points out in his study of the organization’s that the leadership of the Vitézi Rend used “administrative” means to ensure that Jews that would not be qualified to join. Members who wished to marry, for example, were required to ask the Vitézi Rend for permission, and by the late 1930s had to provide the birth certificates — and baptism records — of the prospective wife’s grandparents. A Vitézi Rend member could therefore not marry the granddaughter of Jews, let alone a woman who was Jewish herself.

The false attribution of incorrect historical facts to Deák is not to the only significant inaccuracy in the Vitézi Rend page. The Wikipedia entry claims that members of the organization received confiscated Jewish-owned properties after the German occupation of Hungary, when in fact the Vitézi Rend received Jewish land as early as 1939, under the Horthy regime’s anti-Jewish laws. This inaccuracy — unlike the incorrect information regarding Jewish members — appears to have been part of the entry prior to the controversy surrounding Gorka.

Journalists are required by the ethics of their profession to fact-check and reach out to multiple sources to ensure that information is as accurate as possible. Opinion writers, and contributors to information-aggregating sites like Wikipedia, are often not held to that standard.

There is no historical evidence of Jews ever being allowed to become full-fledged members of the Vitézi Rend.