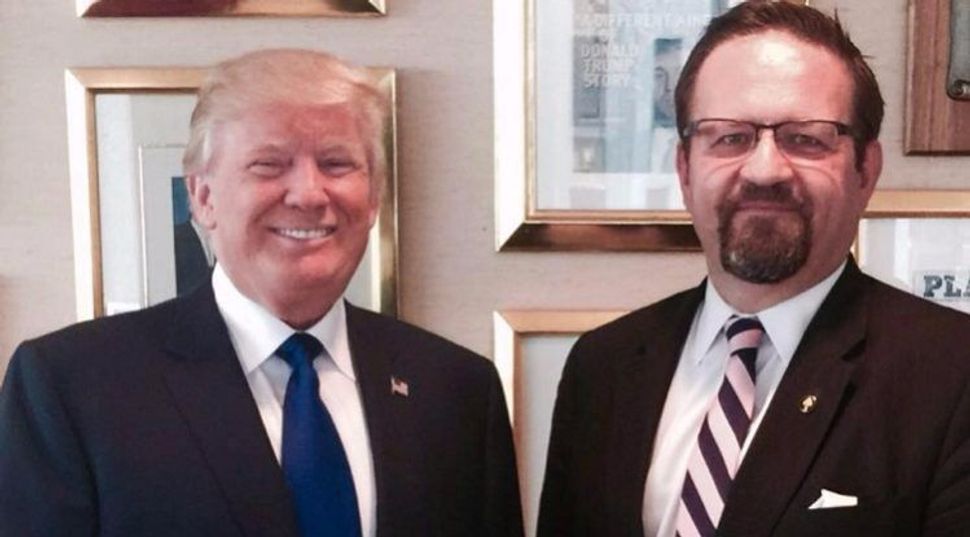 I was relieved to see you “liked” several recent tweets aimed at me, even though they were hostile and one wrongly implied that the Forward was taking money for the stories we have reported on you.

I was beginning to worry that you hadn’t seen our reporting .

As you know, on March 22, I sent you a few basic questions about your relationship to the far-right Hungarian group known as the Vitezi Rend. Several of its leaders claim that you are a member (and you have signed yourself a member in official documents), even though it’s an organization whose members are “presumed to be inadmissible” to the United States, according to the State Department.

But, despite your earlier comments about this in several other outlets, I heard nothing back from you. So couldn’t be certain if you had read the Vitezi Rend allegations.

I sent you my questions once again last Friday. But I have still heard nothing back. I therefore thought it might be useful to post these queries, on the chance that you might publicly answer or that others may have some evidence to help readers better understand more about your background.

Naturally, several of my questions stem from your comments on March 16 in Tablet, the Jewish news and culture website, where, shortly after our story broke, you were quoted saying: “I have never been a member of the Vitez Rend. I have never taken an oath of loyalty to the Vitez Rend.” Yet in your official statement issued formally through the White House Press Office just a few hours later, you did not repeat this denial; nor did you do so in your later statements in Breitbart News.

We also read with interest the March 19 interview you gave to the Telegraph in Britain, which quoted you as saying about your relationship with the Vitezi Rend: “By the bye laws [sic] I inherited the title of Vitez through the merits of my father, but I never swore allegiance formally.”

This seems somewhat different from your denial in Tablet of any affiliation with the group. In that interview, you told staff writer Liel Leibovitz that you have simply “occasionally worn my father’s [Vitezi Rend] medal.” You also said you used the Vitezi Rend’s exclusive ‘v.’ honorific initial as part of your name just “to honor [my father’s] struggle against totalitarianism.”

Still, I remain confused: All the group members with whom we have spoken state unequivocally that both of these acts are allowed only to those who have given a formal oath of lifelong fealty to the Vitezi Rend and the ideals of its Nazi collaborationist founder, Hungary’s World War II-era nationalist ruler Miklos Horthy. We wonder, therefore:

1) In what year did you become a member on the basis of your father’s membership?

2) How were you informed about your ascension to membership status?

3) Can you explain how you became a member without having to take the oath?

4) Did your father ever take an oath to become a member of the Vitezi Rend?

5) If not, then what form did this awarding of membership to your father take? Was there a ceremony of any kind?

6) Finally, one thing that has genuinely perplexed me throughout my reporting: Why did your father—and now you—consider membership in a group that, according to the State Department, allied itself with Nazi Germany—and happily took over real estate confiscated from Hungarian Jews sent to concentration camps—to be a proud reflection of “what my parents suffered under both the Nazis and communists?”

As you know from our emails to you over the past month, we have a few other questions, but the answers to these would be a great start.

I apologize for the burden I know that responding to these questions must lay upon your time and energy while advising the president on counter-terrorism. But I think your responses would help us a lot in covering this story fully and fairly. They might help you, too, in laying to rest some of the questions that now swirl around you.