For Neo-Nazis, Trump Quickly Falls From Hero To ‘Jewish Pawn’ 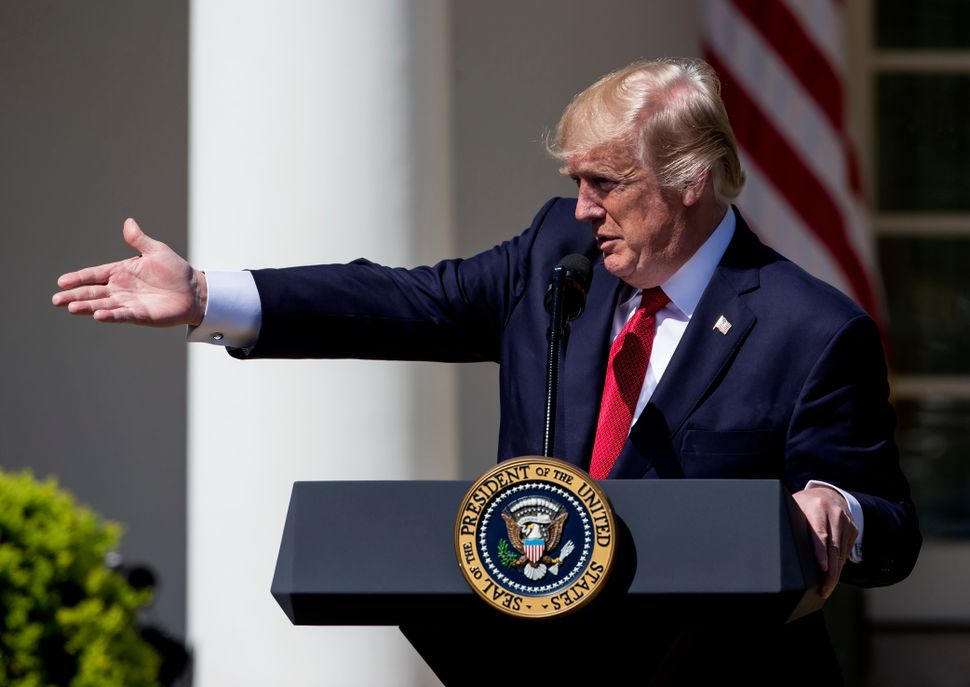 Before Donald Trump began his political career, neo-Nazis and white nationalists were suspicious of the business tycoon from New York, some accusing him of associating too closely with Jews, maybe even being a “secret Jew” himself. But during the campaign he transformed, becoming an icon for white nationalists who saw him as a vehicle for their ideology. Now, there’s been another about face. As Trump has seemingly flip-flopped on some of the campaign promises that most energized his white nationalist base, he’s falling out of favor again with his fringe supporters.

Now they see him a “Jewish pawn.”

“So the Jews were successful in their complete takeover of the Trump administration,” wrote Andrew Anglin, the publisher of the neo-Nazi website the Daily Stormer. Anglin’s website has been dubbed the country’s “top hate site” by the Southern Poverty Law Center. “The party is over and the Jews are in charge.”

Duke dedicated an hour long radio program to discuss what he called a Jewish coup with Slattery. Trump may have “attacked Syria in order to buy himself some breathing space,” Duke’s website read. “But no matter what the case, we need to call out the Jewish nature of this coup d’état, and destroy the Jewish privilege of being above any criticism once and for all.”

Duke and others directed particular anger at Jared Kushner, Trump’s Jewish son-in-law, who they saw as pulling the strings behind Trump’s airstrike and bombing in Syria and Afghanistan.

In a podcast with the “alt-right” blogger from Scotland known as Millennial Woes, AntiDem expanded on his views of Kushner.

“There was one single Jew in Trump’s personal inner circle,” he said, referring to Kushner. “Within three months of Trump taking office, this man seems to have wormed himself into a position of power, made a nest for himself in an office at the White House, gotten Trump’s senior political adviser demoted and marginalized, blunted most of Trump’s pushes toward social conservatism, and brought us to the brink of war with one of Israel’s enemies.”

Ben Richards, a writer for the Daily Stormer, was particularly troubled by a recent video of Trump wishing Jews a happy Passover. Richards denigrated the greeting as a “hostage video” demonstrating that Trump had somehow been compromised.

“At first you might think you are watching a hostage video but this is actually the President’s weekly address,” Richards wrote. “It’s clear that Trump is no longer the man he once was.”

On the social media site Voat, commenters in an “alt-right” channel lamented what they saw as the downfall of their onetime hero. Some said they smelt a rat all along.

“I always thought Trump was going to be just another Jewish pawn,” wrote a user called rgwibu. “I have zero support left for him and his presidency.”

For Neo-Nazis, Trump Quickly Falls From Hero To ‘Jewish Pawn’