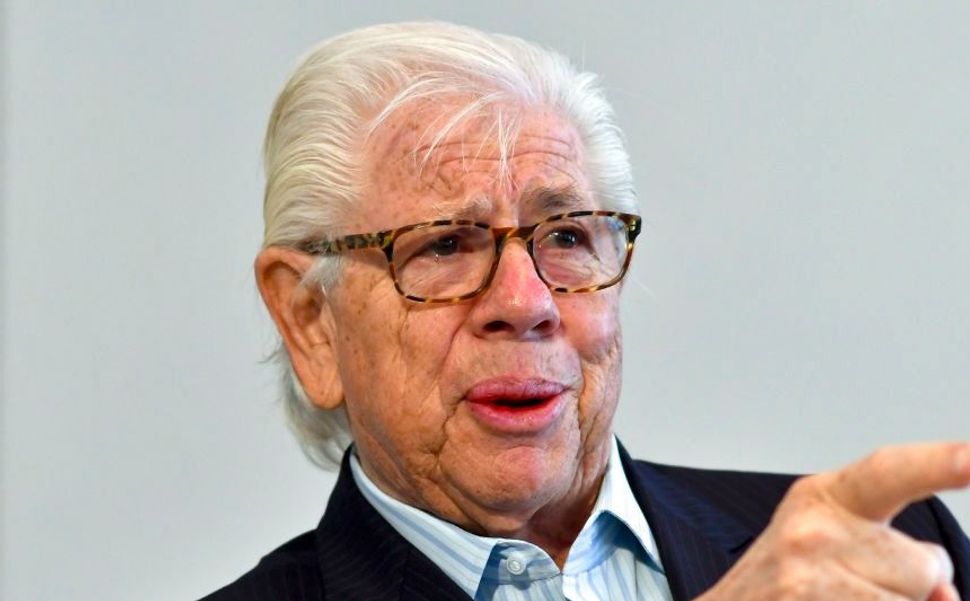 “Donald Trump suffers from ethical blindness regarding conflicts of interests of a kind we have never seen in a presidency in the United States in the current era,” the former Washington Post staffer told a rapt audience in Jerusalem on Sunday, speaking two days before the president fired FBI Director James Comey and sparked more speculation about his motives.

Citing business dealings that Trump’s son-in-law, Jared Kushner, has in China and Trump’s relationships with Russia and neighboring states, Bernstein said, “We don’t know where this story is going to go, but we are beginning to get indications that we need to know more. Trump calls this fake news. I call it the best obtainable version of the truth – and I am proud of the work the press is doing now.”

That’s a 180 from the renowned investigative journalist’s criticism of the press when Trump was elected last November, which he blames partly on the “epic failure of the press to fulfill its professional duty.”

That duty, he insisted, is to uncover the truth through dogged, responsible investigative journalism. He added that Israel – and Jerusalem in particular – are “the epicenter for learning about the best obtainable version of the truth” about today’s world.

Bernstein was talking at the 2017 Freedom of the Press Conference, where he delivered the keynote speech.

Bernstein said the media’s biggest problem during the presidential election campaign was its failure to ask, “Who is Donald Trump?” Thankfully, he added, more than 100 days into Trump’s presidency, the media is finally asking that question. And the answers are deeply disturbing.

The president, Bernstein charged, “is a liar … and is ignorant of the history of his own country, the constitution and real existing conditions in which people live.

“This is not an opinion,” he added. “It is reportorial – the result of the best version of the truth.”

Trump is essentially “lazy and unwilling to do the hard work necessary to be a great leader,” said Bernstein. And all of this was known before he was even a political candidate.

Bernstein himself interviewed producers on Trump’s NBC reality TV show “The Apprentice” and discovered they “all had disdain for Trump, and [they] all said he bullied and was dismissive of others. But the real problem was that he didn’t do his work and was … unprepared. We’re now seeing the same kind of lack of regard for knowledge, preparation and learning. And it’s a hell of a lot more dangerous in the president of the United States than in a TV program.”

Bernstein, 73, is best known for his work with fellow reporter Bob Woodward to uncover the Watergate scandal in 1972, which led to numerous government investigations and Nixon’s eventual resignation in August 1974.

The journalists’ work saw their newspaper, the Washington Post, be awarded the Pulitzer Prize for Public Service in 1973. And their 1974 nonfiction book about their experiences, “All the President’s Men,” was adapted into an Oscar-winning movie in 1976, starring Dustin Hoffman as Bernstein and Robert Redford as Woodward.

Dapper, and speaking with a soft southern drawl, Bernstein frequently deviated from his prepared notes to engage with an admiring audience, made up mostly of journalists and academics.

He complained that the public and politicians have devolved into “cacophonous … ideological warfare and easy answers for complex questions as [a] substitute for the best obtainable version of the truth. And we in journalism are complicit.”

Despite its vast resources, he said, the media did not produce a single investigative documentary throughout the party primaries and presidential campaigns. Instead, he noted, “the media made a choice to cover the circus, rather than [doing] the more plodding work of journalism.”

Bernstein said he first understood about “the best obtainable version of the truth” when, as a teenager, he began working at now-defunct daily afternoon newspaper the Washington Star. “There was no Twitter then, no internet – just common sense, inquiring minds, and a willingness to work long hours and ask hard questions.”

By the age of 28 he was working at the Washington Post, which is when he heard about the break-in at the Democratic National Committee’s headquarters, in the city’s Watergate office complex. The story sounded “like a hell of a better story than the profile of a local politician I was working on,” he said, to laughter.

Throughout their work on the story, Bernstein recalled, he and his colleagues relied on “the basic methodology of investigative reporting, which is hard work – that basic slogging you do as a reporter if you believe in the idea of the best version of the truth. It takes an enormous amount of effort, thinking, pushback, removal of ideological baggage, for sure luck and – what is unusual in our profession today – humility.”

He doubted whether the public today would be as receptive to their work as they were at the time. Now, he contended, “People are looking for information to reinforce what they already believe, rather than being open to the best obtainable version of the truth. They want information that will buttress the ideological, cultural and religious values and prejudices they already hold.”

Abruptly switching subject matter, Bernstein then talked about his time in Israel, saying his experience on this trip “profoundly affected me as a reporter and as a Jew.”

Jovially, he related that as a teen he had been regional president of the B’nai B’rith Youth Organization – but failed in his bid to become its international vice president. His first real connection to Israel came back in 1982, when he was sent here to cover the first Lebanon war. He had not been back since.

Criticizing himself, Bernstein noted that he had previously written about the cooperation between Pope John II and then-President Ronald Reagan in the 1980s to keep the Solidarity (Solidarnosc) trade union movement alive in Poland. This was “one of the great secrets that led to the collapse of communism. So I was able to see this notion of spiritual power as a source of geopolitical consequence. But until I arrived here in Israel a few days ago, it did not occur to me – and this is my own failing as a reporter – that I had missed the most important story since the fall of communism. After this short time here, I believe that any serious reporter who wants to understand our world – including what is going on in Washington or Europe, and what’s happening in Syria and ISIS, and everything that is relating to the internal and external upheavals in the Islamic world – must first come here. This is ground zero.”

Apparently sensing that the audience was confused by his near-mystical tone, and in response to follow-up questions, Bernstein tried to clarify his stance. “Until we have a better understanding of what emanates from here and within a 100-mile radius of here, I don’t think we can be truly responsible reporters and provide the best obtainable version of the truth.”

The final question brought matters back to the present incumbent of the White House. Asked whether Trump be impeached, Bernstein responded, “Thankfully, that’s not my job. The great thing about being a reporter is I don’t have a crystal ball. We’ll have to see what the best obtainable version of the truth is, and what the public and institutions do with it.”