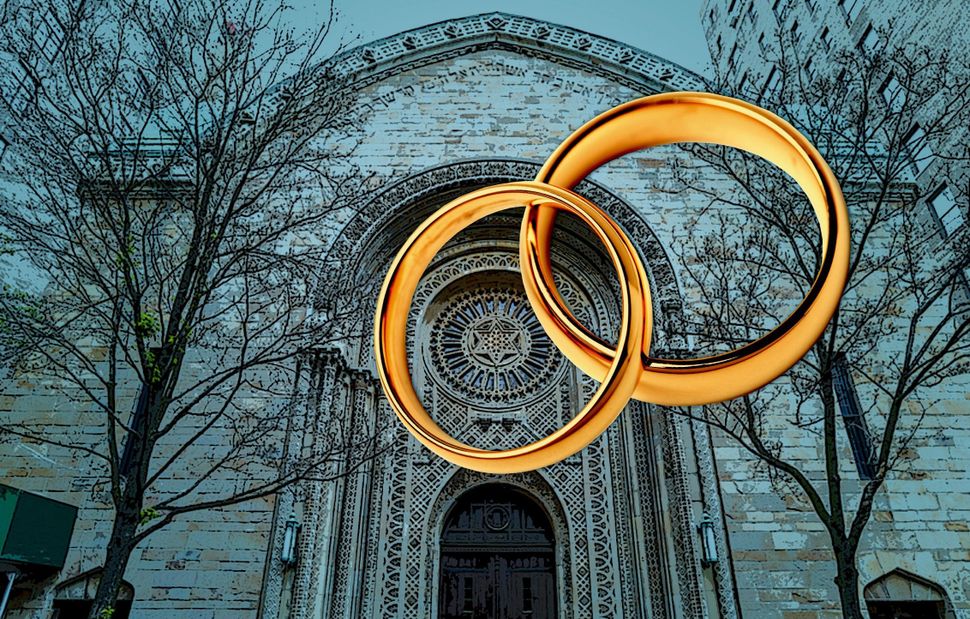 B’nai Jeshurun stands on 88th Street among expensive Upper West Side apartments, an impressive synagogue in an elegant Moorish style. It’s best known for lively and well-attended Shabbat services, which can attract thousands of congregants, including a distinctive, progressive core of Jewish movers and shakers. Attorney General Eric T. Schneiderman has attended, as well as Representative Jerrold L. Nadler and the actor Rick Moranis. Services famously include lively music. Congregants sing, clap and dance. Some might break down in tears.

Bnai Jeshurun’s Shabbat services can feel like stepping into a mega-synagogue.

“This is, kind of, the future of Judaism,” said board member Susan Fishman, who has belonged to the congregation for a decade. Standing outside the synagogue, Fishman welcomed the move: “We have to find a way to embrace interfaith marriages in some way.”

Leaders here see their organizational or rabbinical decisions affecting not only their congregants, but also Jews outside the synagogue’s pews. In the past, B’nai Jeshurun has been a leader among American congregations; their spirited Friday night services, for example, set a fashion for synagogues across the country. This new move was not taken lightly.

In a private video announcement to congregants on Thursday, Rabbi José Rolando Matalon called it a “momentous turning point.”

Matalon said rabbis at the synagogue would now be officiating weddings of Jews and non-Jews, as long as they promise to raise their kids as Jews, exclusively. A non-Jewish partner is welcome in a marriage ceremony and inside the synagogue, if they leave their non-Jewish religion at the door. Not interfaith, maybe, but something a little more inclusive than past practice, in which B’nai Jeshurun refused to conduct such weddings.

“We are embracing a significant change in how we approach the future of Jewish life at BJ,” Matalon said, calling it a “shift in emphasis in the way we relate to and invite in intermarried couples.”

The announcement is the culmination of a year-long program for community members and leadership at the synagogue, which has included webinars, online discussions and a lecture series. Talks were billed with ambitious titles, like “Jews and Judaism: What Determines Communal Norms?” and “What Does it Mean to be an American Jew Today?”

The transparency appears to be in part an effort to avoid any tensions between the leadership and congregants over a charged topic. In years prior, rabbis at the synagogue triggered tensions by publicly celebrating the vote by the United Nations to upgrade Palestine to observer-state status — a political position controversial to some congregants.

With this new intermarriage move, they’ve gone to great lengths to be transparent. It’s unlikely the ultimate decision will surprise members, but there is still the chance there will be pushback.

“No one has a crystal ball,” Rabbi Felicia L. Sol said.

The move comes as intermarriage rates continue to rise and other Jewish denominations are grappling with similar existential issues. The Conservative movement — situated between the traditional Orthodox and more liberal Reform denominations — has long struggled to balance what they see as their signature embrace of modernity with the strictures of Jewish tradition.

Individual Conservative synagogues are now allowed to accept non-Jews as members in a limited way. Meanwhile, some rabbis are defying the Conservative restriction and officiating at weddings on their own. Just last week the charismatic Israeli-born Rabbi Amichai Lau-Lavie broke ranks with the Conservative movement over the issue — vowing that he would perform marriages between Jews and non-Jews despite any prohibition.

While B’nai Jeshurun has historic and cultural ties to the Conservative movement, they are not officially affiliated and fashion themselves post-denominational. This has given them more ritual and political leeway.

It has allowed them to fashion themselves, and also be seen as, pioneers.

“They have an influence outside the community,” said Ari Kelman, a professor of education and Jewish studies at Stanford. “People look to B’nai Jeshurun for leadership.”

For decades, the congregation has walked a fine line of seeking to offer both traditional rigor and progressive values.

“They have sought to be cutting edge but simultaneously respectful of maintaining traditional practices,” said Ayala Fader, a Fordham University professor who has done ethnographic research within the community.

The move is also in a part a response to the facts on the ground. Congregants at the synagogue are already intermarrying, just being forced to go elsewhere for a ceremony.

In a phone interview with the Forward, the congregation’s rabbis explained what led to the move towards welcoming non-Jewish spouses in weddings. ‘

“We’re not doing a lot of weddings,” Sol said. “The status quo was an unsustainable status quo.”

Demographics have already shifted and now they’re responding to that shift.

The new intermarriage ceremonies will not involve the signing of a ketubah, a traditional Jewish marriage document, but another type of ritual agreement called a tenaim, which has traditionally been used as a sort of Jewish engagement agreement. The couple would vow to live a “Jewish life,” as outlined in such a document.

Though now embracing intermarriage, the community decided to hold to the traditional position that Jewishness is transmitted through a child’s mother. Since the 1980s, the Reform movement has accepted the Jewish identity of children of Jewish fathers and non-Jewish mothers.

This appears to be another way for B’nai Jeshurun to distinguish themselves as neither clearly holding to Conservative or Reform traditions.

While they are undeniably pulled into the debates embroiling the other denominations, they “like to see themselves as a very eclectic synagogue,” said Mark Kligman, a professor of ethnomusicology at the University of California Los Angeles who studied the community.

“Over the last twenty years, they’ve really tried to innovate and place themselves on the cutting edge,” said Kligman. “They see themselves as the model for post-denominational Judaism.”