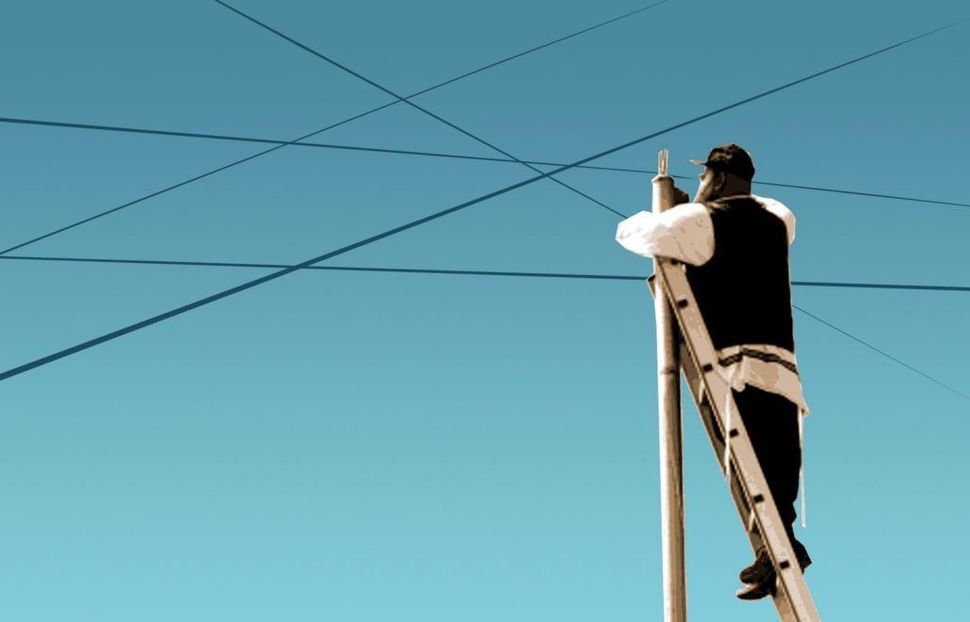 More than 200 residents of the New Jersey suburb of Mahwah packed a local park Monday night to celebrate what speakers called a victory against a potentially negative influence on the wealthy town.

It wasn’t an upsurge in crime or some kind of unwanted real-estate development that had them so riled up. It was the construction of an eruv, or Jewish ritual boundary — and the ultra-Orthodox who they fear would surely follow.

“People aren’t going to move into our neighborhoods tomorrow,” an organizer named Robert Ferguson told the crowd, which broke into cheers. “But stay aware.”

The rally was organized by a community group called Mahwah Strong and was called to support local officials’ decision that the boundary violates zoning rules.

The opposition to the eruv reflects concern among non-Jews and secular Jews over the impact that a fast-growing Orthodox population could have on Mahwah and other leafy towns in the far northeast corner of the state along the border with New York.

But some Jews call the opposition to the eruv a fig leaf for anti-Semitism.

“It doesn’t mean that an entire area will be taken over,” Rabbi Chaim Steinmetz of the Monsey Eruv, the group that erected the boundary on power poles, told Voz Is Neis. “It is simply done as a service for the Jewish people who live there.”

The Monsey Eruv Fund, which is based in nearby Monsey — a town with a large Orthodox population just 6 miles from Mahwah, across the state line in New York — won approval from the local utility company to post the pipes in March. It said the boundary would mostly serve Jews who live in New York but need to cross the border into New Jersey on Shabbat.

But after opposition to the move gathered steam, a Mahwah city engineer recently ruled that the eruv, which extends for 26 miles, violated local rules against posting signs.

Mahwah’s mayor says the boundary, which consists mostly of plastic piping, must be removed by August 4.

He framed the move as a common sense interpretation of local laws, and suggested it was not aimed at keeping ultra-Orthodox newcomers out.

“This sends a very strong message to those who choose to violate our sign ordinances,” Mayor Bill Laforet said, according to the news website NorthJersey.com.

Rabbi Barry Diamond, who leads a Reform congregation in Mahwah, said he supported the removal of the eruv. He said that locals had “legitimate concerns” about how some Orthodox and Hasidic communities interact with the wider community when they move into an area.

Diamond said he does not believe opposition to the eruv is rooted in anti-Semitism.

But the comments on a website opposing the eruv tell a different story.

The petition’s website includes comments like, “I do not want to see the town that I love and grew up in get ruined by a group that does not benefit the town in any way,” and, “I don’t want my town… infested with these nasty people.”

More than 1,200 people have signed the online petition.

Some prominent voices, including the Anti-Defamation League, have also denounced Mahwah for resisting the construction of the eruv.

“The eruv is a reasonable religious accommodation and should stay,” Jonathan Greenblatt, national director and CEO, wrote on Twitter.

An editorial on NorthJersey.com strongly opposed the removal, saying that much of the opposition to the eruv may be opposition not “against signage, but… against Orthodox Jews.”

“No town can decide who gets to move in based on religion, race, gender or sexual orientation,” the editorial read. “And no town should be embracing a ‘zoning ordinance’ that is used… to make it harder for members of a religious community to live and worship.”

Mahwah, once heralded as one of the state’s “Best Places To Live” by New Jersey Monthly, is 85% white and has a household income of 107,000. Just 30 miles from Manhattan, it has enjoyed a boom in recent years as wealthy residents push further into what was once horse country.

The town does not yet have a sizable Hasidic population. But longtime residents have watched as a number of nearby towns in New York have become transformed by a rapid influx of new ultra-Orthodox residents.

For example, in the Rockland County city of East Ramapo, the Orthodox-dominated school board has cut hundreds of teachers and millions of dollars in student programs in the past few years. Ultra-Orthodox families typically send their children to private yeshivas, not to the local schools.

And in Orange County, the efforts of the Orthodox city Kiryas Joel to expand by annexing acres from the nearby Town of Monroe have met with opposition — and court battles — from community and conservation groups.