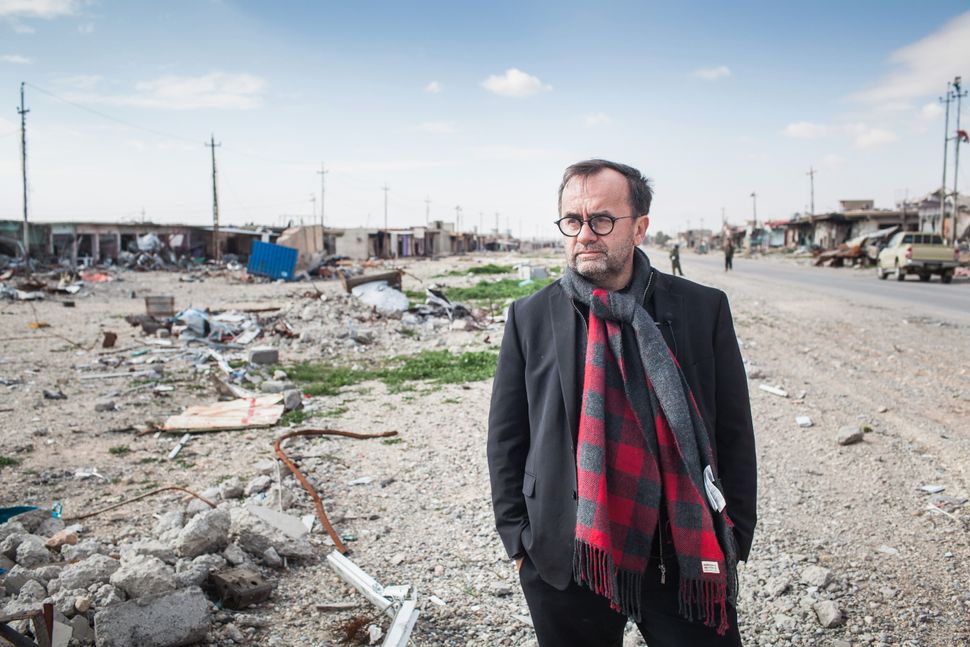 She was 22 when she was sold to a high-ranking soldier in the Islamic State group.

And she knew she was privileged, getting a high-ranking husband. After all, most Yazidi girls are sold 25 times at minimum. Being owned by a high-ranking official meant she would most likely be kept for longer.

Every morning, her husband would take her along on his walks through his military camp. She would follow him, bedecked in a niqab, forced to watch him torture prisoners.

“One morning, I saw him behead 75 men, one after another,” the young Yazidi woman said in an interview later in a refugee camp.

Father Patrick Desbois, her interviewer, gestured for the young woman to pause. He turned to his co-worker, Costel Nastasie. “I am finished for today,” he said. “I cannot go on.”

“Let’s keep going,” Nastasie pressed him. “We have more questions.”

After another hour of harrowing stories, Nastasie paused the interview and turned to Desbois. “I’m done for the day, too.” He needed to get out, to breathe.

Desbois has made a name for himself as the French Catholic priest who is devoting his life to Holocaust studies and to the improvement of Catholic-Jewish relations. Most famously, he has embarked on a mission across Eastern Europe to find unmarked graves of mass killings of Jews during the Holocaust, under his not-for-profit Yahad-In Unum. His search for graves involved thousands of interviews with local villagers across Ukraine and Belarus, witnesses who had never spoken before about what they had seen during the war years.

But today, Desbois has turned to a new project – one that is less concerned with the past, and more focused on the present. His latest book, “La Fabrique des Terroristes: Dans les Secrets de Daech” (‘The Terrorist Factory: Inside ISIS’ Secrets’), co-written with Nastasie, is set to be released in English next year.

“I decided to go to Iraq with a new project called ‘Action Yazidis,’” he said in an interview with the Forward. “We began the same methodology as our work with Holocaust witnesses and survivors. Only now, we are interviewing survivors as soon as they escape. What IS is doing is dividing the family taking the newborns and placing them in IS families: Bboys are sent to military training camps, girls are checked for virginity by doctors and sold in groups by 100-300 at a time, while older women are used as human shields. Everybody has a purpose. If there is no purpose — if they’re too old, too sick or they make problems, they kill them. We can identify this strategy. It’s nothing new,” he said.

Action Yazidis, an initiative of Yahad – In Unum, collects and catalogs testimony from survivors of IS atrocities. ”This is a criminal investigation,” Desbois said. “We want to put names in front of an international court, so these criminals can be judged not only as terrorists, but as perpetrators of crimes against humanity.”

A young woman named Nasrine, in an interview posted on YouTube, tells of a Iraqi-born IS soldier who bought her as a sex slave and brought her to a hotel room, where she was repeatedly raped by him and four other guards. “They called me Khadama, servant,” she says. The interviewer asks repeated, detailed questions — asking for names and origins of the rapists, for descriptions of the families of the perpetrators, of the buildings she saw.

Another interview features a mother, sold many times, who bore a child to a Libyan soldier. “The man didn’t like this child,” Desbois said. “So he broke his leg, his nose, and then threw him at high-speed from a car.” The child, who was smuggled out by his mother, is now years old and completely disabled.

“There is no limit to the violence,” he said.

Now, Action Yazidis runs a safehouse in Cham Mushko in Iraqi Kurdistan, for Yazidi women, featuring a sewing workshop, where trained therapists teach refugees with severe traumas how to sew. “The place allows survivors to meet, to speak about their past and think about their future, because sadly, no men will come back,” Desbois said. “We see a huge change in them. Though I don’t know what’s next for these women.”