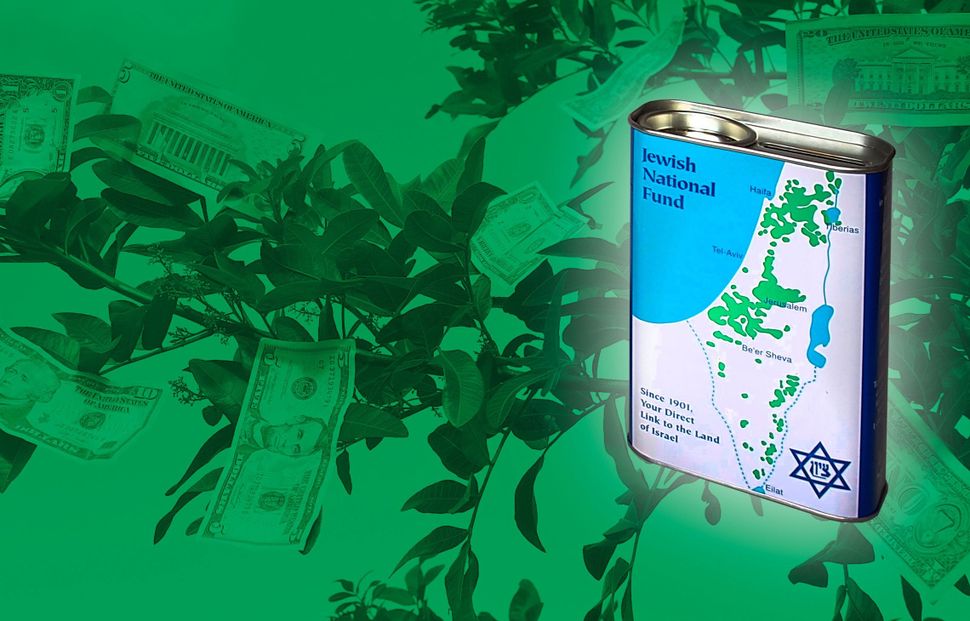 Before the founding of the State of Israel, American Jews dropped their nickels and dimes into the blue charity boxes of Jewish National Fund to help Zionist settlers make a Jewish homeland in Palestine.

Their coins bought the land and founded the settlements on which the modern state of Israel was built.

A century later, American Jews remain loyal to JNF and its blue boxes, giving hundreds of millions of dollars a year to the historic Zionist institution.

But the Forward has learned that the American charity operating under the JNF name has effectively stopped funding the Israeli organization it was set up to support, making just 1% of its grants to the Israeli JNF in 2015.

For most American Jews, the two groups are indistinguishable, sharing a name and a history. The American JNF never announced publicly that it had essentially stopped sending money to the Israeli group. It continues to claim the legacy of the Israeli JNF, stating on the side of the latest edition of its blue charity boxes, on the history page of its own website and even in its tax filings that it was founded in 1901 — the year the group that became the Israeli JNF was founded. The American JNF was not set up until the 1920s.

The revelation that the American JNF now sends just a small fraction of its grants to the Israeli JNF raises questions about the identity of the historic Zionist group at a time when the American organization is raising more money than ever before.

Expert said that the American JNF’s course away from its historic beneficiary, and toward projects picked by wealthy donors, tracks with broader trends in Jewish philanthropy.

“It is a trend that donors want to be more involved, want to be more aware of what’s going on,” said Hanna Shaul Bar Nissim, a postdoctoral fellow at the Cohen Center at Brandeis University. “These donors speak Hebrew, they fly here once a month, they’re more informed of the issue and dilemmas of Israeli society than many Israelis.”

The American JNF existed for decades solely as a pipeline for American dollars sent to the Israeli group, which still owns a tenth of all land in Israel. Today, that pipeline is all but empty. Instead, the American JNF is funding its own projects: building new communities in the Negev desert, buying equipment for Israeli firefighters and supporting a visitor’s center at a West Bank settlement, among others.

In a 2016 email obtained by the Forward, the CEO of the American JNF, Russell Robinson, acknowledged that his organization no longer provides any general support to the Israeli JNF. The American JNF opened a new headquarters of its own in Jerusalem in 2016.

“We fund specific projects with detailed financials approved” by our board of directors, Robinson wrote. “We have our own office in Israel and support our own donor-driven work.”

A spokesman for the American JNF, Adam Brill, would not acknowledge any change in the relationship between the two groups. He said that two organizations have “been separate entities since 1926,” but he would not respond to questions about the near-cessation of funding for the Israeli JNF. 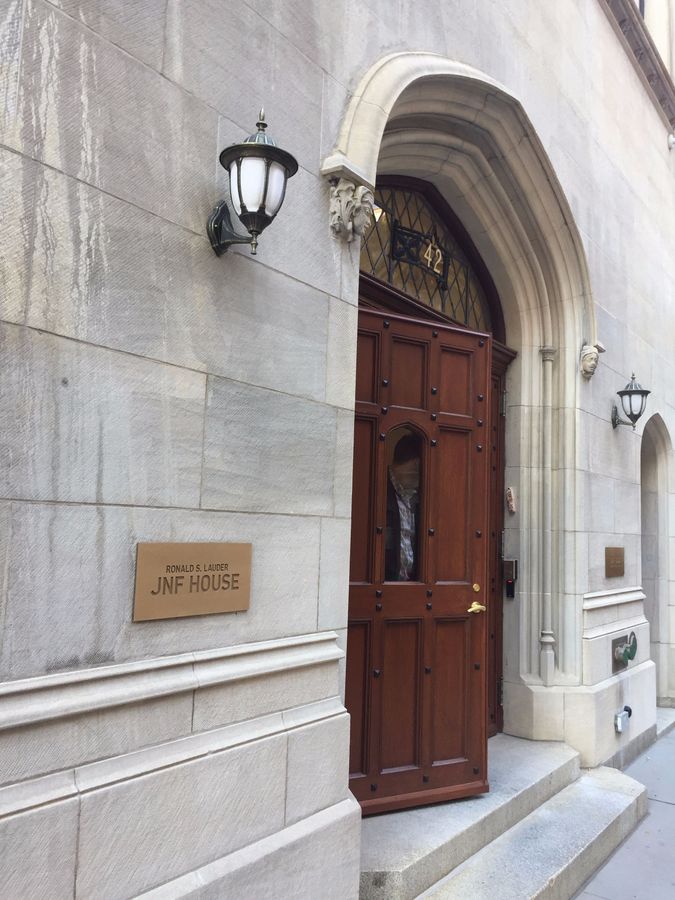 The American JNF’s headquarters on Manhattan’s Upper East Side. Image by Josh Nathan-Kazis

In 2015, the only Israeli JNF projects that the American JNF reported supporting in its financial disclosures were $293,000 for tree-planting and $50,000 for bike trails.

Israeli JNF world chairman Danny Atar said in a statement to the Forward that the Israeli and American groups continued to collaborate on projects. “The relationship between these two bodies is not measured by the amount of money that passes through [the Israeli JNF], since there are many projects that take place in full coordination with [the Israeli JNF], with costs reaching hundreds of millions of NIS,” Atar said.

“I see it as a dangerous precedent in terms of other JNF branches around the world,” said Mike Nitzan, a vice chair of the Israeli JNF. “There were numerous attempts to… try and iron those things out. The [American JNF] reached the conclusion that they could best serve their donors by running an independent organization.”

Based in a landmarked 1920s mansion on an exclusive block on Manhattan’s Upper East Side, the American JNF has emerged since 2015 as among the richest organizations in the Jewish communal firmament.

The American JNF’s assets topped $300 million that year, with a record-breaking bequest pushing its revenue that year over $200 million, more than all but the largest Jewish federations.

The group has spent millions in recent years on what its president called “housekeeping projects.” Its mansion headquarters, across the street from the Austrian general consulate and down the block from a Dolce & Gabanna, received a $16 million facelift completed in 2016.

It has also been generous with its leadership. As the Forward exclusively revealed in late July, the American JNF made over $700,000 in loans to Robinson and its chief financial officer in 2015, apparently breaking New York charity law in the process. Following the Forward’s report, both Robinson and the CFO agreed to repay their loans.

The American JNF’s financial health represents a remarkable comeback for an organization that, in 1996, was wracked by a major financial scandal. Media reports at the time forced the organization’s board to conduct an internal audit that found that while it had claimed to send 70% of its expenditures it Israel, it in fact sent only 21%.

Following the report, the American JNF brought on new senior staff, including Robinson. Perfume heir and philanthropist Ronald Lauder became president of the board of directors. Lauder, a confidant and friend of President Trump, remains the board’s chairman, and used his role at the American JNF to catapult him into the highest levels of Jewish communal leadership, including the chairmanship of the Conference of Presidents of Major American Jewish Organizations.

Once situated, Lauder and Robinson began to slowly peel the American JNF off its Israeli beneficiary.

Lauder “brought on a lot of heavy hitters and people who had not been involved with JNF,” said Alon Tal, a professor at Tel Aviv University who served on the board of the Israeli JNF for over a decade. “Their attitude was different.”

A former member of the board of the American JNF, James Schiller, said that his group had been frustrated by the slow pace of the Israeli organization’s work.

“It wasn’t responsive to our donors,” Schiller said of the Israeli JNF. “That’s when [the American JNF] started to branch out and do things more on their own.”

Nitzan said that the growing independence had frustrated the leadership of the Israeli JNF. “Early on when it happened I think the resentment was very high,” he said.

The conflict came to a head in 2005, as the American JNF began to make grants to other charities in Israel. An Israeli JNF official told the Forward in March of that year that the donations represented “total disloyalty to the original course of the organization.”

Israeli JNF leaders were angry that the American JNF was using its name and symbols, including the famous blue box, while sending some of its money to other causes. Tal said that some leaders on the Israeli JNF’s board wanted to sue the American JNF over the use of the name.

Instead, the two groups made peace in 2008, with the two sides agreeing that the American JNF could continue to use the name “Jewish National Fund” and the blue charity boxes, even if it was raising some money for other causes.

The deal, Nitzan said, “more or less set the precedent for the [American] JNF becoming an independent organization.”

In the intervening years, changes in rules for American charities meant that the American JNF was no longer required to identify the recipients of its overseas grants. It only restarted identifying its overseas grantees for the tax year ending in September 2015, following a pressure campaign from the rabbinical human rights group T’ruah.

As such, it’s not clear exactly when the American JNF turned off the spigot. But in 2015, the American organization reported making $29.7 million in grants, with only $343,000 going to the Israeli JNF.

Brill, the American JNF spokesman, did not directly respond to questions about the grants, or about the relationship between the American and Israeli groups.

The Israeli JNF itself has grown increasingly controversial. The organization has been wracked by scandal in recent years, along with heavy criticism for its role in the demolition of Bedouin villages.

“81% of JNF-USA’s funds are spent on programs and projects, the majority of which is earmarked by our donors for the specific projects they want to support,” Brill wrote. “While we work closely with KKL-JNF in Israel, we have full confidence in our Board, and the many members in lay leadership roles, as the best financial stewards of their donor dollars.”

Nitzan said that among the leadership of the Israeli JNF, some members are seeking rapprochement with its estranged American cousin. Some board members, he said, are “a little bit more resentful.”

Others are “trying to reach a middle ground and to bring the [American JNF] back into the fold.”