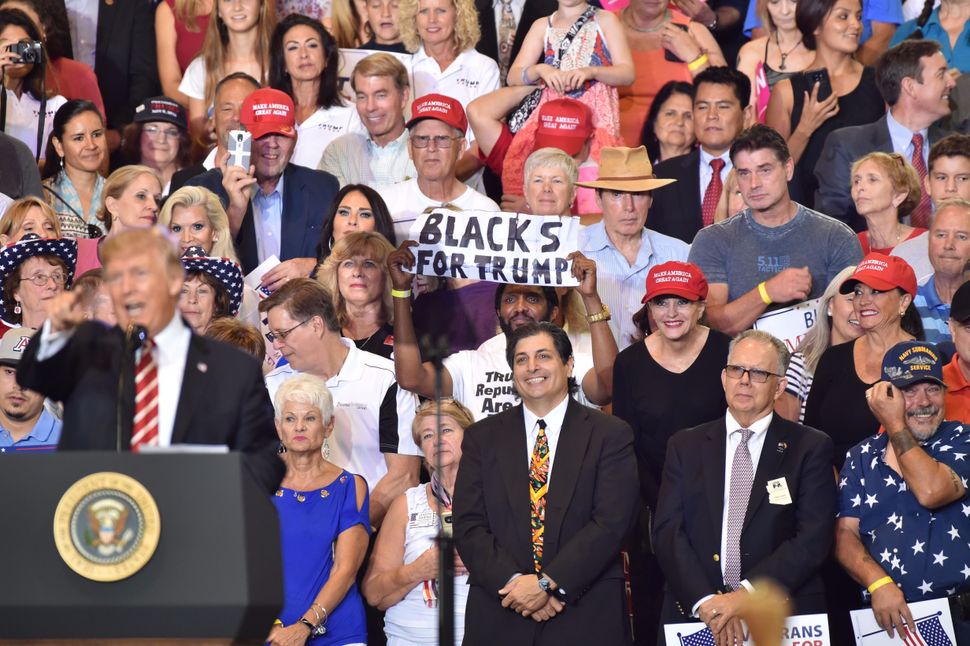 Who is “Michael the Black Man”?

Spotted earlier this year at Trump rallies enthusiastically hoisting “Blacks for Trump” signs, Michael Symonette is back in the national spotlight after scoring a prominent seat at Trump’s rally this week in Phoenix.

He’s not your typical political activist, though. He holds particularly unusual beliefs about ancient history, global conspiracies and how Trump was elevated by God — to lead whites and blacks alike to spiritual freedom.

Symonette was also once a follower of Yahweh ben Yahweh, a charismatic Hebrew Israelite teacher who led a fringe religious group that flourished in the 1980s — but broke apart following a series of grisly murders. Yahweh was found guilty of conspiracy to commit murder, went to prison, and died there in 2007. No leader stepped in to take his place, with a number of factions vying for authority. 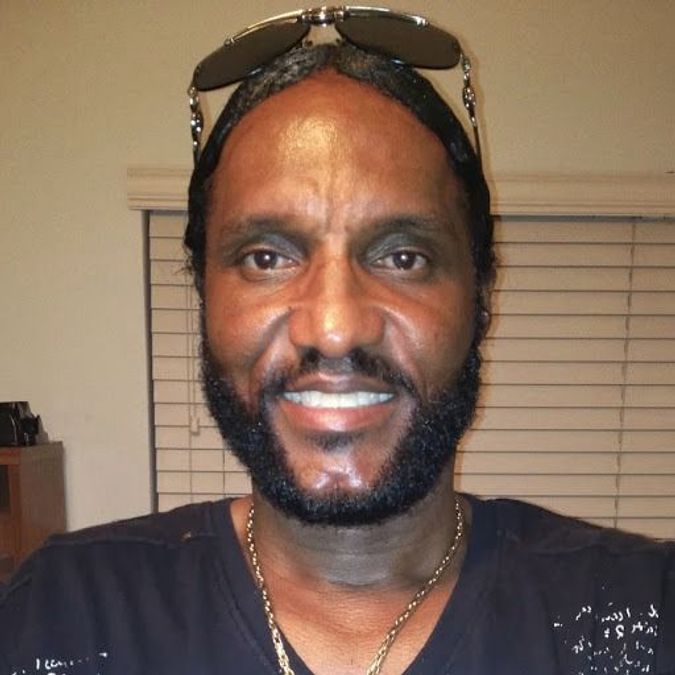 Now, Symonette is trying to boost his own spiritual brand by claiming the mantle of his guru’s spiritual legacy.

“He wants to put it in our heads that Yahweh Ben Yahweh left him with some amount of authority,” said Khalil Amani, a former member of the group who remains close with members of Symonette’s family. “He wants to be a player in the Hebrew Israelite movement.”

How exactly is he doing that? By likening himself to the biblical angel Michael.

“He’s put himself as the angel Michael,” Amani said. “He believes that he is actually in the scripture as the archangel and that Yahweh gave him a certain charge to do a certain work.”

Symonette’s winding spiritual path begins in Florida. He was born Maurice Woodside and grew up with Amani in Miami. The two were fraternity brothers at a community college and began exploring alternative spirituality around 1979.

Amani and Symonette came across literature of the Nation of Yahweh and were transfixed. Like other Hebrew Israelite groups, Yahweh taught that blacks were the true genealogical descendants of the biblical Israelites, and that this sacred heritage had been stolen and hidden from them for centuries by whites. Modern day Jews, the Nation of Yahweh literature taught then, were imposters — and black Americans were the true Jews.

“I introduced the Hebrew Israelite teaching to Maurice,” Amani wrote in a blog post about his relationship with Symonette. “We all jumped headlong into the Nation of Yahweh.” 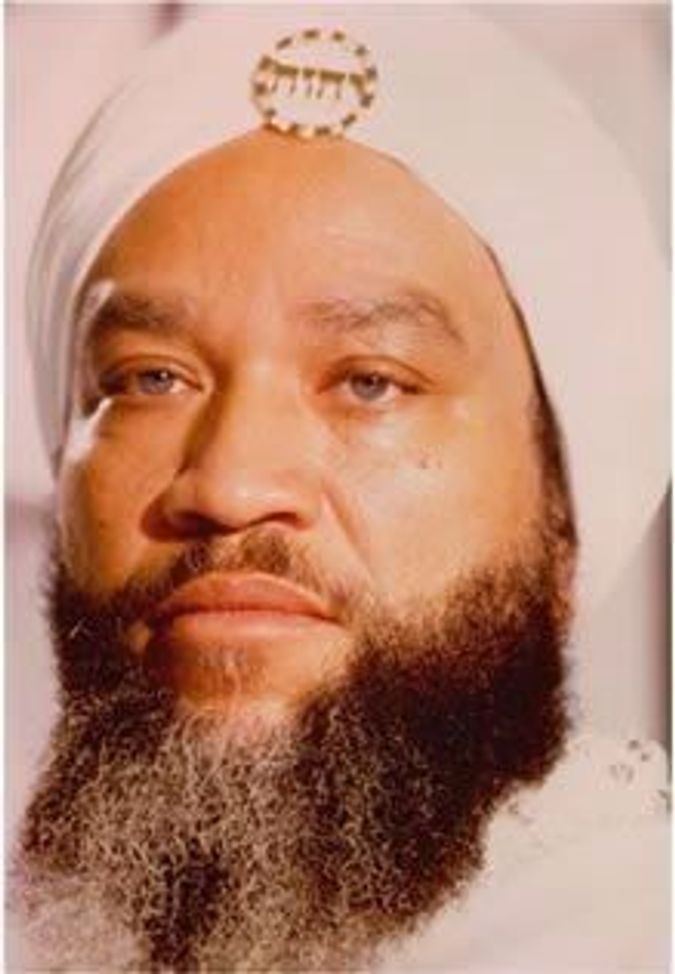 The charismatic leader Yahweh Ben Yahweh died in 2007, but Symonette still professes allegiance to his guru. Image by YouTube, abc/youtube

At its height in the 1980s, the group claimed thousands of members nationwide. Their leader rose to power as Miami was reeling from violent crime waves and a drug epidemic.

“To a young black man trying to find himself in America it was fascinating,” Amani said.

But there were chilling reports of violence at the center of the community. In 1991, Yahweh was charged with conspiracy in a series of brutal killings that involved a beheading. Along with 14 other members of the group, Symonette was charged for having a role in the murders, but acquitted. Yahweh, however, was convicted of conspiracy and sentenced to 18 years in prison and died in 2007.

Trump’s unlikely fan is making his own bid for relevance.

Symonette has his own organization, made up mostly of remnants of the Nation of Yahweh, called BOSS, or “Brothers of a Superior Status.” (“The idea is that black men are the real chosen people,” Symonette’s nephew told the Miami New Times. “They stand above everyone else.”) Symonette has also made a name for himself as an outsize character in Miami, hosting lavish parties and making inflammatory comments in right-wing political circles.

Symonette rants on the radio against Democrats — who he calls “Demon-crats” and “slave masters” who are secretly aligned with the Ku Klux Klan. He’s appeared at Glenn Beck rallies, called Oprah Winfrey “the devil” and opposed Barack Obama’s bid for president — because he believed Obama was an apocalyptic figure, or “the beast.”

For his part, Symonette has previously denied that he is a leader building a Yahweh-like following. “I don’t have ‘followers.’ I’m not a leader,” he told the Miami New Times in 2011.

But Symonette latched onto the Trump campaign last year and has been riding the train since — and his public persona has only been growing. 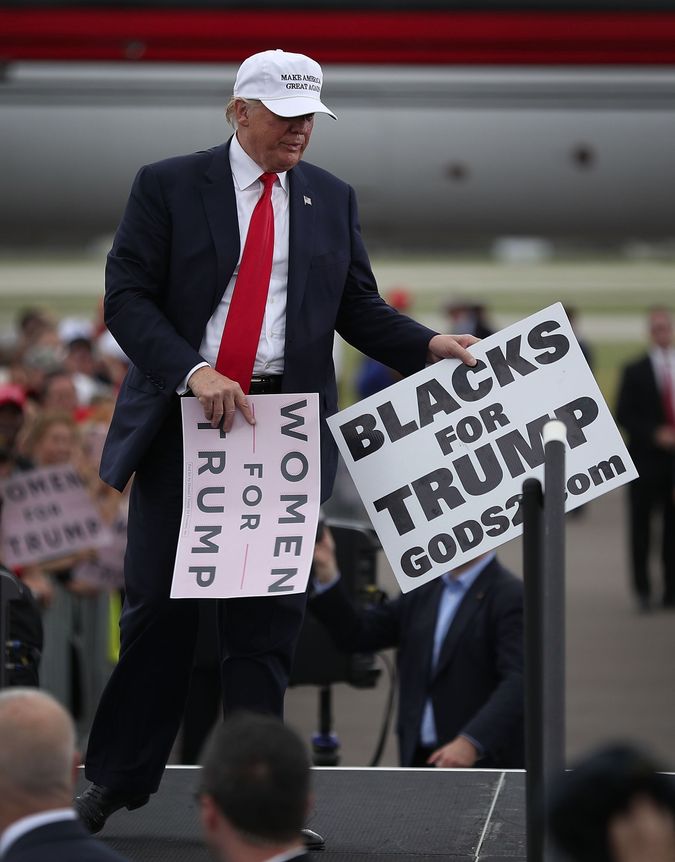 Trump holding Symonette’s “Blacks for Trump” sign at a Florida rally in 2016. Image by Getty Images

His website, Gods2.con, is an amalgamation of esoteric beliefs, political conspiracy theories and imagined history. It draws from his time in the Nation of Yahweh, but veers into new territory as well.

The theology is all his own, and could seem convoluted. But one thing’s for sure: Symonette is basking in the Trump-induced media spotlight.

“He’s got a history of wanting to be in the spotlight,” said Amani. “He’s going to be front and center. That’s who he is, he’s an entertainer.”