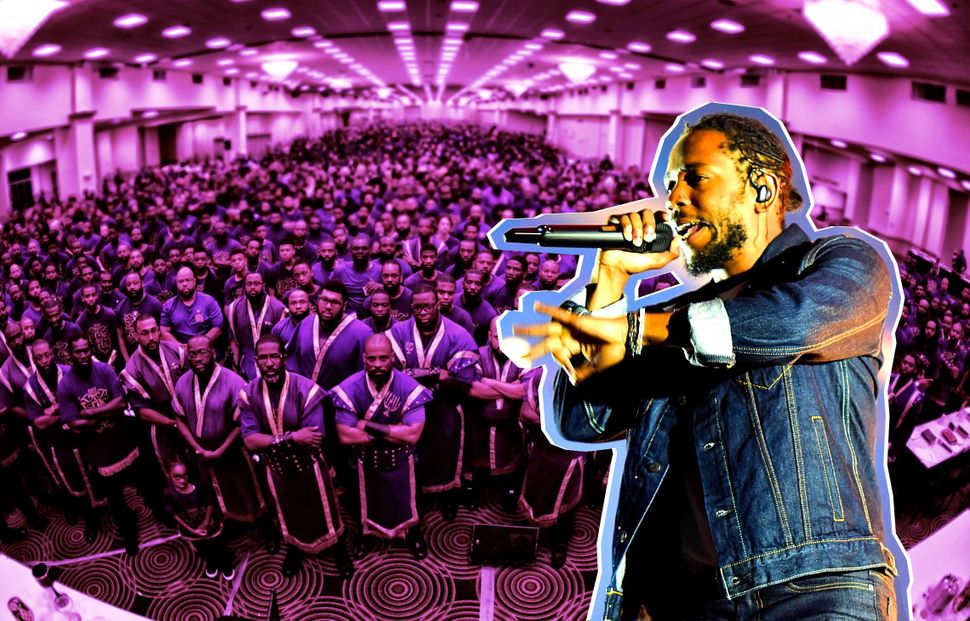 In a rare interview, the charismatic leader of a prominent Hebrew Israelite group welcomed the support of spiritually-seeking celebrities like Kendrick Lamar.

But he candidly warned the superstar against publicly linking himself too closely to the Israelite community — because of possible blowback from fans and the mainstream media.

“It would be better for Kendrick Lamar and these stars to help and assist us from behind the scenes, opposed to coming up and saying, ‘I’m with them,’” Bishop Nathanyel Ben Israel, the leader of Israel United In Christ, said. “I don’t want them to malign him.” 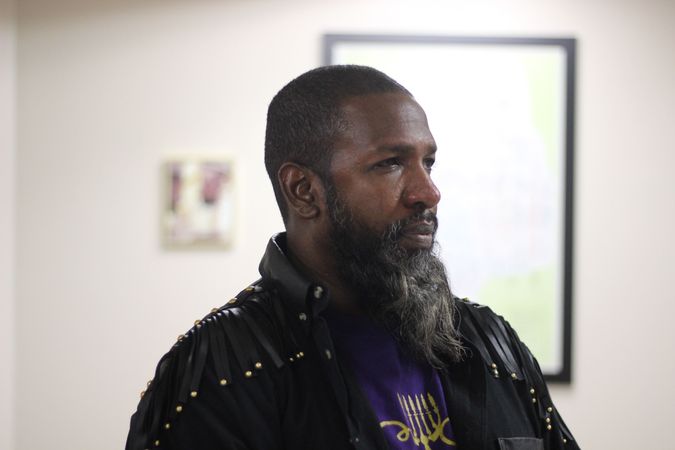 It’s a nuanced position for Nathanyel to take. His group has been branded “black separatists” by the Southern Poverty Law Center and included on the 2017 “hate map” of groups across the country. And, even if Nathanyel rejects that characterization, he recognizes that celebrities might suffer for coming out as allies. “They’ll try to say, ‘Look, Kendrick Lamar is with a hate group,’” Nathanyel said.

Nathanyel sat behind a large desk in the upstairs of the Mount Vernon headquarters of his group, a bound bible open on the table. He wore a purple shirt emblazoned with the name of his organization and a leather jacket with fringes. A thick graying beard spilled down the front of his shirt; on one hand he wore a silver ring with his group’s emblem. A group of stony-faced attendants stood on the perimeter of the room. IUIC is exceptionally guarded and — citing negative interactions with other reporters — requested to film the entire interview for themselves.

IUIC is just one organization in the larger constellation that is the Hebrew Israelite movement. Israelites are people of color, mostly African American, that claim a genealogical connection to the ancient Israelites. The movement is broad and diverse and there are multiple traditions or denominations within the community.

This year, IUIC shot to the spotlight after one of their members appeared on the latest studio album of his famous cousin Kendrick Lamar. Carl Duckworth, who now goes by Karni Ben Israel, belongs to a Florida IUIC branch and influenced his cousin to include some of the group’s messages on his album, including the controversial teaching that black suffering is the result of an ancient curse from God.

Over the course of a far-ranging interview, Nathanyel shared personal details about his own life and efforts to build his community. He also repeatedly lashed out at the SPLC, bristling at the characterization of him as the leader of a hate group. “What hate have we done? Who have we burned or lynched?” Nathanyel said, arguing that his organization should not be equated with groups like the Ku Klux Klan.

On their website, SPLC defends their listing of white and black nationalist groups side by side, but does allow that “black racism in America is, at least in part, a response to centuries of white racism.”

Nathanyel said his group teaches self-reliance and works to empower people of color — and this, he believes, is why his work is so controversial. “This movement is about changing the lives of our people on a positive note,” he said. “That is the fear of waking up the lost sheep of Israel.” 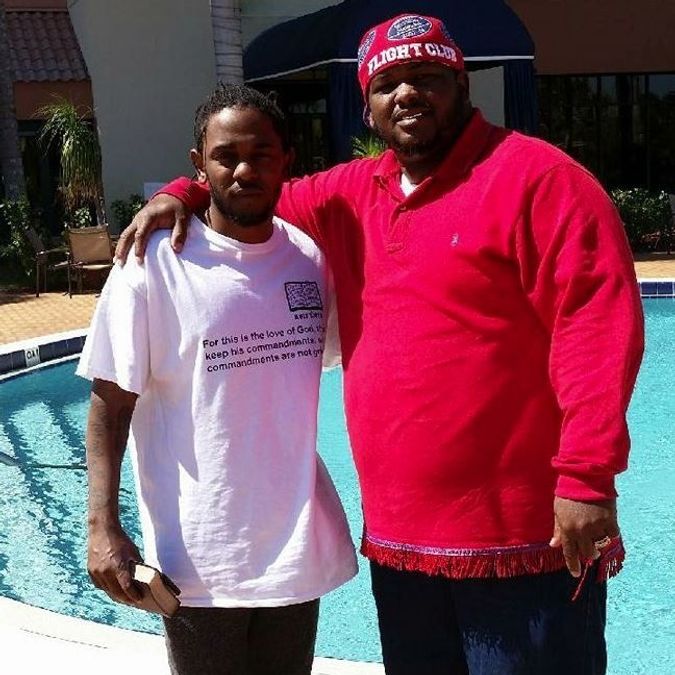 Lamar, left, with his cousin Carl Duckworth, who goes by the Hebrew name Karni Ben Israel.

Along with a number of other Israelite groups, IUIC teaches that blacks, Latinos and Native Americans are the true genealogical descendants of the biblical Israelites — and that this heritage has been stolen and obscured over time. Modern day Jews, IUIC teaches, are imposters and usurpers of Hebrew Israelites’s true heritage. White people, the group teaches, are descendants of the biblical Edomites.

In the fractious and diverse world of the Hebrew Israelites, IUIC has come to prominence over the last decade, rising above rival groups and distinguishing themselves through slick social media campaigns and professional quality videos. IUIC has shown international ambition in recent years, launching missionary trips to Africa, the Caribbean and Europe. The group is also very hierarchical and Nathanyel, who has a background in law enforcement, prides himself on the strict discipline maintained by his members. Congregants carry military-style titles like soldier and officer and may be kicked out of the group if they disobey orders or deviate from IUIC doctrine.

Nathanyel boasted that he and his group are the spiritual vanguards of the Hebrew Israelite movement today. “We are the vanguards of this truth,” Nathanyel said. “There’s no other camp — I’m not knocking them — but … we understand about organization better than all the other camps.”

Nathanyel, previously Nathaniel Ray, was raised in a Baptist church in Harlem. But from a young age, he was drawn to alternative religions and spirituality, experimenting with Afrocentric Egyptology and the Nation of Islam.

In 1990, he joined an influential Israelite school in Harlem known as 1 West. Members would gather in a small store-front church and read the Hebrew Bible and the New Testament. They used their own self-styled version of Hebrew — using distinct pronunciation that leaders said was the pure and ancient version of the language — and promoted the belief that each of the ancient Twelve Tribes of Israel had a clear modern day equivalent. African Americans were from the tribe of Judah, for example, and Haitians were Levites.

The experience was transformative for Nathanyel. “For a young man at that age, it was great,” Nathanyel said. “Learning the Bible, that we are the people of the book, that we do have a history.”

Following disputes with leadership, Nathanyel left 1 West and belonged to a series of other Israelite camps before starting his very own group. In 2003, he founded IUIC, first holding meetings in his New York living room, attended by his family and a small group of supporters.

Today, IUIC members all take on Hebrew names when they join. Nathanyel himself began using his Hebrew name some fifteen years ago, when he entered the community. “Our surname is Israel according to Isaiah 44:5,” one member wrote in a message to the Forward, describing a passage which says the faithful will “take the name Israel.” “It’s a Commandment and prophecy from God,” the member wrote, “that we change our Slave name to our True Biblical name.”

Fourteen years after it’s founding, IUIC claims thousands of members and the group’s message has reached one of the most popular rappers in the country.

Nathanyel said he was taken off guard when he heard his group’s message broadcast on Lamar’s songs and had no idea that the rapper had been influenced by IUIC lessons. Nathanyel didn’t even know who Lamar was before this year.

Some of the younger members had to alert him to the lyrics, he said. “That was a surprise to a lot of us.”