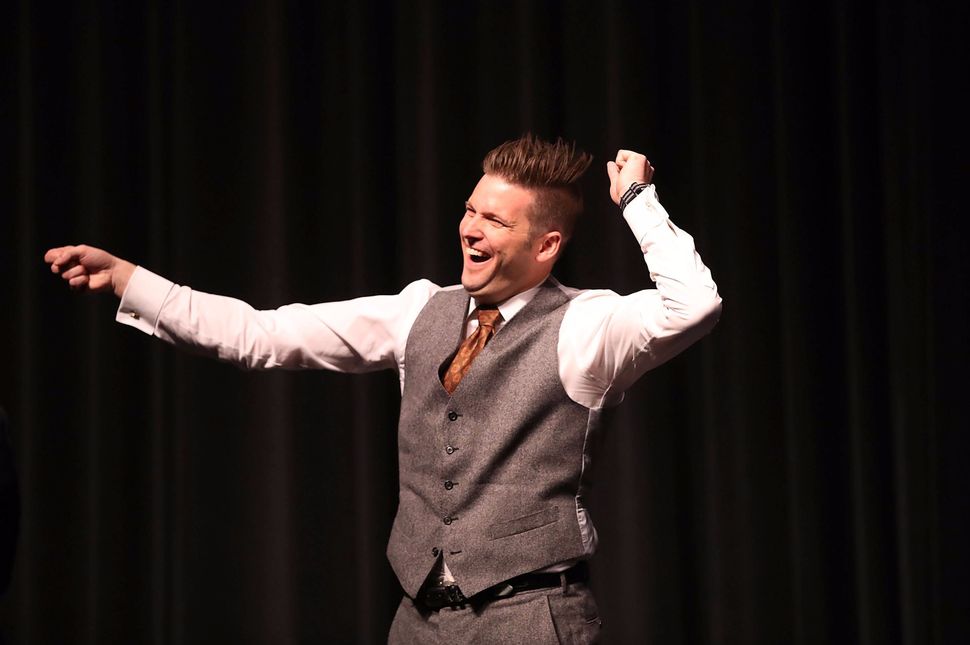 On the day white nationalist leader Richard Spencer was scheduled to come to the University of Florida, the campus was on high alert. The governor had declared a state of emergency and hundreds of counter protestors had shown up. Classes were cancelled; the campus was swarmed with media and helicopters swooped overhead.

At the center of campus, a small group of Jews gathered to do good deeds.

“When there’s so much darkness and negativity on campus, we want to push the message — small acts of kindness can add up,” said Arik Benlevy, a 21-year-old studying advertising.

While the Jewish community stayed away, other vociferous critics of Spencer’s swamped the speech. They chanted and heckled, but the event will likely be cast as a success for the “alt-right” by its supporters. As they see it, the more resistance Spencer and his ilk get, the better. They feed off it.

“The ‘alt-right’ is built on its relationship with opponents,” said Chip Berlet, an independent researcher and author of Right-Wing Populism in America: Too Close for Comfort. “They see themselves as beleaguered heroes facing off against the establishment.”

Hundreds of police officers showed up, creating an overwhelming security presence that included helicopters and officers stationed on rooftops, NBC reported. Authorities announced only one arrest, that of a man they described as a security guard hired by the media, for carrying a firearm on campus. The only apparent violence happened when a man with swastikas on his shirt was punched outside.

As the police strained to keep the peace, Benlevy joined a handful of Jewish students and a rabbi from Chabad as part of what they called a “Good Deed Marathon.” They set up a booth at the center of campus and asked passersby to write their name and pledge to do any sort of “good deed” — from donating blood to simply calling their grandmother. “We aren’t going to stop practicing our Judaism,” Benlevy said.

The campaign was just one way the school’s roughly 6,000 Jewish students responded to Spencer’s controversial appearance. The Chabad Center also ramped up security and increased their hours of operation. Jewish sororities and fraternities on campus were on high alert, with some shuttering entirely. Hillel organized a series of events to coincide with the speech, including an educational talk about anti-Semitism and a “Solidarity Shabbat” to be held Friday.

Jews in the area had reason to be alarmed. Neo-Nazi provocateur Andrew Anglin, the publisher of the website the Daily Stormer, posted the address of the campus Chabad house and urged his followers to target Jews and blacks in the area with a “flash mob.” Anglin, who is known for online “troll storms” targeting his perceived enemies, has never actually been able organize any real world events like his colleague Spencer.

“The Jewish community did a great job,” said Lonny Wilk, the associate director of Anti-Defamation League Florida. “Students found alternative events and safe spaces where they did things that didn’t involve getting into the throes of white supremacist doctrine.”

Spencer popularized the term “alt-right” and fashions himself a “dissident intellectual” who counts figures like former Ku Klux Klan leader David Duke as important influences. His appearance at Florida is part of a broader white nationalist push for recruitment on college campuses. Spencer is particularly media-savvy and enjoys the spotlight. University appearances like today’s talk are also opportunities for Spencer and his cohort to broadcast their message to millions.

While the ADL and some celebrated alternative events like the “good deed marathon,” hundreds rallied to protest and confront Spencer. The audience at his 2:30pm speech was made up largely of protesters — who shouted during the duration of Spencer’s speech, at times drowning him out with boos. Spencer delivered his typical talking points, at one point comparing his dream of a white-only country to Zionism — a intentionally provocative comparison that he routinely trots out, especially when speaking with Jewish or Israeli media.

“Like Jews in the 19th century had an ideal of Zionism,” he said, he has a dream of a white American “ethno-state.”