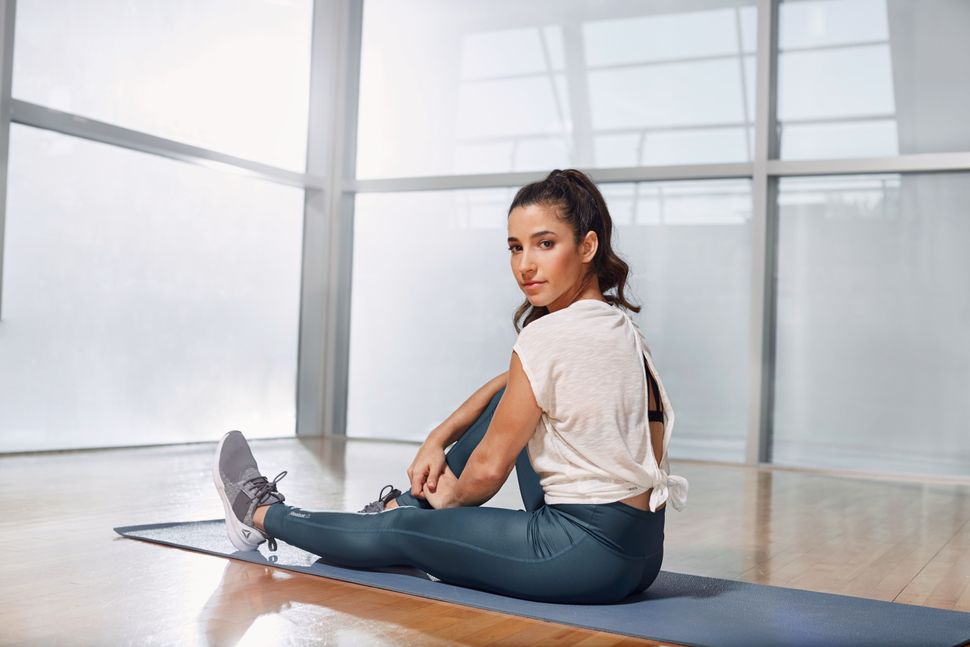 Image by Courtesy of Reebok

Aly Raisman is a three-time Olympic gold medal-winning gymnast, a social media star with over 2.2 million followers on Instagram and now a published author.

But Raisman, age 23, proudly says that she still relies on her parents for guidance.

“I definitely go to my mom all the time for advice,” Raisman told the Forward in an exclusive interview Tuesday. “I’m very, very close to my mom, so I’m very lucky to have her.”

You even seek her out now, as an Olympic champion?

“Oh, yeah. Like, all the time. You’re never too old to get advice from your mom.”

Raisman spoke to the Forward before an event Tuesday at the Hannah Senesh Community Day School, a nondenominational Jewish school in Brooklyn. The school hosts a speaker series, [email protected], that brings in prominent Jews to “reflect on the Jewish values that shape their lives and drive their accomplishments.”

In the past year, Raisman has found her voice, frequently speaking out against social issues and injustices. Raisman is the most prominent gymnast to criticize USA Gymnastics for what she saw as its inadequate response to more than 100 accusations of sexual assault against Larry Nassar, a team doctor for 29 years who has already been convicted of possessing child pornography.

“I think it’s really important to start having the conversations” about these topics, she told the Forward. “I think it’s incredible — I’ve been really, really inspired the last few months by the, I can’t even count all the women…. I am hopeful that the future is going to get better. I think a lot of women are sticking together, and hopefully a lot of men are supporting women, which is very, very important.”

Raisman said in August that Nassar was a “monster”; she claimed that USA Gymnastics was spending too much time trying to “sweep it under the rug.” Since then, her Twitter feed has been filled with praise of other women — like former gymnastics teammate McKayla Maroney and actress Lupita Nyong’o — who have come forward with their own stories of harassment and abuse.

Raisman reflected on the idea that there’s something about Judaism that builds strong women who aren’t afraid to make their voices heard.

“I think for me, being Jewish is all about being close with family,” she said. “I think it’s very family-oriented, which is something that’s really important to me. And I think speaking out and being a strong female, I don’t think you can be that without the support of your family.”

Raisman is also a vocal advocate of eliminating bullying and encouraging body positivity in women and girls. “I think it’s really important for parents to have conversations with their kids early, just teaching them about being confident and focusing on what’s on the inside rather than what’s on the outside,” she said.

“Our society focuses so much on how you look,” she added. “It’s the social media age where everyone’s obsessed with who looks the thinnest, who looks the prettiest, who has the best filter on Instagram. I think we have to focus on teaching kids to value being intelligent and nice and a good person, rather than what they look like.”

During the question-and-answer session at Senesh, moderated by journalist (and Senesh parent) Virginia Heffernan, Raisman recounted similar advice that her parents gave her when she was a young gymnast: “People will always remember you for the kind of person you are, rather than the place you are on the podium.”

Raisman also explained how she has come to realize “how important and how proud I am to be a Jew…. You not only get to represent the United States of America, you also get to represent the Jewish community all over the world. And I think that’s really, really special and something that I take with a lot of pride.” Indeed, she won one of her gold medals in 2012 doing her floor routine to “Hava Nagila.”

Raisman’s book “Fierce: How Competing for Myself Changed Everything” comes out November 14. She admitted to the Forward that writing a book “was actually harder than I expected… but it was a very empowering experience. It was a very emotional roller coaster, because I was really honest, and I felt like I wanted to embrace the tough times just as much as I embraced the good times.”

One of her good times was at Camp Wicosuta in New Hampshire, which she attended as a 9-year-old — despite the fact that her former coaches didn’t want her to take time off from training during the summer. While at camp, she predicted in the camp yearbook that in 20 years, she would be an Olympic gymnast. (In fact, it took her only nine years.)

So, what will Raisman be doing 20 years from now?

“I have no idea,” she said, laughing. “When I was 9, I really wanted to go to the Olympics. I obviously had no idea the hard work it would take to get there, but I just loved it so much. I think in 20 years — it’s a long time away — I’d like to think I’d be a mom, so hopefully being a good mom.”