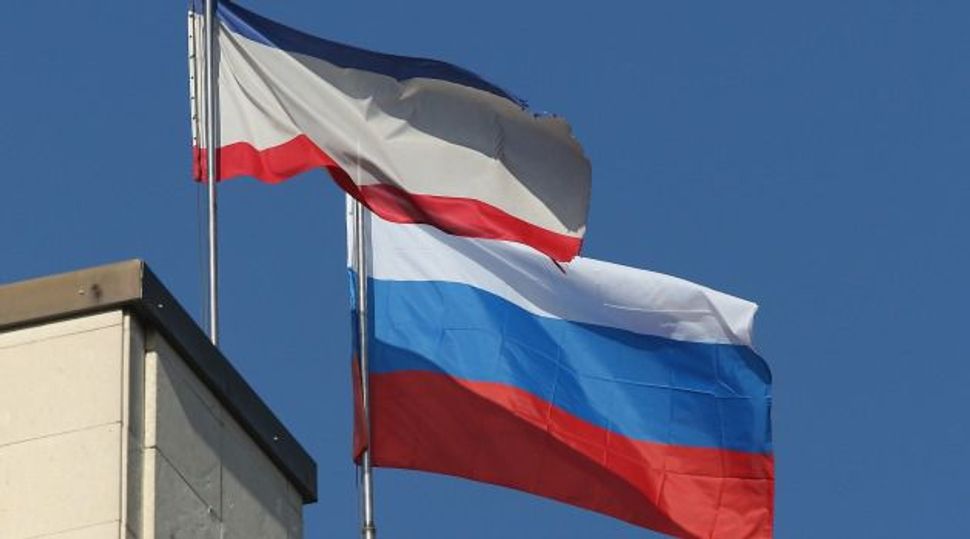 In the hyper-sensitive international atmosphere surrounding Russia’s 2014 forceful annexation of Crimea, even a name tag can create a crisis.

This lesson was learned by Chabad-Lubavitch, the Broklyn-based Haredi group which convened its annual emissaries conference in New Jersey on November 19. Among the 5,600 emissaries, or shluchim, from across the world attending the convention was Rabbi Binyamin Wolf, the Chabad representative in Sevastopol, Crimea’s largest city. His name tag, however, identified him as being from Sevastopol, Russia.

This was not lost on the Russian press, which viewed Rabbi Wolf’s name tag as recognition, on behalf of the largest Jewish organization active in Russia and the former Soviet Union, of the legitimacy of Russia’s occupation of Crimea.

“The main thing is that the document issued by our rabbi clearly reflects the existing reality today: Crimea and Sevastopol are part of Russia,” Ruslan Balbek, member of the Russian Duma who was appointed deputy premier of the Crimean government after the Russian occupation, told state-run news agency Sputnik.

Jewish groups have steered clear of stepping into the debate over Russia’s incursion into Ukraine and the annexation of Crimea. Some have spoken out against Russian aggression, while others focused on helping Jewish Ukrainians stranded in the line of fire. Chabad has also avoided taking any position on the issue, although Berel Lazar, the Chabad rabbi who serves as Russia’s chief rabbi, is known for his close ties with Russian president Vladimir Putin.

Alarmed by the news spreading in Russia, Chabad sought to dispel any notion that the group has accepted Russia’s claim over Crimea. A statement by leaders of the Ukrainian Jewish community called the reports “fake news.” In Moscow, a similar statement from the Federation of Russian Jewish Communities stressed that Chabad is not taking sides in the Crimea debate.

Chabad’s director of media relations, Motti Seligson, told the Forward that name tags for conference participants were prepared by “temp volunteer staff” and “it would be a mistake to read geopolitical meaning into the wording on one of them.” Seligson added that Chabad is “a religious movement, not a political group” and that there were no resolutions relating to Crimea discussed at the conference.

“I hope it was an innocent mistake and neither Chabad-Lubavitch nor any other Jewish organization will lend its hand to sanctioning Russia’s occupation of Crimea,” said Walter Ruby, the chairman of the Greater Washington Muslim-Jewish Forum who has been active on the issue of Crimean Tatar people. “As a people that has suffered from hatred, violence and attempted genocide, we must never justify or sanction the brutalization of another small nation.”