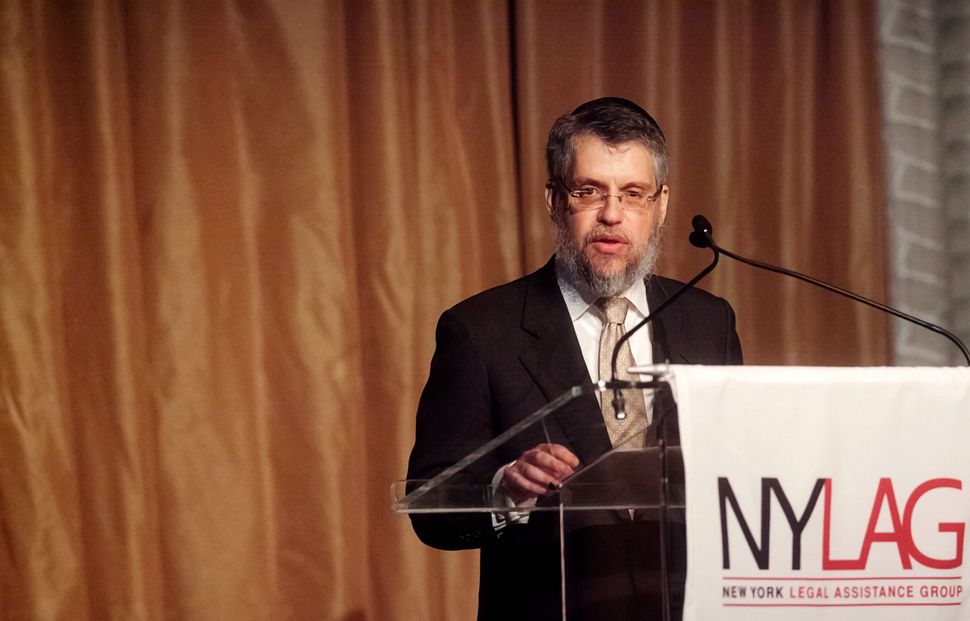 The former president of a Jewish legal services agency admitted today to sending funds from the organization he ran to other charities he controlled. He also admitted that some funds he sent to the other charities were used to repay him for loans and services he had provided.

Yisroel Schulman, who resigned as the head of the New York Legal Assistance Group in 2015, agreed in a settlement with the office of New York State Attorney General Eric Schneiderman to repay $150,000 to NYLAG. He is barred for five years from serving as an officer or director of any charity.

Schulman maintains that he did not know at the time that the funds he was transferring to other charities were NYLAG funds, but has admitted to breaching his fiduciary duty to NYLAG.

NYLAG, which offers pro bono representation to people unable to afford attorneys in civil matters, is prominent voice in matters involving Holocaust survivors. It has close ties to the UJA-Federation of New York.

Schulman’s resignation from NYLAG two years ago has been a lingering mystery in Jewish communal circles, and was one of a number of financial scandals that shook New York’s Jewish not-for-profit community that year. Schulman, who co-founded NYLAG in 1990, is a member of a Lubavitch synagogue in Monsey, New York, and was a well-known figure in Jewish organizational life. At the time, media outlets reported that federal prosecutors were looking into accounting irregularities, but no details were provided.

The federal prosecutors have not brought any charges against Schulman. But an investigation by the Attorney General’s office has uncovered a story of financial misconduct that stretches back over a decade. The settlement came after the Attorney General’s office filed a civil complaint against Schulman in New York State Supreme court alleging that Schulman diverted NYLAG assets for his personal benefit.

“In addition to reaping personal financial benefits, Schulman also made the transfers to enhance his reputation and standing in his community, so that he could appear to be a much greater benefactor of the organizations with which he was affiliated than he could be by using his own personal funds,” Schneiderman’s office said in a statement.

The complex scheme involved millions of dollars moving through more than a dozen accounts. While much of the money made it back to NYLAG, some of it was granted to unrelated charities tied to Schulman without the approval of NYLAG’s board. Meanwhile, the shifting funds meant that NYLAG understated its assets to regulators and donors, making itself look more in need of funds than it actually was.

In a statement to the Forward following the settlement agreement, Schulman acknowledged his wrongdoing. “My conduct in regard to those decisions fell below the high standards that I set for myself, and I now recognize I unintentionally breached fiduciary duties to the organization,” he said. “For that, I truly am sorry…I also want it to be known that although I made mistakes at NYLAG and certainly am not perfect, I never intended to mislead anyone nor took anything from NYLAG or any other charity that did not belong to me.”

Under the laws that regulate donor advised funds, the accounts were officially owned by FJC, while NYLAG had advisory authority over their disbursement. Once out of NYLAG coffers, the funds were almost invisible to the organization, and seem to have been under the control only of Schulman.

At first, the transfers were made with the approval of NYLAG’s board. Later, Schulman shifted the money without informing the board, quietly moving funds that had been donated to NYLAG’s escrow accounts to accounts at FJC.

The majority of the NYLAG funds sent to FJC were eventually transferred back to NYLAG. But in 2008, Schulman changed the name of one an FJC account that held $600,000 in NYLAG funds, removing any reference to NYLAG from its name. He then added other funds to the account, commingling them with the NYLAG money. Schulman maintains that he had lost track of the account and was not aware that the funds belonged to NYLAG.

Schulman directed FJC to make grants to two other charities he controlled, which are not identified in the settlement. In some cases, Schulman had the charities use the funds from the FJC grants to repay money he says the charity owed him.

In 2015, after NYLAG had begun an internal investigation of the accounting irregularities, Schulman had FJC grant $1.25 million back to NYLAG in an attempt end the inquiry.

Meanwhile, the millions of dollars of NYLAG funds held at FJC entirely disappeared from NYLAG’s books for over a decade. That meant that the organization looked far poorer to donors than it actually was.

Schulman admitted in testimony that one reason the NYLAG funds were initially sent to FJC was to make the group seem like it had less money in the bank. At one point in the 1990s, the organization was turned down for a grant because the potential donors believed NYLAG had too much cash on hand.

“Nobody wants to give money to…an organization…when you have…a three million dollar cash surplus,” Schulman told investigators, according to the settlement.

By 2010, interest had grown the amount hidden at FJC to more than $7 million.

The Attorney General’s investigation could have a notable impact on how donor advised funds function. As part of an agreement with the Attorney General’s office, the FJC has committed to close any existing donor advised funds that act as “de facto investments” for public charities, as the NYLAG accounts did. A spokesperson for FJC said that the settlement effects approximately 1% of the assets.

During the course of the investigation, NYLAG has added new internal controls and hired new senior staff. In a separate agreement with the Attorney General’s office, NYLAG agreed to ongoing oversight, board training, board term limits, and to continue its current reforms.

In a statement, NYLAG thanked the Attorney General’s office for its investigation. “We are pleased that the critical legal services NYLAG provides have been unaffected and that NYLAG’s funds are intact,” The organization said. “When this matter was first raised almost three years ago, NYLAG implemented new procedures to ensure the proper safeguarding of funds and has agreed with the Attorney General to keep these procedures in place.”

The FJC, in its own statement, also thanked the Attorney General’s office. “We applaud the actions of Attorney General Schneiderman in detecting and stopping the fraud perpetrated on FJC,” said Timothy Gilles, a spokesman for FJC. “We were pleased to assist in the investigation and look forward to continuing to work closely with the Attorney General and his Charities Bureau to ensure the integrity of the nonprofit sector and the protection of charitable assets in the state of New York.”

Correction: This story has been updated to clarify that Schulman maintains that he was unaware that the funds he sent to other charities belonged to NYLAG.