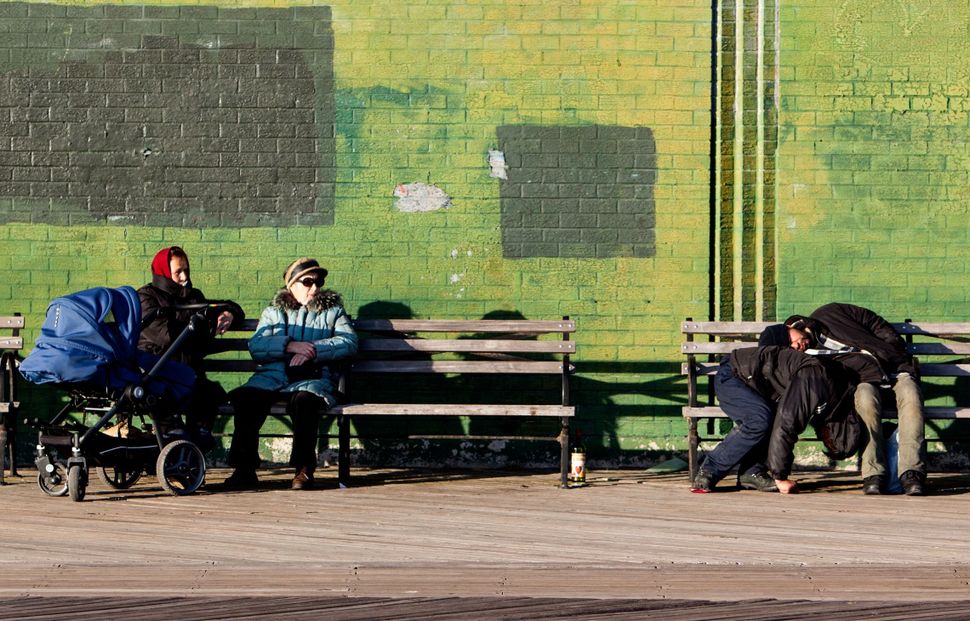 Elga Khananyeva, 28, stole from her family to buy heroin.

Vladimir, 32, started dealing drugs at age 14, two years after he arrived in the United States.

“I can’t get upset every time someone dies anymore,” Dmitry said.

The words “opioid crisis” tend to evoke images of addiction, overdose and death in Appalachia. But rural whites are not the epidemic’s only victims; urban people of color are suffering, as are members of New York City’s community of roughly 300,000 Russian-speaking Jews. The children of immigrants — whose parents are struggling both to provide for and to understand their Americanized offspring — are searching for structure, meaning and connection.

“The parents and grandparents of these kids, you need to understand that they were the victims of cultural genocide in the USSR,” said Rabbi Aryeh Katzin, executive director of Russian American Jewish Experience, an organization in Brooklyn’s Brighton Beach working to strengthen the Jewish identities of Russian youth.

“Their Jewish identities were wiped out. These kids aren’t Russian, American or Jewish. They have no strong identity, which makes them vulnerable to drug use. We try to provide them with guidance,” Katzin said.

Dmitry’s parents had no connection to Jewish values and traditions. “They pretty much had the God thing beaten out of them,” said Dmitry, who asked that his last name not be used. He used opioids for about seven years, starting at age 16, and went to rehab for three years.

The city does not maintain data on opioid addiction by national background or religion, making it difficult to know precisely how many Russian Jews are victims of the crisis. At his busiest, Vladimir, who deals to 20–30 people a day, said that about 70% of his clients are Russian speaking.

What community leaders and caregivers do know is that addicts in the community are especially hard to reach.

“Every community has some stigma about drugs, but I would definitely say it’s worse in the Russian community,” said Isaac Hernandez of Harlem United, the not-for-profit organization running the only syringe exchange in Brighton Beach. “They’re afraid to come for treatment, because they don’t want to be recognized.”

Russian culture is robust in Brooklyn. The language can be seen on storefronts and heard in the streets in neighborhoods like Midwood and Brighton Beach, and traditional Russian food like pierogies and stuffed cabbage is everywhere. Drug addiction remains hidden, giving the sense that “people’s kids are dying and no one knows why,” according to Dmitry.

“I could count on one hand the cases of opioid use in the community I saw before this became a national problem. With parents not around much because they’re working so hard to support the family, the kids are vulnerable to drug culture around them,” Kliger said.

Parental absence played a big role in Elga Khananyeva’s addiction, which started when she was 18 and living in Brooklyn. She used for five years; she went to Florida for rehab and lives there now, in Delray Beach.

Her elder sister, Nora Khananyeva, 33, said their parents were so busy working that she raised Elga.

The elder Khananyeva daughter lived with her parents’ strictness, as they monitored where she went and how she dressed, so she gave her younger sister more freedom — including some drug use. But when Elga Khananyeva started displaying traits typical of addicts, like stealing from the family and becoming so thin that her bones protruded, Nora Khananyeva realized her sister’s life was in danger.

“I was so angry, because I felt let down. I gave her freedom I never had, and this is what happened,” Nora said.

When Nora told her parents Elga was an addict, it took several months for them to accept that she needed treatment. Her father ultimately made the treatment arrangements, but to this day her mother still tries to ignore the issue.

“Americans can’t understand the intensity of the shame Russian parents feel about drugs,” said Alana Manko, a Russian Jewish immigrant working with drug addicts for 27 years as the director of Treatment Alternatives, in Boca Raton, Florida. She treated Dmitry.

Many young Jewish addicts have made their way to her from Brooklyn after hearing about her in the Russian community. Manko said that getting her clients away from their environment helps them start their recovery.

“The Russian mentality is, ‘I’m so strong, I can do it all,’” said Manko, herself the mother of a recovering addict. “But with addiction, you are absolutely powerless. The failure is too much [for parents] to accept, so they deny it.”

Elga said that her parents expected her to live as if she were still in the Soviet Union. They didn’t understand the diversity to which she was exposed. “They always asked me where my Jewish or Russian friends were. I had gay friends, I had black friends. They didn’t understand that,” she said. She posited that her parents’ attitude pushed her toward reckless behavior.

Vladimir, a pseudonym he gave to conceal his identity, said that he turned to drug dealing to keep up with his peers financially. He also used drugs for nine years, and says he is clean now, although he does drink. He lives in the Midwood area of Brooklyn.

His Russian friends told him they were affording nice things, like Nike sneakers, by dealing drugs. “I was nervous about joining in, but I had to adapt to what was going on here,” he said.

Talking about the pressures of adaptation with his grandparents, who raised him after he immigrated, was too difficult. “My grandpa, he’s a concentration camp survivor. They’ve been through so much that they just wanted me to do good, like it was simple,” he said.

Russia is also struggling with an opioid epidemic today. But back in the Soviet era, addiction meant alcoholism, which was shrugged off or regarded as a personal weakness.

Dmitry’s parents had almost no understanding of the danger of drugs before they immigrated to Brooklyn in 1996.

Dmitry earned good grades, a valued achievement that he said caused his parents to miss — or ignore — the fact that he started using drugs at age 13.

“Because of movies, we knew drugs existed in America. But we assumed we would have enough influence over our children to make it clear these things shouldn’t be done,” Dmitry’s parents said through their son’s translation.

Manko treated Dmitry at Treatment Alternatives, and today Dmitry lives in Midwood and has a full-time job, although he did suffer a relapse a few weeks ago. Elga is also clean, and working. They report continued cultural clashes with their parents, and disappointment that their parents still conceal their past addiction out of shame. Dmitry blames these stresses for the relapse.

Vladimir is not yet ready to stop dealing. He did say several times that he hopes to stop eventually: “When you know people are stealing from their families to buy drugs from you, you have to wonder, ‘Am I really doing good?’”

Boris Pincus, Republican district leader for the 45th Assembly District and longtime community advocate, is often a first point of contact for parents looking for help with a child’s addiction.

He is currently helping a group of 12 Russian-speaking, Jewish former addicts, ages 18 to 23, find education and employment through a partnership with Kingsborough Community College. He tries to impress upon them that they don’t have to succumb to the hopelessness of their dislocated sense of self.

“A parent told me their 21-year-old son was addicted and wanted to kill himself. Can you imagine?” Pincus said. “I took him to treatment, now he’s doing better. I tell him, you can work for the Secret Service or join the Army — you can be a productive member of American society.”