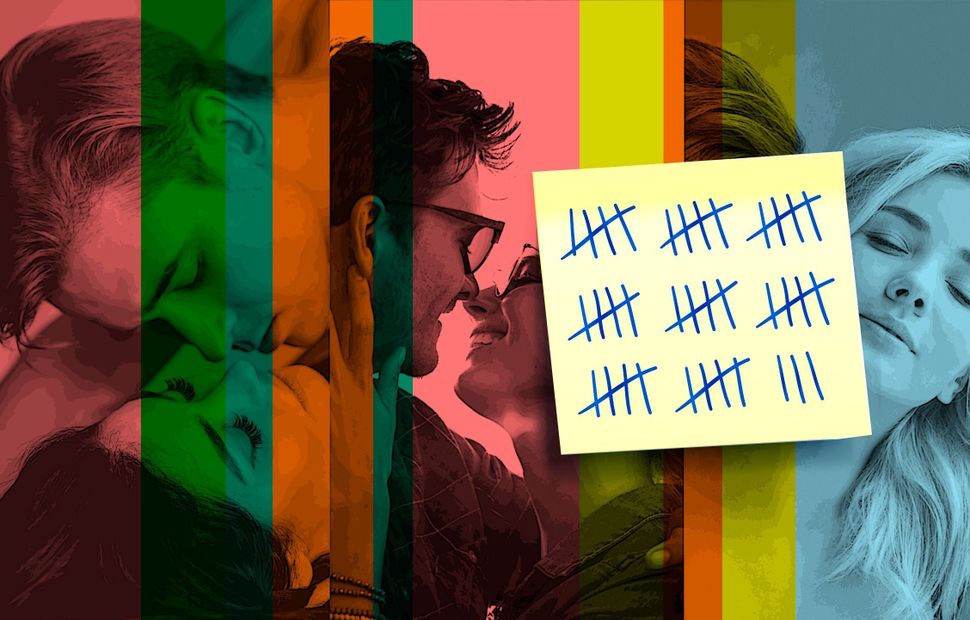 At the annual convention of one Jewish youth group, students whisper about a legendary achievement called “the sweep.”

It’s part of a make-out competition called the “points system” that has been played at each of North America’s four major liberal Jewish youth movements at various times over the past three decades. Under the rules of the game, youth group members compete for points by “hooking up” with higher-ranking student leaders.

“The sweep” is the game’s most revered accomplishment, at least in one youth group’s version. You can score a sweep only at the group’s annual convention, when representatives of all of the nearly a dozen U.S. regions gather for almost a week. All it takes is making out with one person from each of the regions.

“It’s the most mythological, legendary thing to be able to say that you did a sweep,” said one former member of the youth movement, who was active as recently as 2014. “Someone in my chapter tried to do it, but she developed feelings for someone that she found at the international convention before she finished.”

The “points system” and its various rules are an open secret among alumni of America’s four major non-Orthodox Jewish youth movements. Now, amid a culturewide re-examination of attitudes around sex and relationships, the culture of the “point system” is raising new concerns — it links sexual desirability to power. Members earn more “points” for hooking up with youth presidents of local chapters, presidents of regional boards or other higher-ranking members. The Reform movement’s NFTY condemned the game in a resolution passed at its last convention.

The game, which has existed since at least the 1990s, grows out an atmosphere of winking approval by youth group leaders for hookups among student members. At various times, Reform Judaism’s North American Federation of Temple Youth, the Zionist youth movement Young Judaea, the nondenominational BBYO and the Conservative movement’s United Synagogue Youth have all had their own versions of the games. While the youth group leadership has not actively condoned the game in any case, alumni at many of the groups report that staffers were doubtless aware it existed.

“The problem comes in when it is this gross power dynamic,” said Miranda Cooper, who was a member of NFTY from 2008 to 2012, when she said many members kept track of their “points system” scores.

Cooper said that some youth group members ran for leadership positions in order to be worth more points in the game. “It did create a culture, a very tangible culture, of [student leaders] knowing that they were desirable because they have this rank,” she said.

The “points system” game seems be closely tied to the youth groups’ annual regional and national conventions, held annually in hotels in various cities across the country. The conventions see thousands of high school students gather for days at a stretch in hotels, holding meetings and attending panels. Romantic explorations are necessarily a part of the mix, though close supervision by staff often means that “hooking up” is limited to kissing.

For youth group leaders, the hookup culture at conventions may not necessarily be a bad thing.

“One of the really important things about Jewish youth groups is that it brings young Jews together not only to learn together, but also frankly to be together and to begin to establish romantic relationships,” said Rabbi Elliot Dorff, a leading member of the Conservative movement and a professor at American Jewish University who met his wife at the Conservative movement’s summer camp.

Steven M. Cohen, a leading sociologist of the American Jewish community, acknowledged that Jewish youth group leaders summer camp directors have generally been more permissive in allowing teens to pursue sexual relationships than with other notionally forbidden activities, like taking illegal drugs. “Realizing full well that they themselves often met their future spouses in camps or in youth groups, they are very happy if their young people form romantic relationships that they carry forward into life,” Cohen said.

“People with positional power are seen as having some sexual license over people with less power” in the broader culture, said Rabbi Tamara Cohen, chief of innovation at Moving Traditions, a not-for-profit that focuses on sexism in Jewish education. “If that’s being replicated in some way that there’s this connection between who is powerful is more desirable… I don’t think it’s setting people up for sticking with getting to know what they personally want and need out of a relationship.”

The rules are similar across youth groups, but slight differences appear to track the ideologies of the distinct organizations. At USY, which as part of the Conservative movement is opposed to intermarriage, you lose your “points” if you hook up with a non-Jew, as the Forward reported last month. There is no such penalty in the version played NFTY, which as part of the Reform movement takes a more conciliatory approach to intermarriage.

“They are speaking the language of the organization,” said Ari Y. Kelman, a professor in the Stanford Graduate School of Education focusing on education and Jewish studies. “The differences, slight as they might be, they are evidence that they are being socialized into the logics of the organization, even if they are sort of perversions of the values that the adults espouse.”

The game does not appear to have been part of the culture at the Modern Orthodox youth group NCSY.

Neither BBYO nor Young Judaea responded to requests for comment about the “points system.” USY’s leadership told the Forward last month that the game is currently “more of myth and legend than reality.”

The professional and youth leadership of NFTY told the Forward that they had recently taken direct aim at discouraging the “points system.”

A resolution against sexual violence among youth passed at NFTY’s annual meeting this past June called for, among other things, NFTY to commit itself to “working to eliminate systems or games that encourage objectification in a sexual context.”

“We don’t want some rumored underground game to dictate the way teens feel within their youth community,” said Rabbi Elizabeth Zeller, NFTY’s director of learning and innovation. Zeller said that she had not heard of the game being actively played during her two years at NFTY, but that the resolution served to lay down a marker about the organization’s position.

“It’s something we’ve heard has been rumored,” she said. “If it were to happen… people [would] have a really clear understanding of NFTY’s stance on it.”

Adam Friedman, a high school senior currently serving as NFTY’s social action vice president and one of the drafters of the resolution, said that he had heard rumors of the “points system,” but has never heard of students playing the game. He said that the sexual violence resolution was meant to broadly oppose rape culture.

Gabi Kirk, who was in BBYO from 2004 to 2008, said that at the time, the game was a part of a larger hookup culture within the organization. “You wanted more points, and there was prestige,” she said. “I just don’t think you really build up a strong culture of respect for people’s bodies in that way.”

At Young Judaea, the “points system” existed at least in the early 2000s. Sandy Fox, a doctoral candidate in American Jewish history, said that when she was active at that time, among the people she spent time with, it was a lighthearted game.

“People counted their points for fun,” Fox said. “I don’t think many people hooked up with people just for the points or strategized it.”

Kelman acknowledged that the “points system” in some respects seems to be an act of teenage satire. “I think there’s probably a sense of humor there, and a teenage subversion of the grown-up power structures,” he said. “[Teenagers] are really good at parodying dumb things they see grownups do.”

But even if there’s an element of parody, the game’s rules can appear to normalize risky or problematic behavior. Points systems at USY, Young Judea, and NFTY all awarded the highest possible number of points for hookups with staff members, according to alumni and social media posts. A former member of USY who asked not to be named said that the points for hooking up with staff members were seen as a joke. “I can understand it can be seen as a problematic joke,” the former member said.

But others acknowledged that the rule could normalize sexual relationships between staff and students. “If it exists in the point system, does it make it seem like a normal or even desirable thing to do?” asked Fox, the former Young Judaea member.

There are indications that the “points system” is perhaps less widespread today than it was in the early to mid-2000s. But it seems to continue to exist, somewhere between a rumor and a game, throughout the Jewish youth movement scene.

“The ranking system seems to me its about accumulating status,” said Cohen. “That’s not about clarifying my values, not about deciding who do I want to be intimate with based on what’s important to me. It’s about someone else’s idea about who I should be with based on their external status and power. And that’s dangerous.”