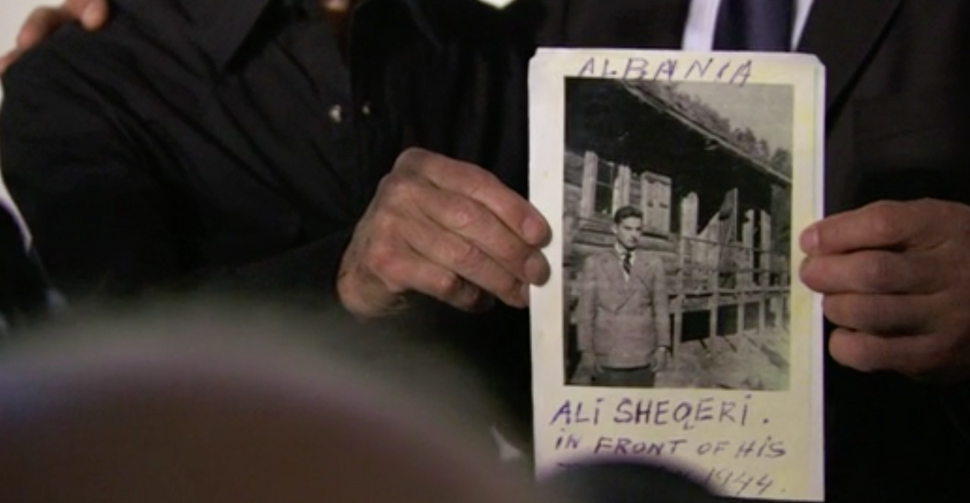 Image by Besa The Promise

TIRANA, Albania (JTA) — Most anywhere else in Nazi-occupied Europe, an encounter with police would have likely sealed the fate of Jewish refugees like Nissim and Sarah Aladjem and their 10-year-old son, Aron.

Instead, when the family was detained by police in the Muslim nation of Albania 75 years ago, it was the key to their survival.

The family was fleeing Bulgaria when they were detained by five police officers working for the occupation forces. Instead of turning them over to his occupiers, as he should have done with undocumented Jewish aliens, one of the policemen helped the Aladjems find shelter with other locals. 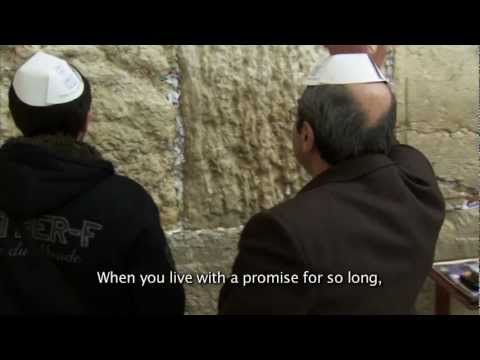 Far from unusual in Albania, the actions of that officer in 1943 — he has not been identified — attest to the prevalence and boldness of the efforts to rescue Jewish refugees in this nation situated northeast of Greece. It is perhaps the only Nazi-occupied country that had more Jews after the Holocaust than before.

Owing partly to what locals call Besa, a local code of honor and neighborly conduct, the rescue and survival of approximately 2,000 Jews by Albanians for decades had remained largely unknown. But thanks to recent studies and films, it is taking its place as a rare ray of light during otherwise dark times.

The Aladjems’ story is told in an award-winning 2012 documentary film titled “Besa: The Promise.” It tells the story of Rifat Hoxha, who ran the pastry shop to which the family was taken by the police officer and arranged their shelter.

The film follows the unlikely story of how, a decade ago, Hoxha’s son, Rexhep, returned three Jewish prayer books to members of the Aladjem family living in Israel. During the war, his Jewish guests had given the prayer books to Hoxha for safekeeping after hiding at his house for half a year.

As with many other Jews who survived in Albania — most of them refugees from neighboring Greece, Italy, Bulgaria and Serbia — the rescue of the Aladjems was “an open secret,” Rexhep Hoxha, a father of two who was born in 1950, told JTA. “Not only the police knew, but all the neighbors knew as well. There was a circle of silence. It’s something connected to our culture. You don’t betray your guest, and you certainly don’t betray your neighbor.”

To accommodate the Aladjems, Hoxha, who died in 1987, shuttered his bakery in the busiest time of the year — police brought the Jews to his shop just ahead of the Eid al-Fitr holiday – and brought them to his home, Aron Aladjem recalls in the film. Then he put them up in a room occupied by his in-laws, who temporarily moved out to make room for the guests.

“My grandfather was a Muslim cleric. For him to leave his house and make room for this Jewish family, there is no tolerance more beautiful than this,” Rexhep Hoxha said. Israel recognized his father posthumously in 2015 as a Righteous among the Nations – the Jewish state’s honorary title for non-Jews who risked their lives to save Jews during the Holocaust.

In many cases, numerous members of rescuers’ families knew of such acts and became involved, according to a 2008 essay by Yad Vashem researchers.

“This included the extended family and even some close friends,” the essay said. “Often the Jews were divided between relatives and friends.”

Some of the Jews in hiding – and especially the 200 Albania-born Jews who survived the war — were feeling secure enough to operate small businesses during the occupation years, according to the essay. Some never bothered to go into hiding, trusting their neighbors would not denounce them and warn them ahead of inspections.

Albania currently has 75 so-called righteous gentiles — a small number in absolute terms but one that, examined relatively, means that a Jew there was at least 10 times likelier to be rescued than in Lithuania, which has almost 900 righteous, or Poland, which has 6,706.

Last year, to mark International Holocaust Remembrance Day (which this year falls on Jan. 27), the Albanian Ministry of Foreign Affairs hosted a conference in Tirana titled “We Remember: Promoting human rights through the lens of Holocaust education and remembrance.”

Traces of the hospitality aspect of the Besa code are still visible today in rural Albania, an Adriatic republic whose green and black mountains are scarred by thousands of abandoned and elaborate Cold War-era bunkers and reservoirs built by its communist dictator, Enver Hoxha (no relation to Rifat).

“If I’m traveling for work and get stuck somewhere, I only need to knock on someone’s door and I have a place to sleep for the night,” said Petrit Zorba, a meteorologist and director of the Albania-Israel Friendship Society.

Drivers often signal to others with their lights to warn of speed traps in Tirana, a chaotic but clean city of 1 million where the sound of the call to prayer from the Et’hem Bey mosque is heard several times a day across the main Skanderbeg Square.

According to Zorba, the rescue of Jews in Albania was “a matter of tradition, and had very little to do with religion.” Yad Vashem has no insight into what role religion played in the rescue efforts. But Baba Mondi, the leader of the secretive Bektashi Shiite sect, which is headquartered in Albania, says that religion’s role in the rescue was both central and indirect.

“In Albania there is a tradition of religious tolerance,” Baba Mondi, wearing his traditional white-and-green robe and fez-like hat, told JTA in November. “I wouldn’t mind my children marrying a Jew, a Christian, whoever. So while the rescue maybe didn’t come from a religious commandment, it grew out of a religious environment where all fellow human beings are our brethren.”

He gave the interview at the world center of his sect — a magnificent domed structure with 12 arches that was inaugurated in the city’s eastern outskirts in 2015. Its ornate ceiling features arabesque designs and the traditional Bakteshi sun symbols arranged around an elevated turret. On sunny days, its golden dome reflects and amplifies light that it catches from the snowy top of Mount Dajti overlooking Tirana.

Forthcoming in speaking about the rescue of Jews, Baba Mondi declined to reveal anything of substance about the customs of his sect, which for centuries has been persecuted by other Muslims for its mystic interpretations of Islam.

In addition to Besa, the relatively benign nature of the German occupation may have also played a role in how Albanians were more willing to take in Jews than Poles, Ukrainians and others across occupied Europe.

“German authorities did not aggressively seek, deport or exterminate Jews from Albania proper after occupying the country in November 1943,” according to Daniel Perez, a historian who wrote about the Holocaust years in Albania in a 2013 book titled “Bringing the Dark Past to Light.”

But Aron Aladjem says he witnessed a different reality.

“The Germans ruled there and on every tree, every electrical pole we saw partisans hanging  — many of them hanged to scare people into not hiding partisans and Jews,” he recalls in the film.

The Germans, who replaced the Italians in 1943 as the occupying force in Albania, were not the only ones that Hoxha had to watch out for, according to his son.

“Having a religious book, Jewish or Muslim, was not a good idea for our family, which already had a cleric, under communism,” Rexhep Hoxha said. “Any connection to Jews or Israel, whom we were told was an enemy of socialism, was ill-advised.”

The culture of silence under communism partly explains why the rescue of Albanian Jews has remained relatively unknown for many decades, according to the Yad Vashem researchers. The imprint of the communist era, they wrote, caused “people to fear being linked to the ‘wrong’ resistance group, even after the regime had been changed.”

And Albanians had some very wrong resistance groups. Most notably, the 1st Albanian Waffen SS Division, manned by hundreds of ethnic Albanians — many of them from Bosnia and also Kosovo, which during the German and Italian occupations had been lumped together with Albania. The details of their activities are sketchy, but they are known to have rounded up Jews who belonged to the group of at least 249 Kosovar Jews who ended up at the Bergen-Belsen concentration camp in Germany, according to Perez.

But according to some historians, many Jews who were rounded up by Albanian collaborators were transferred to minimum-security camps in Albania proper, where the vast majority were kept alive in defiance of Germany’s orders and policy on Jews.

Due to these complications and communist-era censorship, the first written account of the rescue story was published relatively late, in 1992, after the fall of communism.

One of the first stories to emerge in documented form was of Beqir Qoqja, a Muslim tailor who in 1943 took in his friend, a Jew by the name of Avram Eliasaf Gani from the city of Vlore, after the Germans had arrested Gani’s brother.

Qoqja, who was recognized as a Righteous Among the Nations in 1992 and died in 2005, hosted Gani at great risk at his Tirana home, where Qoqja was living with his wife, Naile, and at least one daughter, according to Qoqja’s son Fatos.

“A Jewish filmmaker once told me that if he were asked to risk his own child’s life to save another man’s, he wouldn’t do it,” said Fatos, 67, who has two children. “But I’d do exactly as my father had done. It’s Besa.”

The early 1990s were also the time when European societies became aware of the dark side of the Albanian code of honor: the slaying of men, including innocents, in blood feuds and honor killings that are dictated by the code of Kanun. They have cost thousands of lives and sent many thousands into exile as asylum seekers.

Despite the cruelties of the Kanun system, however, ordinary Albanians found the Nazi violence against Jews unconscionable because it targeted women and children, according to Eliezer Papo, a scholar on Balkan Jewish history at Ben-Gurion University of the Negev in Israel.

“Common humanness, rolled into the Albanian patriarchal, tribal ethos, compelled these people to rescue Jews,” Papo suggested. And whereas “men killing other men is part of life in Albanian tradition, the targeting of women is an unspeakable monstrosity.”

He noted that killing dozens of men from one family to avenge the slaying of just one member of a feuding clan is not unheard of in Albania.

“But those same feuding families,” Papo said, “would risk everything to rescue one another’s daughters.”