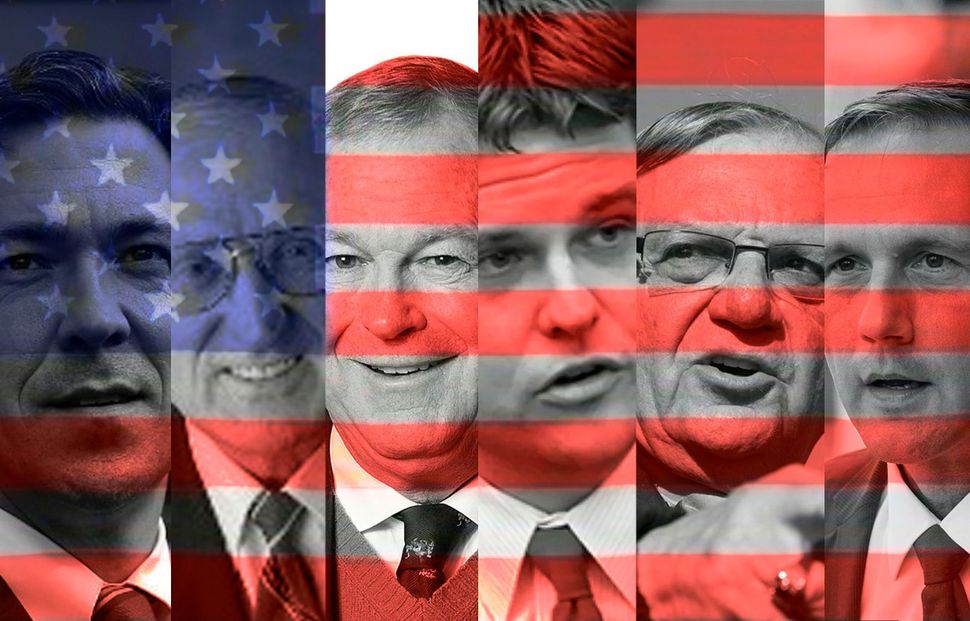 Arthur Jones is not a winner. True, he clinched the Republican nomination in his Illinois congressional district. That happened because he ran unopposed. The district is so heavily Democratic that no legitimate Republican even cares to run. The 70-year-old is a Holocaust denier who calls the Nazi genocide “an international extortion racket.”

“His depraved values are not Republican values,” said former senator Norm Coleman, national chair of the Republican Jewish Coalition, in response to Jones remaining the only candidate in the Republican primary for the seat.

Still, snagging that nomination put him in the most high-profile position a neo-Nazi has reached in American politics in decades. What’s more, Jones is not alone. Organizations monitoring hate groups and extremists identified several candidates running for national positions in the 2018 midterms who are either tainted with anti-Semitism or have associated themselves with white supremacists. These men probably won’t win their elections. But they are gaining power in another way: They are making Jew hatred and white supremacy more normal.

“When someone invites a Holocaust denier, or sits down with a white supremacists, that gives them legitimacy,” said Oren Segal, director of the Anti-Defamation League’s center on extremism notes. “They use this position to mainstream their hate.”

White supremacists and candidates holding anti-Semitic views are nothing new to American politics. Famous examples include Ku Klux Klan leader David Duke, who ran for office several times, and Pat Buchanan, who ran for president. Today, however, there is more grassroots acceptance of racist views, and that’s inspiring more candidates, Segal said: “We’re seeing more white supremacists activity on the ground in recent years, and now some of them are willing to build on it in order to get elected.”

None of the politicians embracing an extremist agenda or associating themselves with people who do so have explicitly endorsed or accepted any call for violence. Nonetheless, 2017 saw a spike in white supremacist assaults. A recent report finds that the number of hate-related murders committed by white supremacists more than doubled in the past year. Other data shows an increase in violent anti-Semitic and racist incidents in comparison with the previous year. 2018 started with the horrific murder of Blaze Bernstein, a Jewish student, by a member of the Atomwaffen Division, a Nazi group where the members are responsible for killing five people in recent months.

ADL, as well as the Southern Poverty Law Center, has been looking at several Republican politicians running in 2018 who have expressed sympathy to extreme views. The Republican establishment and most Republican donors and supporters have distanced themselves from these candidates.

Like Jones, Paul Nehlen is a congressional candidate who has used anti-Semitic language in his tweets and public comments. He’s running in Wisconsin, in the district represented by House Speaker Paul Ryan, and in his open embrace of the “alt-right” he has compiled a list of his Jewish foes. Jewish activists and Republicans denounced him, as well as Steve Bannon and Breitbart News.

Florida Rep. Matt Gaetz and California Rep. Dana Rohrabacher don’t give voice to Jew hatred in the way Nehlen does, but they have given their imprimateur to Holocaust denier Chuck Johnson. Gaetz gave Johnson a ticket to the State of the Union speech, while Rohrabacher invited him to a Capitol Hill meeting. Gaetz stressed that he does not support Johnson’s views and was not aware of them when he provided him the ticket to the event. “He was a perfectly polite guest,” Gaetz said later. Rohrabacher also sided with Johnson, who argues he is not a Holocaust denier, and claims that his comments on the issue were misrepresented.

Politicians tend to plead ignorance in these situations, recent history shows. Sheriff Joe Arpaio, who was pardoned by President Trump last year and is now running in the Republican Senate primaries, said he didn’t know a publication he’s given interviews to has described the Holocaust as a hoax and claimed Jews were behind the September 11 attacks. However, the local press had contacted his office about one of those interviews in 2014. Mississippi state Senator Chris McDaniel appeared recently on a radio show hosted by a conspiracy theorist who supports the notion that the “World Zionist Organization” was responsible for the 9/11 terror attacks. McDaniel said he had “no idea what positions” the show’s host holds. And in Montana, Rep. Greg Gianforte donated to the statehouse candidacy of Taylor Rose, a person SPLC described as having a “long history of deep involvement with the white nationalist movement.” Gianforte argued he was “unaware of some of his views” and supported him simply because he was a Republican candidate.

Jewish Democrats have called out their fellow Republicans, demanding they “end the silence, stand up to hatred and condemn” Nehlen. The Republican Jewish Coalition responded, making clear that “of course we condemn him, in the strongest terms.”

At the same time, Jewish Republicans echoed an idea that has been circulating ever since Nehlen began to make waves on the national stage: Is a marginal figure like Nehlen worthy of national attention? “We also balance that against not wanting to give anti-Semites the attention they so obviously crave,” RJC wrote. The Jewish Republican group also noted that Nehlen’s rival, Paul Ryan, is speaking at their conference later on this month: “if you couldn’t figure out who we’re supporting in #WI1,” they noted in a twitter war with Jewish Democrats over the candidates in Wisconsin’s 1st congressional district, “you’re just living under a rock.”