This Jewish Couple Overcame Infertility. Do Their Twins Have To Convert? 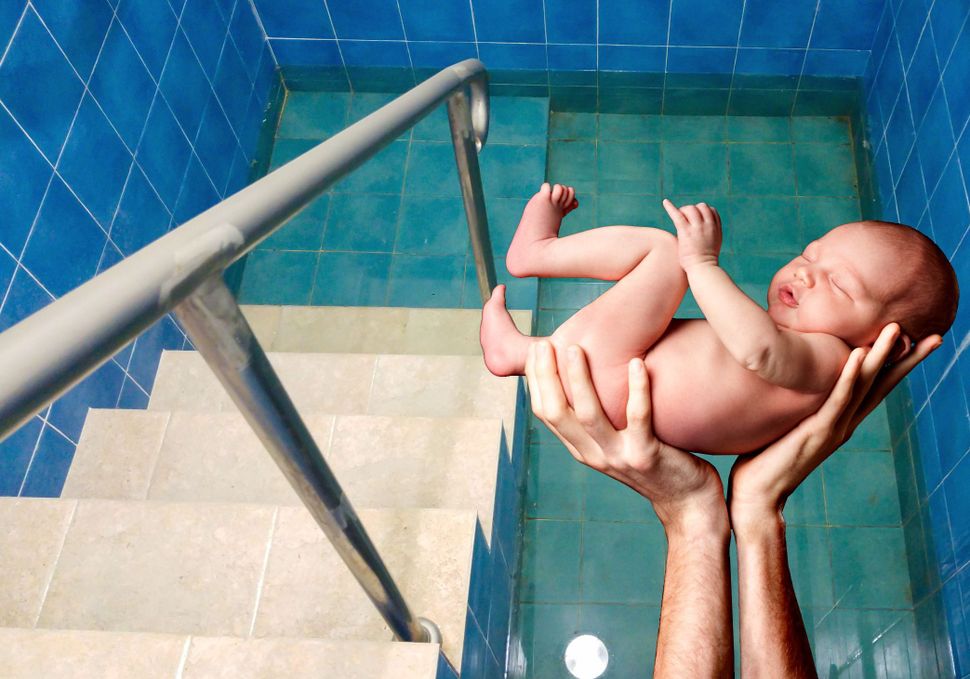 The Jewish parents of infant twin boys drove last summer from their home in the Washington, D.C., area to a summer camp in Pennsylvania to perform a conversion for their babies. It was a slightly embellished version of the traditional conversion ceremony: Since both boys were already circumcised, they simply recited a prayer, the Sh’ma, and committed to raising the children as observant Jews before briefly submerging them in the camp’s mikveh, or ritual bath.

The ceremony was unusual for one big reason: Both of the legal parents have Jewish parents and were raised in the faith.

But their children were conceived using an egg from another woman and with a gestational substitute, or surrogate, to carry the babies. Neither of the other women is Jewish.

“Given that the most traditional Jews think that the mother needs to be Jewish, I didn’t feel comfortable with just my husband being the Jewish parent,” said the mother, Lynn, who asked to be referred to by her middle name to protect her children’s identities.

The Torah is clear on the importance of having children — “be fruitful and multiply” is the first commandment mentioned. But even as Jews, who tend to marry later, have increasingly turned to technology to help them have babies, Jewish law on the question of what determines the Jewishness of those babies is complicated. It can lead to uncertainty, especially in the Orthodox world, which has left many parents of children born with the help of donor eggs or surrogates feeling anxious. They worry that their child may not be considered Jewish enough even by their own movement — or that if they choose a different Jewish tradition as adults, they’ll be rejected later.

“We don’t know how they’re going to choose to live their lives Jewishly when they get older,” Lynn said. “I wanted to give my children the broadest range of options for them to make their own choices.”

In the United States, one in three couples in which the prospective mother is over 35 will use treatments for infertility. Jewish women increasingly give birth later in life, and the Jewish Fertility Foundation recently calculated that one in six Jewish women will require some kind of fertility treatment.

That can mean anything from a relatively inexpensive round of hormone shots to in-vitro fertilization, which costs $12,000 on average. For couples in which the mother has poor quality eggs or has entered menopause early, donor eggs and sometimes surrogates may be necessary, jacking up the price to between $20,000 and $100,000.

Once they have overcome the physical and financial obstacles to parenthood, these families might well face an additional, religious hurdle before they can feel sure that they will be raising a Jewish child. Which community they belong to, and the legal opinion of their rabbi, can determine if they must formally convert the baby.

“The Jewish world is such a complicated place and is changing so rapidly that unfortunately there are a lot of different scenarios where a person’s Jewish identity will be called into question,” said Carrie Bornstein, executive director of Mayyim Hayyim, a mikveh and education center outside Boston where hundreds of infants have been converted from all streams of Judaism.

The main source of confusion is that Orthodox rabbis and the Conservative movement hold opposing views on whether children born with the help of reproductive technology are Jewish.

The Conservative movement pinned down its stance on gestational surrogates over 20 years ago. In a paper approved by the movement’s Committee on Jewish Laws and Standards in 1994, Rabbi Elliott Dorff wrote the official opinion, now shared by most Modern Orthodox rabbis: “a child born to a Jewish woman is Jewish, regardless of the religious status of the ovum donor.” (The Reform movement has largely side-stepped the issue — it officially recognized patrilineal descent in 1983 — and generally considers anyone raised as a Jew to be Jewish.)

But opinion in the Orthodox world began to shift in the 2000s, especially in Israel, toward favoring the Jewish identity of the genetic mother. In 2010, Dr. Mordechai Halperin, who is chief officer of medical ethics at Israel’s Ministry of Health and is also an Orthodox rabbi, announced a sea change in rabbinical opinion. At a conference on fertility, he noted that most Orthodox rabbis now held that the genetic mother would determine Jewishness. Some rabbis declared that the opinion was based on the “racist” idea of Jews having “Jewish blood”; Dorff agreed that such a view was “racist.”

“It creates a level of fear in people,” Bornstein said of the vagueness of Jewish law on the subject of surrogacy. “It’s good that they should know what they might encounter in the future, but there’s also a level of fear that’s exacerbated when they’re thinking about the what-ifs.” 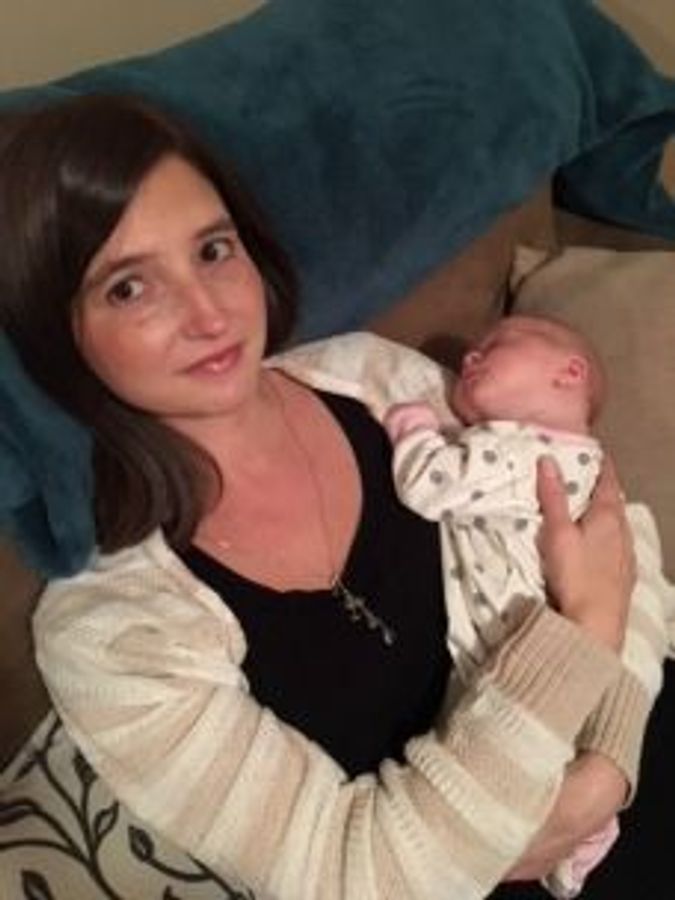 A picture of Bornstein with the baby she carried for an Orthodox couple from London. Image by Carrie Bornstein

Bornstein played a particularly intimate role in assuaging one couple’s fear — by being their surrogate. In January 2017, Bornstein became pregnant with the child of a couple based in London. Vivianne and David — as Bornstein referred to the parents in her blog about the experience — felt that they needed a Jewish surrogate to confirm beyond any doubt their child’s Jewish status. Vivianne and David are Orthodox, and they worried that one rabbi’s personal interpretation of Jewish birth law could lead to their stigmatization.

Dorff explained what can happen when the stakes can be that high: “People might want to make doubly sure that according to anybody’s criteria, ‘My child is a Jew.’”

But in some cases, even a formal conversion can’t save a Jewish child from further scrutiny.

Idit Solomon, director of Hasidah, a not-for-profit organization that provides grants to Jewish couples for IVF treatment, said she knew of children who had been converted as infants and had their identities questioned later on by their own movement.

One woman, whom Solomon met while doing outreach for Hasidah and wished to remain anonymous, was asked by her rabbi to perform a confirmation ceremony for her twin children at their joint b’nai mitzvah. The rabbi said the ceremony was meant to ensure that the children were ready to go through with the b’nai mitzvah process. The children had been born with the woman’s eggs but through a non-Jewish surrogate, and had undergone a conversion as infants.

“While its not necessarily a formal conversion per se, what was extremely painful for her was the idea that she would have to go through this all over again,” Solomon said. “It opened a wound, where she felt like, these are my kids, and they are Jewish.”

For Lynn, who performed a ritual conversion for her twin boys, the mikveh ceremony helped close her own wound: the worry that even one part of the Orthodox community could reject her children in the future. Even so, she and her husband still feel they did it to satisfy someone else’s idea of what being Jewish means.

“We were going to raise these children exactly the same way, regardless of the circumstances of their birth,” she said. “Having to do this ceremony and worry about what other people felt was challenging for us.”

“If it was up to us,” she added, “we might have made a different choice.”

This Jewish Couple Overcame Infertility. Do Their Twins Have To Convert?