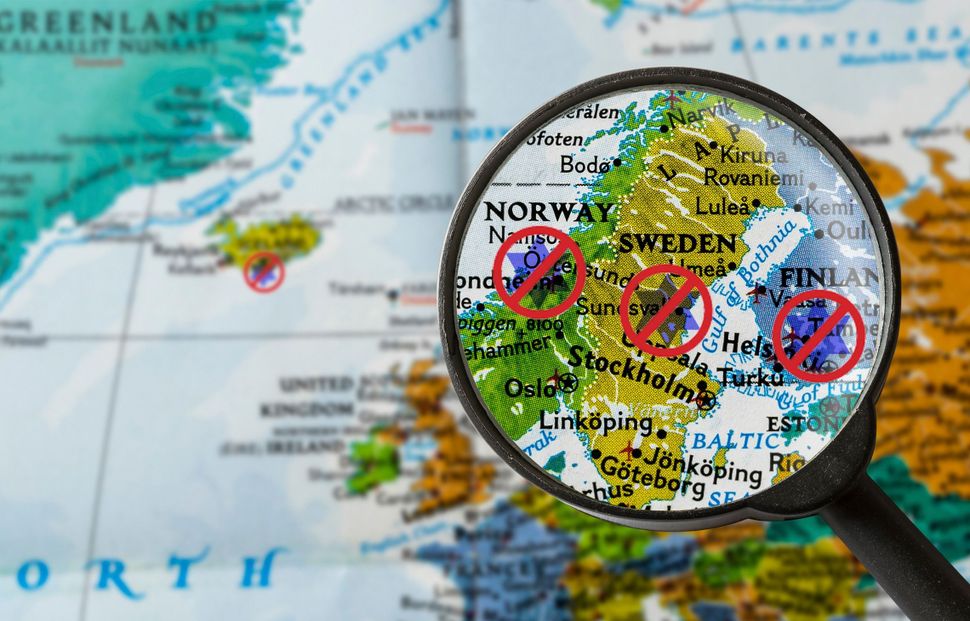 Scandinavia is the darling of liberals the world over. Yet for Jews living in there, life isn’t all free health care and minimalist design.

In Iceland, the tiny Jewish population is now facing the most serious legal challenge to male circumcision in Europe. A new bill that criminalizes circumcision of minors and penalizes parents and practitioners who perform the rite is gaining political backing and could turn into law.

The same progressive values that make the region a global role model are inspiring lawmakers across the north to take aim at key ritual practices for the Jewish community — circumcision and kosher slaughter. These legal efforts might make Jewish life more difficult — or even unviable — in this part of the world, and could similarly affect Muslims, who also circumcise and use religiously specified methods to kill animals for meat. Indeed, anti-Muslim and anti-Israel sentiment is on the rise in much of Europe, but such feelings account for only a fraction of the support behind these laws.

“It’s not carried by anti-Semitism,” said Lars Dencik, a professor of social psychology at Roskilde University, in Denmark. “But what we see, especially in Sweden, which pretends to be the world’s humanistic superpower, is that they really don’t get it.”

Scandinavians perceive animal rights and children’s autonomy as more important than religious freedom, according to Ira Forman, who served as special envoy to monitor and combat anti-Semitism in the Obama administration and was in charge of dealing with these Scandinavian restrictions on behalf of the U.S. government.

“This is the biggest threat to Jewish life in Scandinavia,” said Yair Melchior, chief rabbi of Denmark, another Nordic country facing challenges to the right of Jews to perform circumcision. “It raises questions for us: ‘Does it mean we’re not wanted? Do we have a future here?’”

All five Nordic countries disdain the practice of circumcision, whether Jewish or Muslim, and in 2013 they issued a joint statement calling for a ban on nonmedical male circumcision for minors.

Iceland is now taking this recommendation to the next level. The bill introduced by Silja Dögg Gunnarsdóttir of the Progressive Party already has nearly half the members of the Icelandic legislative body signed on. It would outlaw male circumcision on those under the age of 18, describing the practice as a parallel to the prohibition on female genital mutilation, which was outlawed more than a decade ago.

Danish activists initiated the bill in their country and introduced it in Iceland, where it was endorsed by hundreds of Icelandic physicians who argued that the risks of nonmedical male circumcision outweigh its benefits. 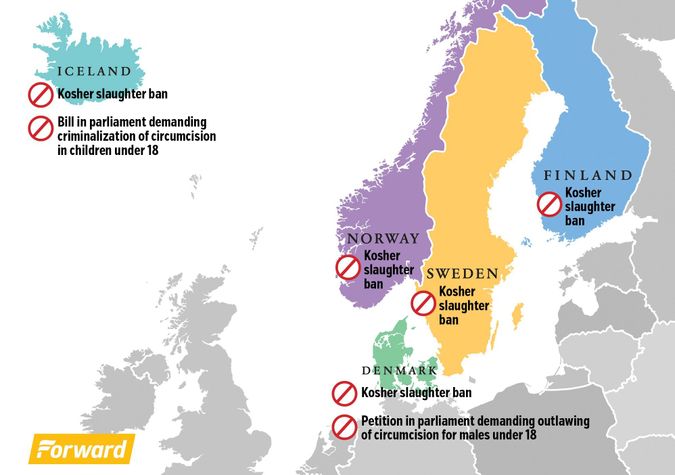 Iceland, with a population of 330,000, is home to, as estimated, no more then several dozen Jews with no synagogue, no rabbi and no organized institutions. This, however, will change in May, when Avi Feldman, a 27-year-old Chabad rabbi from New York, will relocate with his family to Reykjavik and open the country’s first Chabad House. Feldman visited the island during Hanukkah and says he found a community eager for more Jewish involvement.

“That led to our decision to rededicate our lives to the Jewish community of Iceland,” he told the Forward. Feldman knows he’ll be moving to the peaceful country in the midst of the most consequential circumcision debate Europe has seen. “This is a matter of concern,” he said. “We’re looking forward to bringing the knowledge of the importance of brit milah to the Icelandic people and lawmakers.”

“Throughout history, more than one oppressive regime has tried to suppress our people and eradicate Judaism by prohibiting our religious practices,” heads of the Jewish communities in four Scandinavian countries wrote in their letter. The leaders, from Sweden, Norway, Finland and Denmark, warned that the ban “will be an effective deterrent and will guarantee that no Jewish community will be established.”

It is, after all, not ideal to schlep an 8-day-old baby thousands of miles south for a surgical procedure.

Denmark may be next in line to take similar action. A petition demanding that male circumcision on those under 18 years of age be outlawed is gaining force, and if it reaches 50,000 signatures, the parliament will be forced to vote on the proposal. Denmark, as opposed to Iceland, has a more sizable Jewish population estimated at more than 6,000 members. The measure would also affect tens of thousands of Muslims.

“It’s very hard to win this public debate,” Melchior said. “When one side shows pictures of innocent babies and the other side needs to explain why circumcision should be allowed, the other side loses.” That is why the local community is focusing on lobbying lawmakers who may be more attentive to arguments refuting the claims about medical risks and babies’ suffering.

While the battle over circumcision is reaching its peak, the struggle to allow traditional Jewish slaughter in many of these countries has already been lost.

In some countries, such as Sweden, Finland and Norway, the ban on traditional Jewish slaughter dates back to the 1930s and is based on the rule that slaughtering the animal before it is stunned, as Jewish law requires, amounts to animal cruelty. Denmark passed similar rules in 2014. All countries have imported kosher meat widely available.

A new study, published recently by Institute for Jewish Policy Research, in London, found that discussions about imposing bans on Jewish slaughter and circumcision were most noticeable in Sweden, where 85% of respondents in a survey said they had personally heard non-Jews suggest imposing these bans in the past year. Dencik, a co-author of the study, said that a majority of Jews surveyed regard these moves as acts that make their lives more difficult. He noted, however, the differences between Sweden and Denmark. The Swedish Jewish community is more secular and is made up of many Eastern European immigrants who grew up with little connection to religion, and therefore feel less affected by the restrictions. Denmark has a more religious Jewish community that views limitations on circumcision and kosher slaughtering in a more personal way.

The United States government has raised these issues with Nordic countries throughout the years, stressing that it views the right to perform ritual circumcision and slaughtering as an issue of religious freedom that America expects all its allies to respect. In these conversations, the United States stressed mainly the issue of circumcision, viewing that it is critical for the existence of Jewish life in these countries, while bans on kosher slaughtering can be bypassed by imports of food products. “I made the case that if you’re serious about keeping your Jewish community, you can’t do this. You’re threatening the viability of the Jewish community,” Forman said of his engagement with these countries while serving as special envoy on anti-Semitism.

Most of the anti-immigrant activists behind these efforts don’t even know that Jews also do circumcision, Dencik said. They wish to make Muslim life in their countries more difficult.

These moves, however, have so far only driven the local Jewish and Muslim communities closer. Last July, leaders of both faith groups gathered to discuss the problem and to protest legislative moves banning slaughter and circumcision.

Melchior also that while there are anti-Semitic forces that tagged on to the movement, they do not play a leading role and their ideology does not drive the anti-circumcision campaign.

“This battle is being led by people who truly believe they are the heroes of liberalism and defenders of children’s rights,” he said.