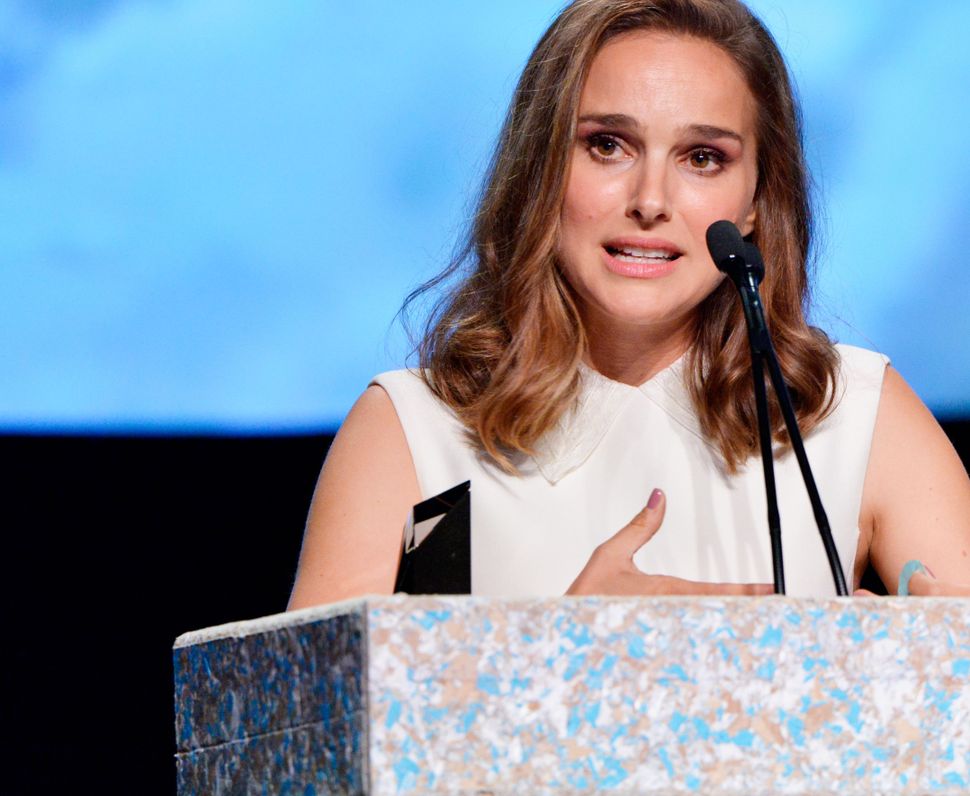 Oscar-winning actress Natalie Portman has refused to travel for Israel to accept a $2 million award, citing her “Jewish values” as an imperative to stand up for justice amid an increasingly deadly conflict with the Palestinians.

The Hollywood superstar said she did not want to be seen as endorsing Prime Minister Benjamin Netanyahu, whom she accused of carrying out a wide variety of misdeeds.

“The mistreatment of those suffering from today’s atrocities is simply not in line with my Jewish values,” she said in a statement late Friday, just before the start of the Jewish sabbath. “Because I care about Israel, I must stand up against violence, corruption, inequality, and abuse of power.”

She insisted that she still supports Israel and does not back a boycott of the Jewish state.

“I am not part of the BDS movement and do not endorse it,” she said. “Like many Israelis and Jews around the world, I can be critical of the leadership in Israel without wanting to boycott the entire nation.”

The Genesis Prize had earlier announced it was canceling its June prize ceremony for Portman saying it was “saddened” at her decision, which it said could “politicize” the award, which has previously gone to Michael Bloomberg, Itzhak Perlman and Michael Douglas.

The Israeli government wasted no time in lashing out at Portman, accusing the Jerusalem-born actress of betraying the Jewish state.

Culture minister Miri Regev slammed the “Black Swan” star for falling “like ripe fruit into the hands of BDS supporters.”

“Natalie, a Jewish actress who was born in Israel, joins those who relate to the story of the success and the wondrous rebirth of Israel as a story of darkness,” Regev said.

A leading lawmaker from the ruling Likud Party called for her citizenship to be revoked.

Oren Hazan labeled her “an Israeli Jewess who … makes cynical use of her origins in order to advance her career.”

But others urged Israel to take note that it is pushing away supporters with its outspoken rejection of criticism — and by its increasingly hardline stance towards the Palestinians.

Rachel Azaria of the centrist Kulanu Party called Portman a Jewy canary in the coal mine who reflects the increasing antipathy of younger Jews in the Diaspora.

“Natalie Portman’s cancellation should be a warning sign,” she tweeted. “She’s totally one of us, identifies with her Jewishness and Israeliness. She’s expressing the voices of many in US Jewry, and particularly those of the younger generation.”

Natalie Portman, who directed and starred in a film about Amos Oz, who said she was proud of her heritage, now won’t visit #Israel. https://t.co/nrSQPVDV9a Something is shifting.

The move caps a shocking week for friends and foes of Israel alike. Just Wednesday, students at heavily Jewish Barnard College voted overwhelmingly for a measure calling for divestment from Israel.

The actress, who was born in Jerusalem and moved to the United States as a toddler, still expects to receive the $2 million prize, which she has said will be donated to Israeli and international women’s charities.

Portman did not specify which events caused her distress but it seemed clear she was pointing to the deadly upsurge in violence against Palestinian protesters along the border with Gaza.

More than 30 Palestinians have been killed in recent weeks and hundreds wounded as Israel’s military has used live fire to keep demonstrators away from a self-proclaimed buffer zone along the desert border.

Israel celebrated the 70th anniversary of it independence on Thursday, a day that Palestinians consider a day of mourning.

In November, the Genesis Prize, which is sometimes called a “Jewish Nobel prize,” announced that Portman would receive its 2018 award, which comes with cash prize that recipients may direct toward causes of their choice.

Genesis said in December Portman’s prize money had been doubled to $2 million by a donation by Israeli philanthropist Morris Kahn. The foundation did not indicate whether Portman would still receive the prize money in light of her announcement.

The Genesis Prize, which now says it will decide which groups get Portman’s prize, was established by Mikhail Fridman and other wealthy Russian-Jewish businessmen and operates in a partnership with Israel’s Prime Minister’s Office and the Jewish Agency for Israel.

It’s not the first time Portman has voiced criticism of her homeland’s policies.

Portman joined other Hollywood stars in 2009 in protesting calls for a boycott against the Toronto International Film Festival for its staging of a Tel Aviv-themed event.

In 2015, following the re-election of Israeli Prime Minister Benjamin Netanyahu, she said she was “very, very upset and disappointed.”

“I find his racist comments horrific,” she told The Hollywood Reporter. “However, I don’t — what I want to make sure is, I don’t want to use my platform [the wrong way]. I feel like there’s some people who become prominent, and then it’s out in the foreign press. You know, shit on Israel. I do not. I don’t want to do that.”—With Reuters, Haaretz and JTA