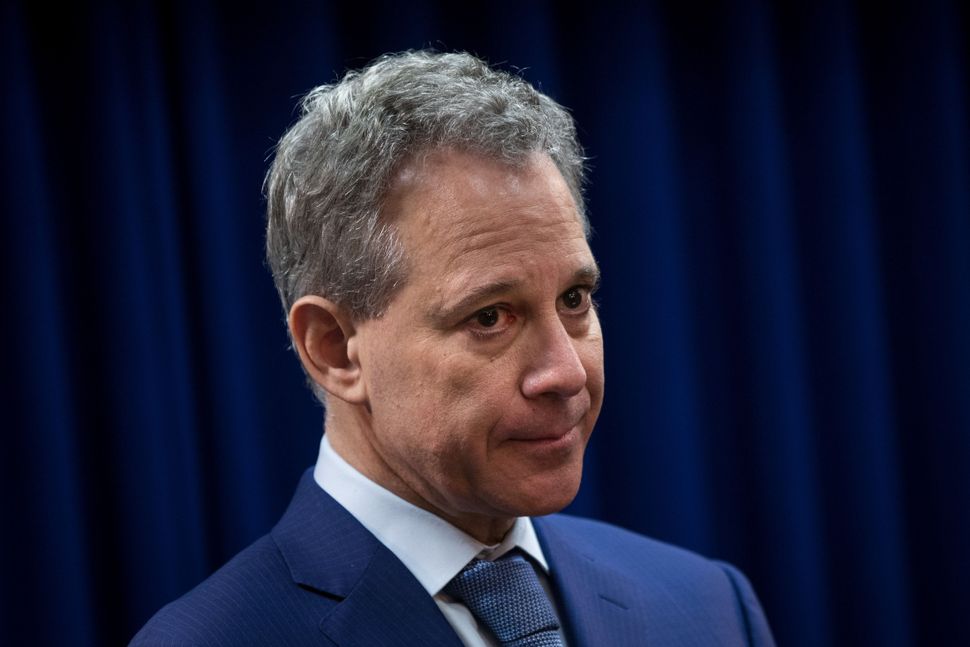 Eric Schneiderman is no longer the New York Attorney General, but rather, a meditation teacher Image by Getty Images

As claims of physical and emotional abuse quickly consumed Eric Schneiderman’s promising political career, longtime allies struggled in vain to reconcile the lurid reports with the principled and progressive leader they thought they knew.

The liberal stalwart resigned as New York’s attorney general on Monday night, less than four hours after the New Yorker published a bombshell report in which four separate women accused him of a pattern of frightening abuse.

“I really feel a mix of rage and grief and disorientation,” said Brad Lander, a member of the New York City Council who has known Schneiderman since the 1990s and considered him a political mentor. “I’m just so angry and appalled.”

One person who had spoken with members of the tight Upper West Side political clique where Schneiderman made his bones said that it was “like a bomb went off in that world.”

Schneiderman, a cerebral attorney who has spent three decades in New York politics, was until Tuesday a leading light of a generation of Upper West Side Jewish progressive politicians. A protege of Rep. Jerry Nadler, Schneiderman emerged after the election of President Trump as a leading national opponent of the president’s policies.

“I think it’s a tragedy,” said Ruth Messinger, a former Manhattan borough president and former president of the American Jewish World Service who has known Schneiderman for decades. “A tragedy for [the victims], and … for politics. He presented over many, many ears as an intelligent, thoughtful, committed, progressive elected official.”

The New Yorker article quotes two different women by name who say Schneiderman hit and choked them when they were in romantic relationships with him. Both of the women also said that Schneiderman made threats using his political and legal power to keep them silent.

In a statement Tuesday, Schneiderman denied the allegations of assault, but said it was best that he leave his post.

After enduring explosive sex scandals involving Eliot Spitzer and Anthony Wiener, New York’s political elite should have been inured to such explosive revelations — and the humbling of a powerful rising star.

But people who have known Schneiderman for decades said they were honestly taken aback by the news and had absolutely no indication either of the abusive behavior or the heavy alcohol use described in the New Yorker article.

“I can’t tell you how shocked I was by these reports,” said Mark Levine, another member of the New York City Council, who has known Schneiderman for 20 years. “There was nothing in his public persona to indicate this kind of sadistic behavior. And like a lot of people, I’m rewinding the tape and thinking through the years and wondering whether there were signs.”

Schneiderman’s personal life has long been something of an enigma, and something he speaks little about in public. At times early in his tenure as attorney general, he seemed uneasy with his growing public profile. Unlike the prototypical glad-handing politician, he gives the sense of being a bit uncomfortable in his own skin.

“I really in many ways am a very private person, so it’s sort of funny to be — it’s a little odd to become more and more well known,” he told the Forward in 2012.

Schnederman’s ex-wife, powerful New York lobbyist Jennifer Cunningham, remains a close advisor. In a statement on Tuesday, she said that she found it “impossible to believe these allegations are true.”

Even among Nadler’s prominent acolytes, Schneiderman was a leader. “He was like the wise man in a room,” Stringer said of Schneiderman in a 2012 interview with the Forward. “He was always the person you called with that questions.”

After the publication of the New Yorker story on Monday, Schneiderman’s longtime Upper West Side political allies each issued their own pained denunciations, one after another.

“I think he has done the right thing for himself, his family, and the people of New York,” Nadler said in a statement on Monday night.

“I stand with the women who came forward,” Stringer said in his own statement.

“It’s so devastating on so many levels because he did great things in office, as a state senator, as attorney general,” Rosenthal told the New York Times.

Along with the shock and disgust about the allegations in general, associates were most disturbed that Schneiderman staked out vocal positions as a feminist and an advocate for sexual abuse victims, even while allegedly carrying out such abuse himself.

“Perhaps his intense activism on women’s issues may have been a deliberate attempt to cover up this behavior,” Levine suggested.

The reports that he called one ex-girlfriend who is of south Asian descent his “brown slave” and demanded that she call him “master” was equally disturbing to colleagues who had counted Schneiderman as an ally in the fight for racial justice.

The jolting day left many who had known and trusted Schneiderman asking weighty questions about the place of men in progressive politics.

“It’s hard to figure out what’s wrong with elected men that this is a pattern. And also what is wrong with us collectively, or with our democracy that we keep electing them,” Lander said. “And I don’t have answers to those questions.”