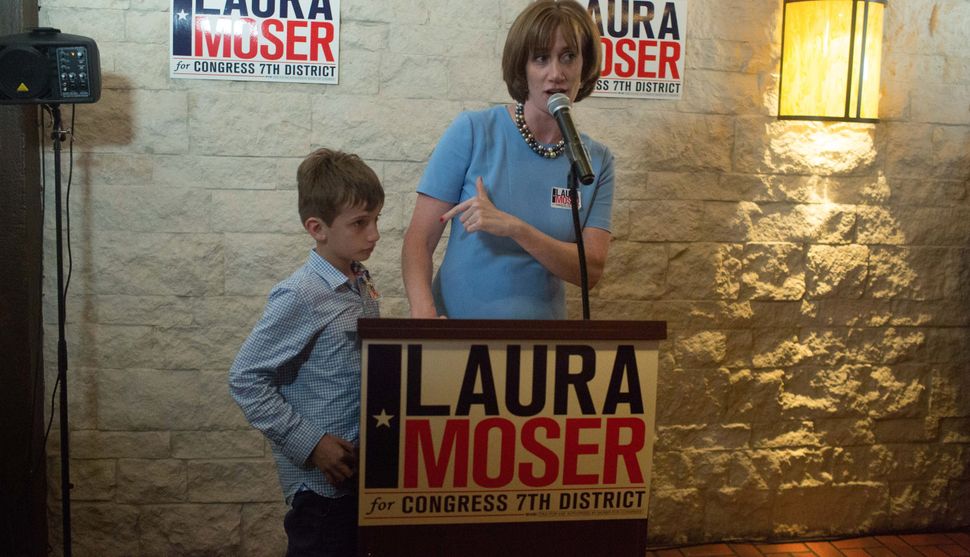 Laura Moser hopes to ride a wave of progressive voters to victory in a suburban Houston congressional district Tuesday, while her opponent is making outreach to disaffected moderates her main calling card.

The down-to-the-wire primary race between Moser and attorney Lizzie Pannill Fletcher is one of several high-stakes primary battles that between those who want Democrats to tack left or to the middle as they push to retake Congress in November.

Even as the Democratic establishment promotes more centrist candidates, insurgents are trying to tap anti-Trump energy that is the flip side of the right-wing fervor driving races on the GOP side.

“These primaries (will help tell) whether Democratic voters will prove to be as anti-establishment as Republican primary voters have become,” said Kyle Kondit of Sabato’s Crystal Ball at the University of Virginia’s Center for Politics. “That hasn’t necessarily happened so far.”

Analysts rate it a tossup in November, and Democrats have been eyeing it since Trump lost the district in 2016. Democrats need to win 24 seats to retake control of the House of Representatives, and many of their targets are in similar suburban well-educated areas.

Moser, who is Jewish, has been endorsed by the Bernie Sanders-aligned group Our Revolution. In an unusual twist, the Democratic Congressional Campaign Committee publicly released opposition research on Moser in February, including a reference to a 2014 magazine piece in which the candidate said she would rather have a tooth pulled without anesthesia than move back in with her grandparents in Paris, Texas.

Moser has publicly prioritized outreach to infrequent progressive and minority voters as the path to victory, while Pannill Fletcher emphasizes connecting with disaffected moderate Republicans.

The district is much more Jewish than the national average, with more than 20,000 living in the area — a little more than three percent of the total population.

In Georgia, both parties have key primary races in the race for governor.

On the Democratic side, former state House of Representatives Minority Leader Stacey Abrams is facing off against a member of the state House, Stacey Evans. Like the race in Texas, Abrams is seen as seeking new votes on the left with Evans looking toward the center.

Abrams countered in her own piece that she rejected “the demonization and de-legitimization of Israel represented by the BDS narrative and campaign.”

But she defended a vote against a bill that would bar state funds to contractors who refused to pledge they would not boycott Israel or its settlements, arguing it could stifle other legitimate boycotts.

On the other side of the aisle, Lt. Gov. Casey Cagle sits atop the polls in a crowded Republican race and is hoping to get at least 50 percent of the primary vote to avoid a runoff.

Local CBS anchor Bobby Kaple enjoys some local name recognition. He lists healthcare as his top issue and says he wants to “end the dysfunction in Washington,” according to his website.

Businessman Kevin Abel is also running on healthcare and attracting more tech-sector jobs, which was a big issue for Ossoff as well.