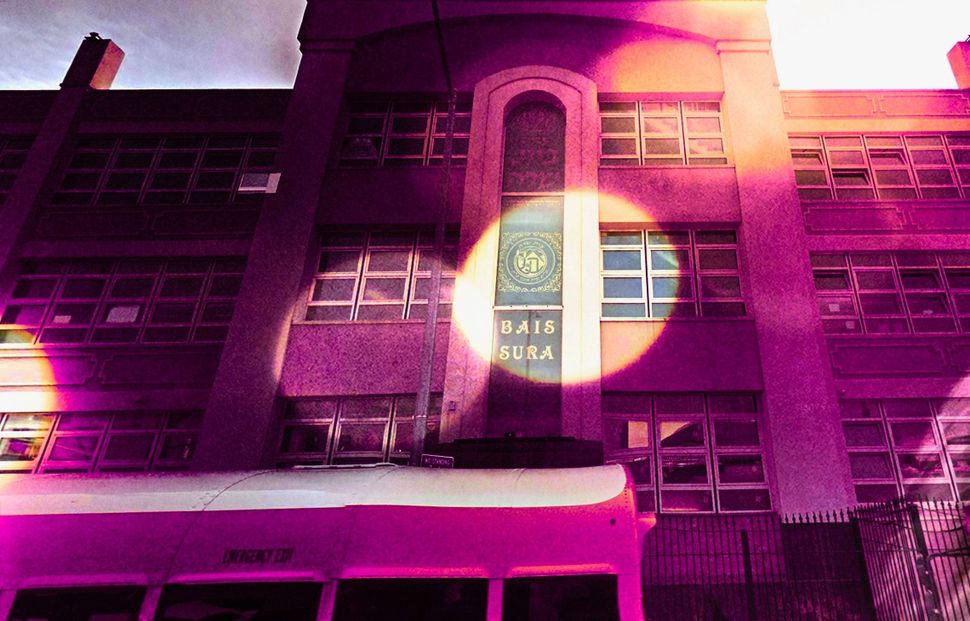 The principal of a prominent all-girls’ yeshiva in Brooklyn promised change after the school was rattled by an allegation of sexual misconduct by students against a long-time employee in May.

But in a letter sent to parents and in a phone interview with the Forward, the school’s longtime principal denied that any misconduct actually took place there or at its sister summer camp. He says the school will implement a new “protocol” to address future complaints that one expert says is too vague.

“There was never a problem at the school or at the camp,” said Rabbi Nuchem Klein, head of the Bais Sura school in Boro Park.

Klein claims that he only fired the employee, who is not Jewish, to satisfy angry parents and community members looking for a scapegoat.

“Since everybody went to blow it out of proportions, then I took it upon myself to take out this guy,” Klein said. “[There] was no evidence, was no witness, was nothing behind it.”

Klein refused to explain why the employee was fired if there was no evidence he did anything wrong, a stance that Dov Hikind, an Orthodox state lawmaker, called “sad.” The employee could not be reached for comment.

Bais Sura and its affiliated summer camp, Chayei Sura, are widely known in Hasidic Brooklyn. The school, with over 900 students K-12, has a reputation for good academics and prizing modesty. In April, the school was roiled by a recording on social media messaging platform WhatsApp that accused the employee of a history of misconduct — and Klein of covering up the alleged abuse.

Dov Hikind, a state assemblyman representing Boro Park, took up the parents cause and demanded Klein take action. The principal, who has been at the helm for decades, fired the employee later that day.

Shortly afterwards, Hikind says, several prominent Hasidic community members reached out to him to broker a meeting with Klein. In mid-May the two met at the home of Shiya Ostreicher, a prominent ultra-Orthodox political activist with strong ties to Albany. 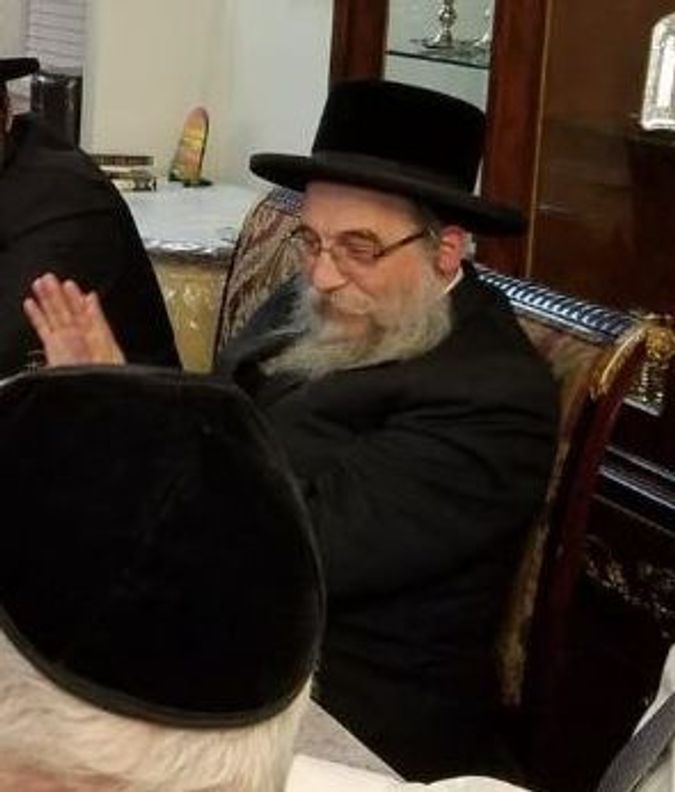 Rabbi Nuchem Klein, at the May meeting with Dov Hikind. Image by Courtesy Dov Hikind

The meeting led to Klein sending a letter to parents ostensibly addressing the issue, promising to implement a “protocol” to protect students. That includes having an “independent expert” with whom students’ could talk about any perceived abuse, and having teachers and staff go through “training.”

Hikind told the Forward on Thursday that more than a dozen Bais Sura parents had come to him in May, saying that they had brought accusations of sexual misconduct against the employee to Klein, who ignored them.

“This was not about a person, or two people,” Hikind said. “Something was wrong.”

Despite the principal’s efforts to play down the alleged misconduct, Hikind insisted that Klein’s willingness to meet with Hikind, and subsequently to send the letter announcing the “protocol,” was an “unprecedented” move in the cloistered world of ultra-Orthodox education. Hikind announced the meeting with Klein and the letter in a post on his official Facebook page Thursday.

“No one has ever done things like this publicly in the Haredi world,” Hikind said. “It is clearly an admission that something could have been done better.”

But in speaking to the Forward, Klein said that he was not admitting anything. He said that he only fired the employee to quell the backlash from parents. 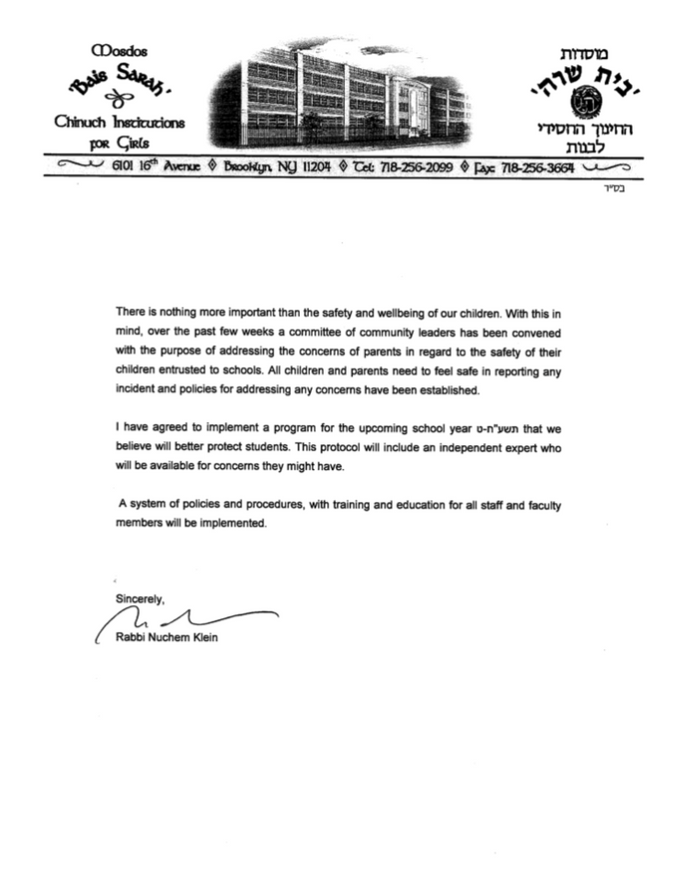 A copy of the letter sent to parents from Bais Sura’s principal, Rabbi Nuchem Klein. Image by Courtesy of Dov Hikind

The letter sent to Bais Sura parents is only three paragraphs long, and does not specify what kind of “independent expert” the school would employ, or what kind of training its staff would undergo. It also does not specify that the letter was prompted by concerns about sexual misconduct at Bais Sura. It states instead that community members met in response to parents’ concerns “in regard to the safety of their children entrusted to schools.”

Klein told the Forward that the school might pick the “independent expert” from among its current or former staff. He also said that he was going to wait until September, when the school year begins, to make any decisions about the planned “protocol.”

The vagueness of these pledges worried Asher Lovy, the director of community organizing at Za’akah, a group that promotes awareness of sexual abuse in the Hasidic community.

Lovy said that the “expert” Bais Sura hires needs to be a mandatory reporter — someone who is legally obligated to notify law enforcement about any allegation of sexual misconduct. He added that any training the staff undergoes should emphasize bringing such complaints directly to law enforcement, not only reporting them to Klein, and should include input from licensed mental health professionals.

“Unless they foster a culture within the school where students feel comfortable coming forward, then it’s really just a smokescreen to shield them from further accusations of abuse,” Lovy said of Klein’s letter.

The letter underwent several drafts over a few days before it was released, according to Shuly Halpert, an ultra-Orthodox education advocate who works in real estate and was present at the meeting. Halpert said that Hikind’s office first presented a version, which was countered with a version from Klein, leading to further revisions.

Halpert, who helps ultra-Orthodox children with special needs find placements in yeshivas, said that even though the resulting letter was vague, it was still a victory for the Hasidic yeshiva world. Prominent schools often have a lot of power and, at least in Bais Sura’s case, backing from prominent Hasidic leaders. Halpert added that the school is worth saving.

“There’s immense pressure from the parents to go into schools and turns desks upside down,” he said. “And I feel for the parents. But everything is a negotiation.”

Hikind said that despite Klein’s comments claiming nothing happened, he said he will still try to monitor Bais Sura’s planned “protocol.”

“No other school felt compelled to do this,” said Hikind. “Why is he doing it if nothing is wrong, if nothing happened? It’s really just sad.”