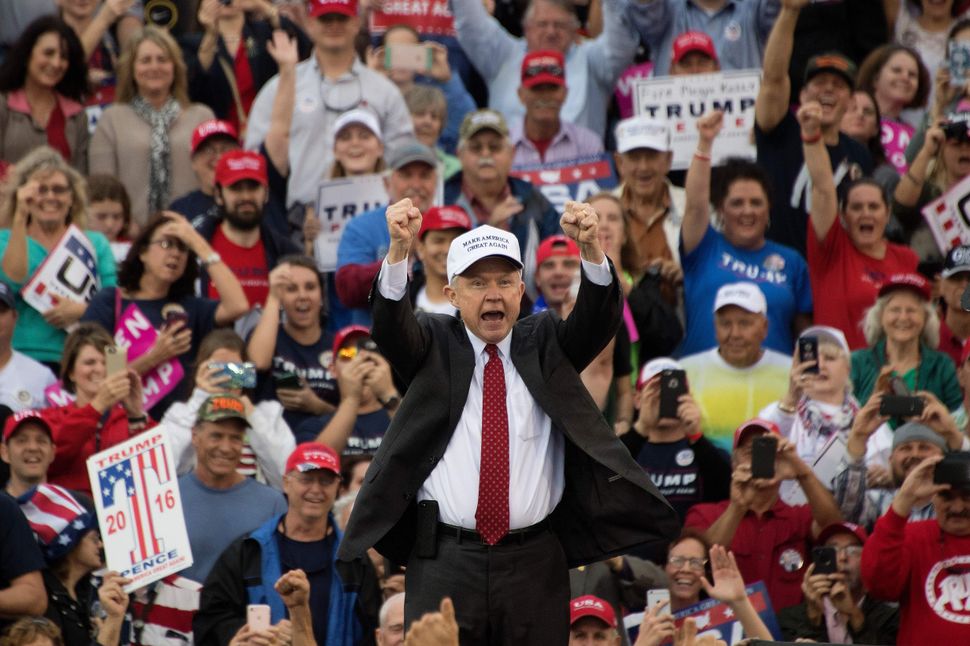 Jewish advocates mulled boycotting Orthodox Union products leading up to Shabbat after the organization honored Attorney General Jeff Session’s while he was under fire from progressive groups for the Trump administration’s policies separating immigrant families.

The Orthodox Union said they “took advantage of a private opportunity” before his Leadership Mission keynote address on June 13 to raise concerns with Sessions over his immigration policies after more than a 1,600 people signed a petition condemning families being separated at the boarder, but that still wasn’t enough of a strong statement for some.

Thank you for this. I stand behind a complete boycott of #OU products. Their repugnant alignment with #JeffSessions is a betrayal of Jewish values and ethics. We cannot stand idly by and allow them to profit while giving an award to a bigot. #BoycottOU #Kosher

Lost Angeles Esther said she’s been thinking about a boycott as a strong collective statement.

I’ve been pondering how the Jewish community can organize a coordinated action. I can’t fathom buying any OU stamped food right now.

We’re not Orthodox, but keep kosher. Not buying @OrthodoxUnion anymore either. @EmpireKosher please get new supervision for your products!

“Personally, I find the contention that the OU honored Jeff Sessions in the name of ‘religious liberty’ to be quite disingenuous and specious in the face of proposed Muslim bans and the recent Masterpiece ruling perverting the concept of religious freedom,” MaNishtana told the Forward via email on June 15.

“Furthermore the ‘private opportunity’ in which they supposedly expressed concerns to Sessions flies in the flies of the very public presentation of an award emblazoned with the words of ‘Tzedek Tzedek Tirdoff/ Justice, Justice You Shall Pursue’ in the face of everything the Trump administration has proven to stand for so far.”

But others in the Orthodox community said a boycott was not really feasible for many and could hurt some.

1) A boycott is not doable for most Ortho Jews & will actively harm us all in many ways
2) Vegetarian/vegan ≠ kosher, and many people can’t safely maintain a veg diet
3) Remember that there are communities + colleges w/ limited kosher options

There are other ways to protest! ?

The OU runs a mix of political, social and religious programs and is the world’s largest kosher certification organization, stamping more than 1 million products around the globe with its recognizable symbol of a “U” inside an “O.”

They also lobby for conservative social and foreign policy issues, including recognizing all of Jerusalem as Israeli’s capital and moving the embassy their from Tel Aviv.

T’ruah Executive Director Rabbi Jill Jacobs told the Forward she was happy the OU responded after their petition drive, though she wishes the statement was stronger, and added that she wasn’t sure on a boycott’s effectiveness.

“A boycott is usually a campaign strategy, but you have to use it in a place where there’s going to be an impact,” which she added could be tough in this situation “given most people buy OU products without even knowing.”

Jacobs said boycotts were often most effective when they focussed on a specific product, like the famous 1970s protest against buying non-union lettuce during the California farm workers strike.

The OU released their statement the day following Session’s speech, saying they were “deeply concerned about any steps taken that affect families and the parent/child relationship” and confronted the AG about his policies in private and urged him to seek justice using just means during a plaque presentation.

“Attorney General Sessions heard the concerns and questions of our community regarding these policies and offered his perspective and responses,” OU president Moishe Bane wrote in the statement.

“Importantly, the Attorney General committed to further dialogue with the OU on this important topic, which we will pursue.”

Jacobs said they would continue to apply pressure and were speaking with OU leaders.

“[The] OU heard the criticism loud and clear,” Jacob’s told the Forward, adding that Rabbis and congregants in the OU have also spoken out. “Hearing from the Jewish community and from the OU community should have an impact.”