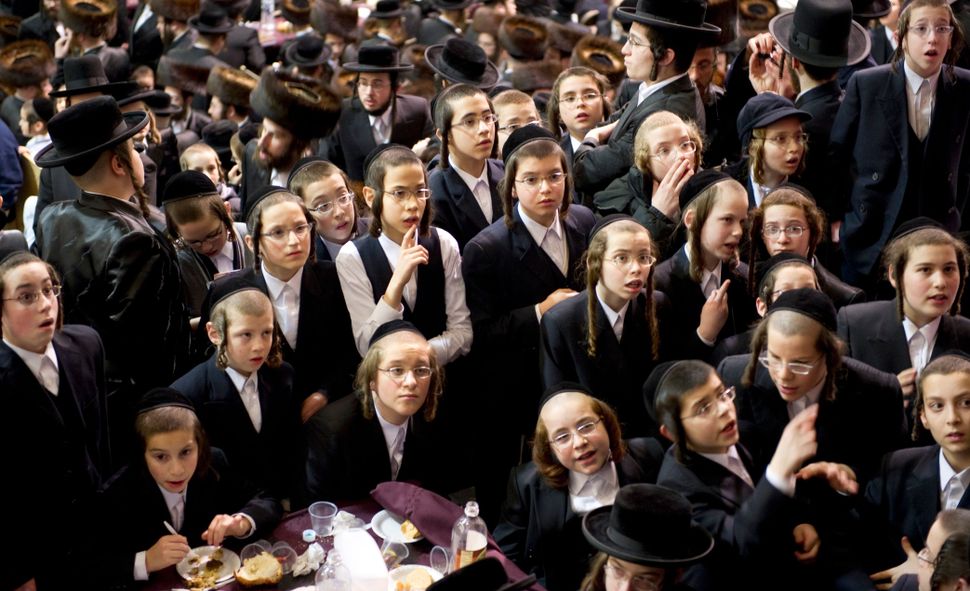 Boys at a large gathering of Hasidic men in New York City in 2011. Image by DON EMMERT/AFP/Getty Images

In 2015, New York City announced it was launching a major investigation into secular education standards at yeshivas. Three years later, no such report has surfaced.

Now, activists are calling on the city’s public advocate and comptroller to investigate the city itself for failing to address what they say are widespread educational shortcomings in the vast yeshiva system. They are accusing Mayor Bill de Blasio of ignoring the yeshiva world to protect his own political interests.

“At a very basic level, were talking about tens of thousands of children who are being denied their basic right to an education,” said Naftuli Moster, the executive director of Young Advocates for Fair Education, or Yaffed, a not-for-profit. “There are signs of a major scandal, but they really have taken no steps to solve this problem.”

The letter was sent jointly by Yaffed and Common Cause New York, a not-for-profit watchdog group, and accused de Blasio’s administration of intentionally slowing down its investigation into yeshiva education standards. It comes nearly three years after Yaffed demanded an investigation into the quality of secular education at 39 city yeshivas that the group said did not meet state requirements.

News reports suggested the report was forthcoming last summer, but it was never released. In public appearances, de Blasio suggested that the city’s Department of Education would release an interim report, but that was also never released.

In September 2017, Yaffed released its own report, claiming that the “average Hasidic boy” only received a few hours a week of secular education, which usually did not extend beyond basic English and math skills. The report says that after age 13, most Hasidic yeshivas for boys essentially stop teaching anything besides Judaic studies, with class periods reserved for secular topics treated as a kind of free time. The report also says that secular education standards at Hasidic girls’ schools are higher, because they are not expected to master Judaic studies and become rabbis.

“What we would like to see is that the mayor and Department of Education fulfill their obligations under state law to educate yeshiva students,” said Susan Lerner, the executive director of Common Cause New York. “This is an educational equity issue. This would be our response with any other community.”

In an emailed statement, a press spokeswoman for the mayor’s office wrote: “New York City students must get a high-quality education. The investigation is highly active and DOE is expected to deliver the report soon.”

Yeshivas are an educational powerhouse in New York. Taken as a whole, the state’s yeshivas have a larger student body than any other school district beside’s New York City’s public schools, according to Yaffed. They range from small schools with only a few dozen students to the Yeshiva of Flatbush, perhaps the largest Jewish religious school in the state, with several thousand students from early childhood education to high school.

Yaffed, however, is primarily concerned with Hasidic yeshivas operated by ultra-Orthodox groups in Brooklyn and the Hudson Valley. Hasidic yeshivas in New York City alone have nearly 60,000 students, according to Yaffed. These schools in particular, the group says, are unlikely to offer a sufficient level of secular education, instead focusing almost exclusively on religious learning.

Moster is a frequent subject of severe criticism in the Hasidic world. In 2017, Hamodia, an ultra-Orthodox news outlet, referred to him as a rodef in an editorial. The word, which means pursuer, is a Hebrew legal term, and implies that the rodef should be killed before they kill someone else. Moster said the editorial left him afraid for his life, and he filed a report with the NYPD.

Other ultra-Orthodox groups oppose Moster’s activism with less venom but no less resolve. On Monday, Parents for Educational and Religious Liberty in Schools, or PEARLS, a yeshiva advocacy group announced a “Protect Our Yeshivas” campaign to spread bumper stickers and posters with pro-yeshiva messaging. In 2016, the city announced its investigation, PEARLS hired consultants to create math and English lessons for yeshivas that would meet state standards. 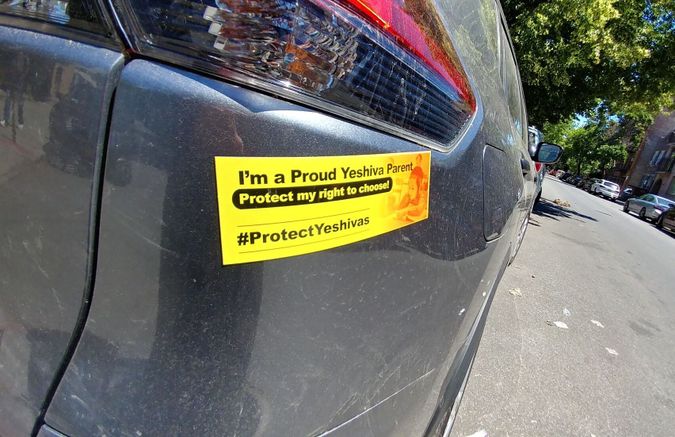 A bumper sticker created by PEARLS for their new campaign. Image by Courtesy of PEARLS

“[Jewish] studies are the backbone of our yeshivas,” said Rabbi David Niederman, a member of PEARLS’ executive committee and the director of United Jewish Organizations of Williamsburg. “And in addition to the religious subjects, we teach secular subjects. We teach as much as is needed. We definitely feel that we meet the requirements of the law.”

Niederman has accused Yaffed of seeking to undermine the Hasidic way of life. He said the timing of PEARLS’ announcement, just a day before Yaffed’s letter, was coincidental. But, he said, the organization feels confident that they have more influence than the activists.

“Our voice is much louder because it’s backed by hundreds of thousands of people,” Niederman said.

It’s not clear that there is much political will, either in New York City or in Albany, to challenge Hasidic communities on education because they consistently vote as a bloc, said to Hank Sheinkopf, a Democratic political consultant.

The political power of yeshivas was on display in late March, when a Brooklyn politician nearly derailed the state’s budget over funding to yeshivas.

State Senator Simcha Felder, who holds the balance of power in the chamber that is split between Democrats and Republicans, initially tried to force the legislature to end oversight for yeshivas before being urged to compromise by the governor and an influential rebbe.

Sheinkopf added that de Blasio, who entered his second and final term as mayor in January, is also not likely to delve into the issue.

“Does he want to spend his last two years in Brooklyn making his life miserable? That’s the question he faces,” Sheinkopf said.

But Moster says that public — and possibly political — opinion is on Yaffed’s side.

“Yaffed has never been as popular as right after Simcha Felder bullied the entire state legislature,” he said. “When you use your political power like that, it turns out people don’t like it.”

Update, 6/19/18, 9:15 a.m. — This article has been updated with information about educational standards at girls’ yeshivas.