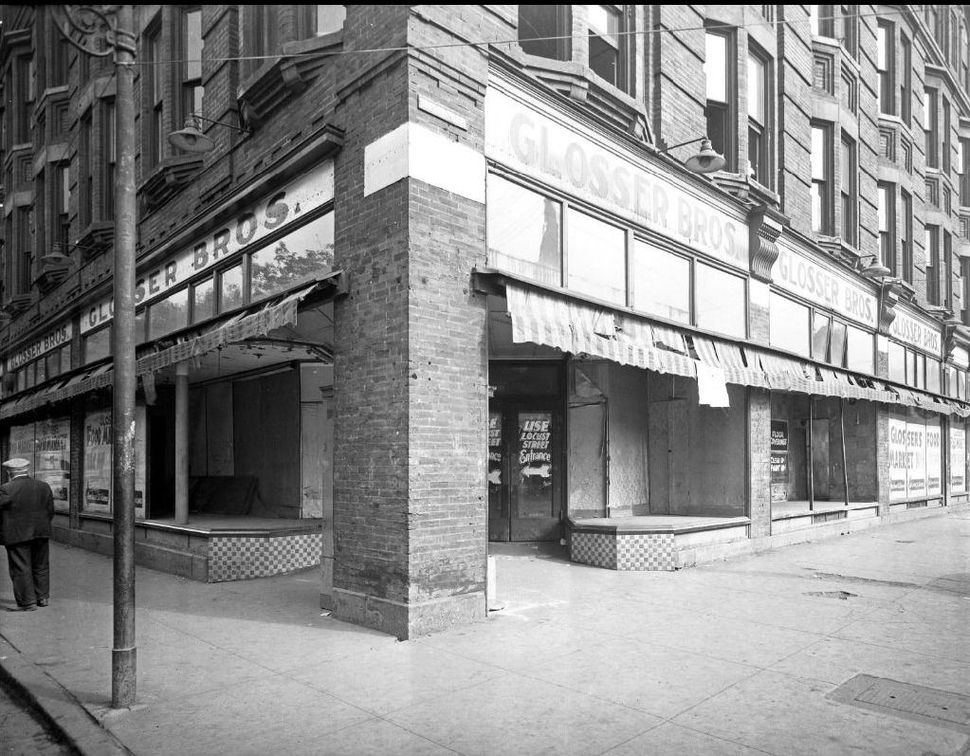 The exterior of the Glosser Bros. store in 1936. Image by Archives & Special Collections, University of Pittsburgh

Once upon a time, a man named Wolf Lieb Glotzer fled anti-Semitism in current-day Belarus and found himself in American coal country.

Glotzer’s enterprising sons also joined him in Johnstown, Pennsylvania. Before long, they Anglicized their names and opened Glosser Bros. Department Store. Like so many immigrants before and since, the family became known as a paragon of Jewish integrity and charity.

Now, Miller is aggressively pushing to prevent legal permanent residents to become citizens if they have participated in popular government programs like food stamps, public assistance — or even health insurance subsidies under Obamacare.

Miller’s furious war on immigrants — both legal and undocumented — could not be further at odds with his own family history. The story is a classic immigrant tale of assimilation and success, from a perhaps apocryphal fistful of dollars that Wolf Glotzer brought to Ellis Island, all the way through the leveraged buyout of the family business.

Miller’s uncle accuses him of besmirching the Glosser’s legacy as a family that won a piece of the “American dream” with a strong work ethic and a philanthropic streak.

“I guess every good family must have a mutant strain from time to time,” Larry Glosser, Miller’s cousin, wrote in 2016.

Miller is, of course, not the only Jew on the Trump train – roughly a quarter of Jews voted for Trump in 2016, according to the Pew Research Center. But Miller is unique among Jews for his obsession with immigration. According to a poll from the Jerusalem Center for Public Affairs, “immigration” didn’t even make it into the top six most important issues to American Jewish voters.

During the Trump campaign, Miller made no secret of his Johnstown roots — likely because it is home to a large slice of Trump’s base: white, working-class Americans in former industrial towns. At a campaign stop in Johnstown less than three weeks before the election, Miller touted his family’s history in the region. Though Hillary Clinton would win a narrow victory in Johnstown proper, over two-thirds of the surrounding Cambria County voted for Trump.

In telling the crowd of 6,000 about his family, Miller notably referred to his “immigrant ancestors” as the founders of Glossers. He said that his great-great-grandfather “came here from overseas to start his American dream.”

“We need to make sure that one day very soon, Johnstown will once again be a place where people come to make their dreams come true,” Miller added.

The Jews of Johnstown

When the American chapter of the Glosser family saga opened, Johnstown was a coal capital and a union stronghold. Jews first began coming to the area in a trickle in the mid-18th century, and then in larger numbers in the 1910s, according to “Insecure Prosperity: Small-Town Jews in Industrial America, 1890-1940,” by Ewa Morawska. In the first two decades of the 20th century, the town’s population nearly doubled, peaking at 67,000, according to U.S. Census records. The Jewish community was about 2,000 at the time, Morawska’s book says.

The Jews of Johnstown, unlike those in larger cities, were entrepreneurs. In major urban centers like New York and Philadelphia, Jewish immigrants overwhelmingly worked in factories. In Johnstown, roughly 80% of employed Jews worked in Jewish-owned businesses, predominantly in retail and groceries, according to Morawska’s book.

Wolf Glotzer’s sons opened a tailor shop in the center of Johnstown. Small, Jewish-owned stores were a common fixture in towns across the country. Glotzer’s sons and grandchildren would go onto expand the business into a chain of discount stores — Gee Bees — and dollar stores.

The flagship Glosser Bros. store, eventually located on Main Street across from the park, was a classic one-stop-shop, offering groceries, tobacco, magazines and clothes. It was famous for its wooden escalator, supposedly one of the first in the region, and its trademark roasted peanuts and cashews. The smell wafted from the first floor, across the street and into the park, drawing in customers all over downtown.

“Any time you’d think of that store, you would think of the smell of those delicious cashews,” said Robert Jeschonek, author of “Long Live Glosser’s,” a history of the store.

Around the Glosser’s business grew a robust Jewish community, roughly equal parts Reform and Conservative with a small Orthodox community downtown, according to Stephen Match, who grew up alongside David Glosser, Stephen Miller’s uncle. Match said that the Glosser’s were members of Rodef Shalom, the Conservative shul in Johnstown’s upper-class Westmont neighborhood, in the hills above downtown. Though the communities were strictly divided along movement lines, they shared in the same schedule then familiar to Jews across the country: Saturday services, Sunday school, weekday Hebrew school and synagogue youth group events.

This community was one of the most philanthropically inclined Jewish enclaves in the U.S. In the years leading up to and immediately after the founding of the State of Israel, Johnstown families gave to the fledgling country at a higher rate per capita of any other town or city. The community calculated that a full 0.2% of all money donated to Israel came from Johnstown.

The Glossers also remembered the Old Country in their philanthropy. Morawska reports in her book that one of the Glossers kept a ledger of the families that remained in Wolf Glotzer’s native Antopol, in Belarus. They regularly sent over large amounts of money to the community leader there, with a list of which families would be receiving support and how much. They kept up these donations until the community was liquidated by the Nazis in 1942.

Closer to home, the Glossers were also known to offer groceries, clothes and other goods to families struggling to make ends meet. One Glosser — Isidore, Stephen Miller’s grandfather — undertook to build a swimming club so that Jews would not have to settle for Class B membership at the local country club. Jeschonek said that the family took the anti-Semitism in the town in stride.

“They accepted it and did what they had to do in order to help the community thrive,” he said. “They kind of rose above it.”

The Glossers were respected patrons of all of Jewish Johnstown.

Match added that, with the exception of a couple Glossers, the family was modest about its wealth.

“They weren’t a showy family at all,” said Match. “You knew that they were Glossers and therefore had money, but their lifestyles never flaunted that wealth.”

For decades, the Glosser empire tried to outrun the economic downturn of the Johnstown area. They first opened a “Gee Bee” discount department store in the 1960s, followed by the dollar stores in the 1970s, even as the local steel industry was collapsing. They expanded in the 1980s, transitioning their brand further towards discount goods as the region’s wealth declined. By that decade, tens of thousands of steelworkers in the area had lost their jobs due to declining production and closing factories.

The company collapsed after the Glosser family, which had taken the company public in the early seventies, created a deal to have the Glosser corporation buy back their shares. The deal, chronicled in Jeschonek’s book, was a leveraged buyout in partnership with the now-defunct bank Bear Stearns, which loaned the company the money to pay the Glossers. According to one Glosser who spoke to Jeschonek, the deal was a way for the Glosser family to “cash out” of the business.

In the late 1980s, when the company couldn’t afford to pay off the loans on schedule, it declared bankruptcy. By 1991, all the stores had shuttered. Over 2,500 people lost their jobs, Jeschonek writes.

Even though the stores closed, Johnstown remembers them.

“The department store was definitely a local institution,” said Jeschonek. “It was very well loved by the local community, and continues to be well loved even though its been closed for quite some time. People have a lot of fond memories of the store and the family.”

The decline of Johnstown Jewry

Johnstown proper is now small and poor. Its population, in 2010, was a little under 20,000, nearly 40% of whom live below the poverty line, according to U.S. Census records. In 2013, CNN put it on a list of the country’s seven fastest-shrinking cities.

The Jewish community shrunk alongside it. In the 1980s, the Conservative and Reform synagogues merged, becoming Beth Shalom, Match said. That was the first decade the community lost members, according to Morawska’s book. By 1990, a Beth Shalom survey found only 415 Jews remaining in the area. Now that number is at about 90. Still, Beth Shalom keeps up its weekly services and community groups.

The exodus from Johnstown is part of a longer trend of Jews — and Americans in general — leaving small towns for urban centers. Particularly in towns in the so-called Rust Belt, smaller Jewish communities have hollowed out and disappeared. While some small towns have seen a resurgence in Jewish life, only about 5% of Jews now live in rural areas, compared with 20% of the general population, according to the Pew Research Center. Over the course of the 20th century, the Jewish populations of Rust Belt states like Ohio and Pennsylvania grew tepidly while Florida and California saw massive influxes of Jewish residents.

The Glosser clan left Johnstown towards the end of the business’ lifetime and spread primarily to Florida and California, where Miller was raised. Parts of the family have become deeply liberal, while others identify as Republican. The family is split on Miller’s role in the current administration, and if he is damaging the family’s legacy.

“But I don’t have any firsthand knowledge of whether he’s authored it,” Glosser added, of the travel ban Miller authored for the administration. “I only know what gets reported, and I don’t believe everything I read.”

In a lengthy Facebook post in 2016, David S. wrote, “[M]y nephew and I must both reflect long and hard on one awful truth. If in the early 20th century the USA had built a wall against poor desperate ignorant immigrants of a different religion, like the Glossers, all of us would have gone up the crematoria chimneys with the other six million kinsmen whom we can never know.”

Stephen Miller’s chapter in the ongoing story of the Glosser immigrant tale may be just another example of one immigrant family’s complicated legacy.

“They were good people. Really, thats the general consensus among those who have known them,” Jeschonek said of the Glossers. But, he added, “now we have a very different situation with one of the offspring of that family.”