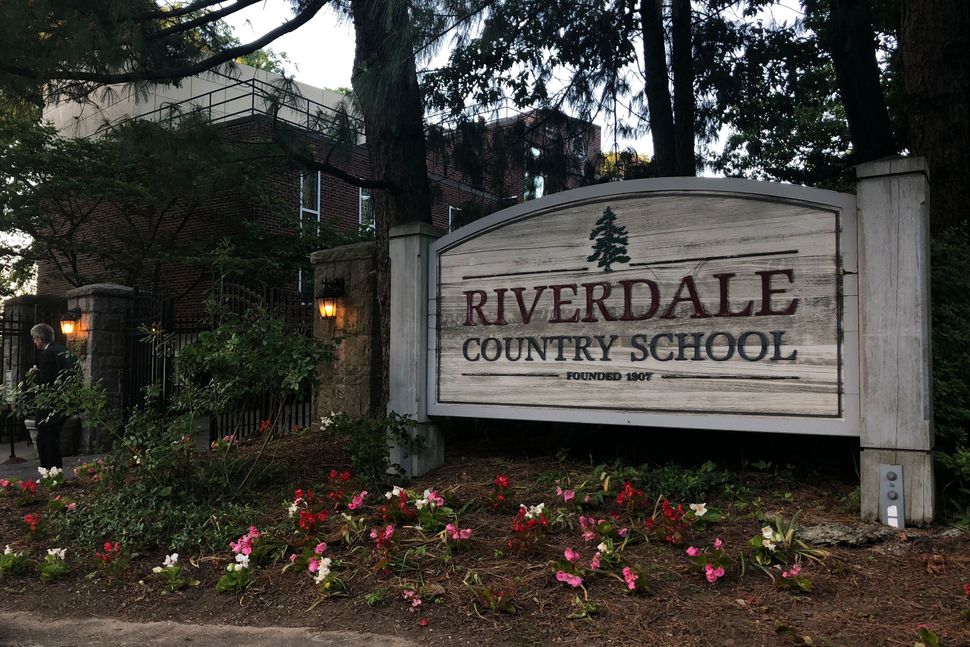 The Riverdale Country School in the Bronx. Image by Ben Fractenberg

Long-serving Riverdale Country School history teacher Joel Doerfler told the Forward he quit the elite Bronx private school “on principle” after administrators did not provide an “intellectual, pedagogical or ethical reason(s)” for cancelling a popular Israeli-Palestinian seminar he taught.

“I have taught the subject of Israel-Palestine in the same way I have taught all my other [courses]: with as much honesty and scrupulous regard for both fairness and justice as I am capable of mustering,” wrote Doerfler, who is Jewish and has taught at the school for over 25 years, in an email. “That’s all any teacher can ever do.”

Doerfler’s course was cancelled after a June 11 meeting that drew over 100 parents to talk with administrators on campus. The parents said the school fostered an unbalanced “anti-Israel, anti-capitalist, anti-American” sentiment and intimidated students who tried to challenge the narrative.

The parents also complained about another history instructor named Shawn Redden. They said Redden made anti-Semitic comments while teaching.

Redden was initially suspended but will not be returning to the school in the fall, according to the New York Post.

Riverdale Country sent a letter to parents the first week of July which said, that two faculty members were leaving the school. A source told the Post that the teachers were Redden and Doerfler: “We have looked into questions that were raised about the conduct of a very small number of faculty members and have initiated conversations with the faculty both broadly and specifically about the most effective and appropriate ways to deal with controversial subjects,” wrote Riverdale headmaster Dominic Randolph and board chairman David Westin in the letter.

Doerfler had an “agenda” and didn’t try to “balance what is an extremely complex issue,” a parent named Sam Levine, who has two children at the school, told the Forward after the meeting.

More than 85 Riverdale School alumni signed a letter posted on Medium that blasted what they called a “smear campaign” against Doerfler and a “stunning assault on academic freedom and the integrity” of the private institution after the seminar was cancelled.

Doerfler had published a 2016 article in Mondoweiss lamenting that “several particularly obnoxious parents” complained about his teaching.

“What teacher, after all, wants to take on the Israel Lobby and its local minions? In particular, what non-Jewish Riverdale teacher would want to wade into this hornet’s nest, knowing that unless he teaches the Zionist party line about Israel they may very well be accused of anti-Semitism?” Doerfler then asked rhetorically in the article.

Levine told the Forward after the assembly that he took particular issue with the article.

A student who was in his class said she never heard him make anti-Israeli statements.

“Shawn Redden is in no way an anti-Semite nor would he ever make such boldly offensive claims. To say so is slanderous. This is a man being attacked for holding views with which many Riverdale parents disagree, and this response is deeply disturbing to many of us who truly know his admirable character and contribution to our community,” said the rising senior, who asked to remain anonymous.

Another alumnus set up a GoFundMe page to support him.

The Israeli-Palestinian conflict has become a hot-button issue at schools around the country, particularly after the latest protests in Gaza, where Israeli forces killed 60 Palestinians.

Some parents and Zionist advocates criticized a moments of silence held at Manhattan’s Beacon School for Gazans after the protests.

Riverdale Country alumni said they wanted to ensure the school did not stifle honest debate.

“We refuse to be silent as members of the parent body seek to cleanse our alma mater of ideas that they may find disagreeable and call on the Riverdale administration to ensure that such basic assaults on academic freedom never happen again.”