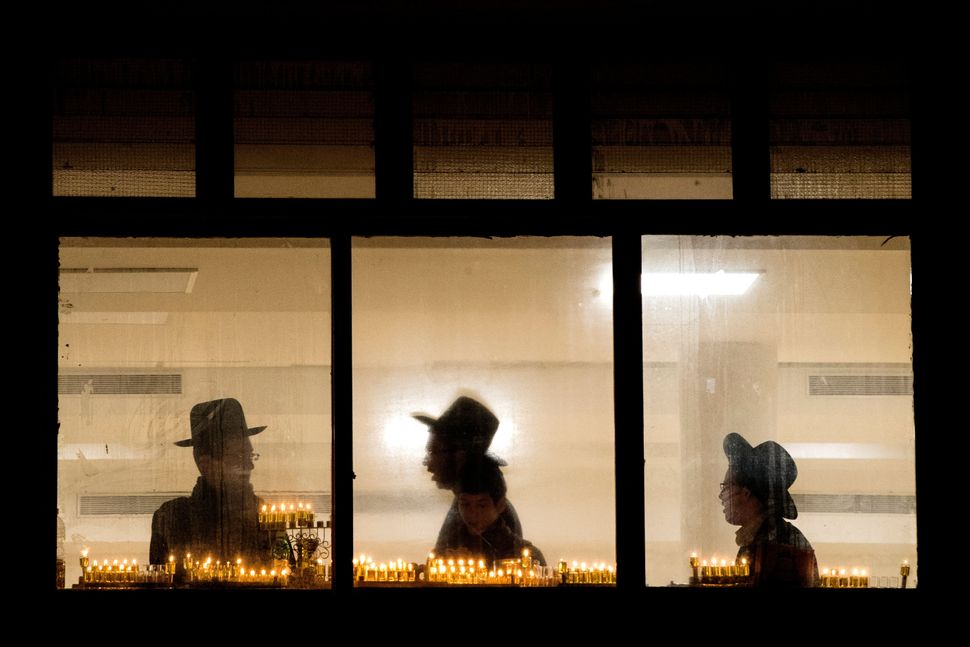 Orthodox students in a yeshiva. Image by Jack Guez/Getty Images

More than 100,000 children in Orthodox Jewish schools in New York state are getting a substandard education that makes it virtually impossible for them to function in secular society, a federal lawsuit brought by former students alleges — but the suit has a potentially fatal legal weakness that might get it thrown out, experts say.

The group Young Advocates for Fair Education filed the suit on Monday arguing that Gov. Andrew Cuomo violated the Establishment Clause of the Constitution and state education standards when he allowed some schools to ignore certain state standards after Borough Park State Senator Simcha Felder held up state budget negotiations in April over the issue.

But a constitutional law expert told the Forward that a judge might throw the suit out, since no parent with children currently in the schools are signed on as plaintiffs.

Law professor Robin Charlow says that even though the not-for-profit, also known as YAFFED, was founded by a man who went through yeshiva education, the suit could be tossed if they don’t have any plaintiffs or YAFFED members with children currently in the schools.

“They could have a standing problem unless they can somehow personalize the injury and identify a concrete remedy the court could afford them,” said Charlow, who has taught at Hofstra University for 30 years.

There are 273 Orthodox yeshivas in New York state, 211 of which are in Brooklyn, teaching 115,000 elementary and high school students annually, according to the organization.

The group conducted a 2017 survey they said “shows average young Hasidic man leaves the yeshiva system completely unprepared to work in — or interact with — the world outside his community” due to speaking little to no English.

The professor added they had a much stronger case in arguing the standards carve-out favors a specific religion if the judge lets the suit go forward.

“If the amendment is targeted to these particular schools in clear way then there could be an Establishment Clause problem,” Charlow said. “So if the state has reason for [education] standard in first place there doesn’t seem to be much of a neutral reason for changing the standards for these schools.”

The advocates argued in the legal filling that they do have the legal grounds for suing, because the “Felder Amendment” thwarts their mission, “which is to ensure that all students within the ultra-Orthodox community receive the critical tools and skill sets needed for long-term personal growth and self-sufficient futures.”

YAFFED founder Naftuli Moster said they brought the suit to stop “special interest groups and individuals” who sought to hurt children’s access to a quality education.

“Nowhere have they been more successful than right here in New York, where many yeshivas have gotten away with providing no secular education at all, or at best a very limited one, to tens of thousands of children,” Moster said in a statement. “This sub-standard secular education was codified into law with Senator Felder’s amendment.”

Many of those children grow up to be young men who have large families at a young age and then depend on public assistance, YAFFED found.

The group explains on their website why they feel it is difficult to get parents within the community to speak out publicly.

“Within the Hasidic community, many parents and former Yeshiva students are extremely frustrated by the state of Hasidic education, but they often refuse to speak up and demand change for fear of reprisal,” the group’s FAQ page says. “The ultra-Orthodox and Hasidic community have a long history of threatening livelihood, intimidation and expelling children from Yeshiva when parents speak against the status quo.”

“Today’s lawsuit recycles many false claims about yeshivas that were previously made in Tweets, Facebook posts and press releases. They are no more true or valid now that they are contained in numbered paragraphs,” the group said in a statement published Monday. “The depiction of yeshivas in YAFFED’s complaint is supported only by YAFFED’s own self-styled ‘report,’ which was itself based solely on a small group of self-selected YAFFED Facebook friends. And even among that group, there are literally zero complainants about the vast majority of yeshivas YAFFED continues to mischaracterize.”

Cuomo spokesman Rich Azzopardi said the governor’s office had yet to receive the complaint.

“Earlier this year in the budget, the legislature passed a law that sought to balance the unique needs of yeshivas with the high educational standards we require for every New York student, and we remain committed to achieving that balance,” Azzopardi said in a statement.

Felder’s office did not return a request for comment.