Rabbi Will Do Interfaith Weddings – If The Kids Are Jewish 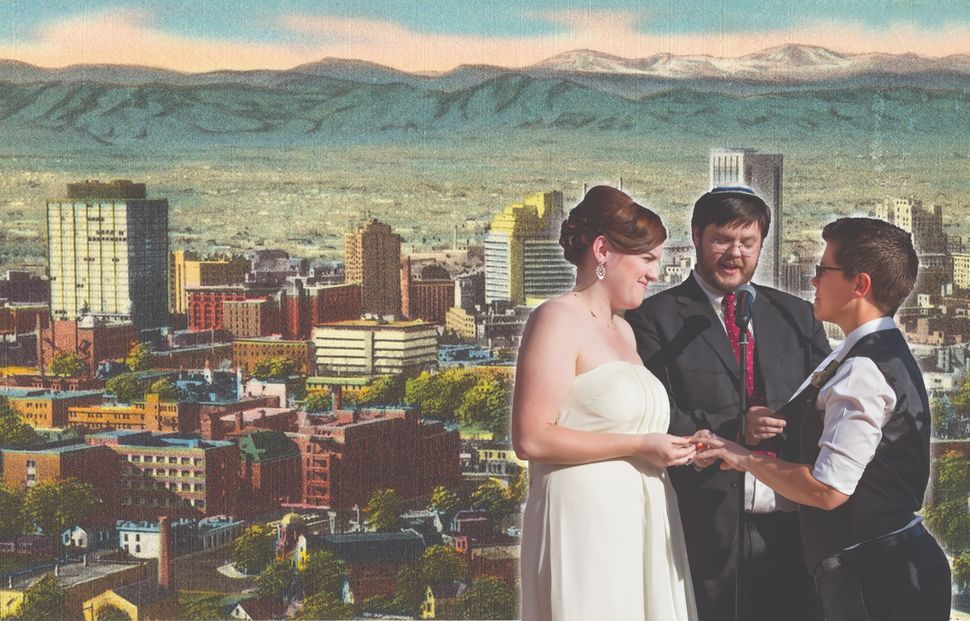 After mulling over the controversial question for three decades, Rabbi Joe Black has changed his mind. The leader of the largest Reform congregation in the Denver is now conducting interfaith wedding ceremonies.

In a letter and sermon to his synagogue, Temple Emanuel, in May, Black said that he could not in good conscience turn away a couple that wants to bring Jewish tradition into their marriage. He said that he no longer believes that only a family with two Jewish parents can raise engaged Jewish children, and cited both academic studies and his experience with interfaith families at Emanuel.

“I realized that these were people that were active in the community and building a Jewish life, and I was pushing people away,” Black said. “That became the proverbial straw that broke the camel’s back.”

Black’s announcement signals a shift in Denver and its roughly 85,000 Jews, and is emblematic of a larger trend in American Judaism. Until several years ago, none of the city’s pulpit rabbis officiated at interfaith weddings. The community is inclusive in other ways, Black and others say, and has a thriving LGBTQ community and a streamlined conversion process for new Jews. Black wants to bring interfaith couples in — but not every interfaith couple. He has standards. He requires, for example, that the couple commit to raising Jewish children. For supporters of interfaith wedding officiation, Black’s decision is a step in the right direction — if not quite as far as they would have liked. 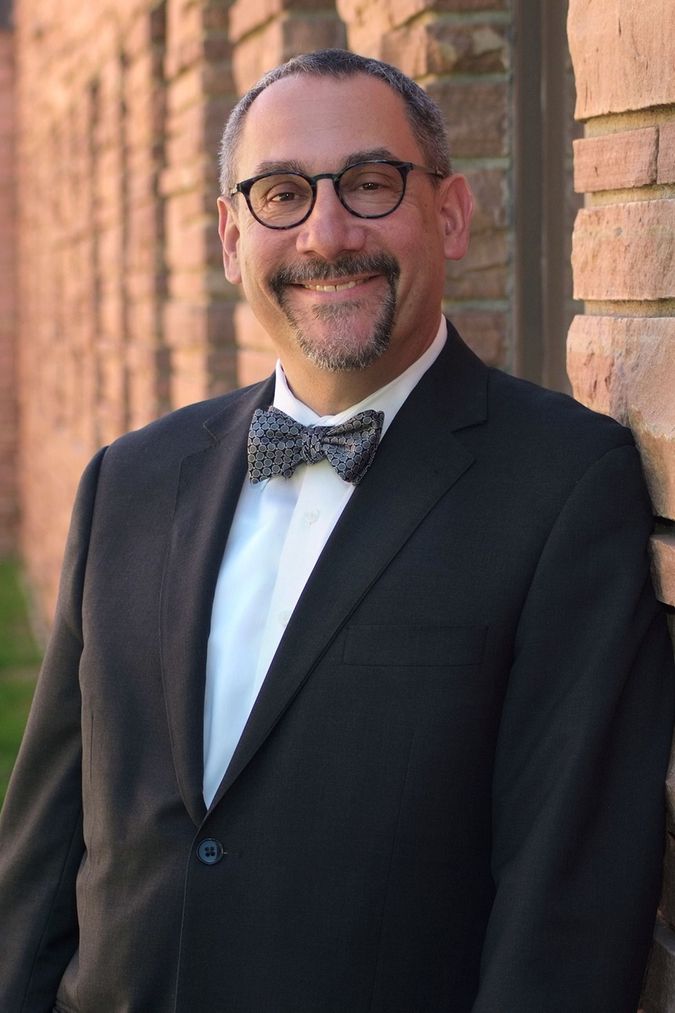 “This is the authentic way for Rabbi Black to do this with integrity, and we see a more expansive way to do this,” said Wendy Aronson, the executive director of Judaism Your Way, a not-for-profit that provides officiants for interfaith weddings in the Denver area. Ideally, she told the Forward, the rabbi would marry any couple that seeks him out. Still, she understands his position and is glad he has made the change.

Black is nationally known for his work as a writer and performer of Jewish songs for children. His works include the Hanukkah classics “Soufganiyot” and “Judah Maccabbee.” He became Emanuel’s senior rabbi in 2010, taking over for the long serving Rabbi Steven Foster.

He’s now one of a handful of rabbis in the Denver area, along with Rabbi Adam Morris, of the Reform synagogue Temple Micah, and Rabbi Kim Harris of the Reform synagogue Congregation B’nai Chaim, to officiate at interfaith ceremonies. Black estimates that over 40% of the 2,000 families at Temple Emanuel are interfaith. He said in particular he began to feel that it was wrong for him to turn down interfaith couples that were seeking him out.

“As open and welcoming as I tried to be, it still pushed people away,” he said, adding that his “not officiating was a door slamming in their face.”

Indeed, a 2008 study from the National Center of Jewish Policy Studies, at Hebrew College in Newton, Mass., suggested that interfaith couples who get turned down when asking a rabbi to officiate their wedding often sour on the Jewish community in general. Conversely, that same study found that interfaith couples that have their wedding overseen by a rabbi are much more likely to raise their children Jewish. Broadly increasing acceptance of interfaith families has also made children in such families more likely to be engaged Jews, according to a 2017 study from professors at Middlebury College and Brandeis University that made a big impression on Black’s thinking.

Opponents of interfaith officiation say that it weakens Jews’ relationship to halakha, or Jewish law. Rabbi Jeremy Kalmanofsky, writing in the Forward in 2015, said that it is important to maintain Judaism’s special covenant with God.

“Please link your individual lives to this eternal community, which is bigger than us and devoted to loftier missions than our own happiness (though we want you to be happy),” he wrote. “To those not born Jewish, please join our people.”

Rabbis in favor of interfaith officiation point to the enormous number of interfaith families to potentially bring into synagogue life. The 2013 Pew Research Center report on American Jews found that 70% of Jews who got married after 2000 wed non-Jewish spouses.

Though the Reform movement, which includes over a third of American Jews, has no official stance on interfaith officiation, it has positioned itself as the home of interfaith families in Judaism. It has allowed its rabbis to marry interfaith couples since 1973, when it encouraged inclusion of already-married interfaith couples and officiation under certain circumstances. Still, back then, it officially “discouraged” the practice. A 2010 press release from the rabbinic association did little to update the 1973 resolution.

There are no hard numbers on how many rabbis within the movement officiate interfaith weddings. A study from 1995 of Reform and Reconstructionist rabbis found that about half officiated interfaith weddings. Edmund Case, the founder of Interfaith Family, an education and support network for mixed-religion couples, said that now that proportion is likely much higher.

The Conservative movement, which counts about a fifth of American Jews as adherents according to Pew, has made efforts to include some of these families. Though its Rabbinical Assembly reaffirmed its ban on officiating interfaith weddings last fall, it also encouraged rabbis to seek other ways to reach out to interfaith couples. The Forward reported in February that the Assembly’s ban on its rabbis attending interfaith weddings has also never been enforced. Rabbis have left the movement in recent years so they could perform interfaith weddings.

Orthodoxy, with a tenth of America’s Jewish population, remains staunchly opposed to interfaith officiation — though even in that community one rabbi suggested last year that his colleagues consider that stance. He was criticized by other Orthodox rabbis for his statements. 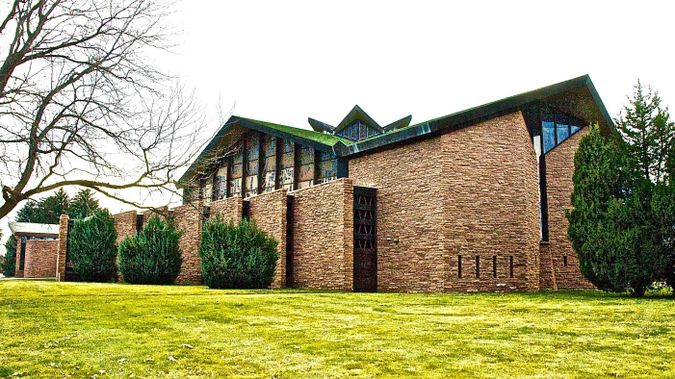 Black says that his announcement has been well received in his congregation, and that he has not gotten any pushback. Jill Giller, who has been a member of the synagogue since 1976, said she likes that Black’s decision makes inclusion more front and center at Emanuel.

“Being part of a community that welcomes people and includes them is of critical importance now,” Giller, who is not part of an interfaith couple, told the Forward. “I feel quite pleased and proud that my rabbi would be supportive of this.”

He has also received support from rabbis in the Rocky Mountain Rabbinical Council, the region’s interdenominational rabbinic agency, according to its current president, Rabbi Salomon Gruenwald.

“I respect the integrity with which Rabbi Black has approached the decision to officiate for couples who make a commitment to having an exclusively Jewish home,” Gruenwald, a rabbi at the Hebrew Educational Alliance, the largest Conservative synagogue in Denver, wrote in an email. “I also admire how Rabbi Black is serving as an example of how a rabbi can evolve through a long career.”

Black’s new policy has conditions, however, which he listed in an email to congregants. For one, the weddings must be exclusively Jewish: no clergy from other religions. They can’t happen on the Sabbath, either. And each couple must commit to attending pre-marital counseling sessions with Black and commit to raising Jewish children.

Black says those stipulations are in line with how he’s always viewed his role as an officiant, or mesader kiddushin in Hebrew: to conduct a fundamentally Jewish ceremony. He said that he’s never felt that Jews and non-Jews shouldn’t marry and have families — in fact, he’s been mulling over whether to officiate interfaith ceremonies since the beginning of his rabbinate, in 1987. Before now, he felt he couldn’t conduct a Jewish ceremony without two Jews under the chupah, or wedding canopy. But now his focus is less on the individual backgrounds of the people getting married, and more about bringing more people into the Jewish community.

“The reason I’m officiating is to celebrate Jewish life,” he said.

Some proponents of interfaith inclusion in Judaism say that even those conditions may still leave some couples out in the cold. Case, the founder of Interfaith Family, said that though he supports Black’s decision, he wishes it had come without any strings.

“There are a lot of couples that are looking for officiation without conditions, or [with] co-officiation,” Case said.

Case said that the goal should be to warm interfaith couples to the idea of actively participating in Jewish life — a goal that may be what prompts some rabbis to co-officiate with clergy from another religion, for example.

“They’re probably thinking that the more embracing they can be of the couple, the more positive they’ll feel about anything Jewish, and go in that direction,” Case said.

Aronson, of Judaism Your Way, agreed with Case, though she added that her organization welcomed Black’s announcement. She worries that interfaith couples who get told “no” may leave Judaism altogether. Her organization does not require couples to commit to raising their children Jewish.

“For some couples, this is going to be a sigh of relief, that, ‘Ok, I can have a Jewish officiant at my wedding,’” she said. “For some this won’t go far enough.”

Black says that his conditions are the same as they’ve ever been — and they’re conditions that even Jewish couples have failed to meet. He says he’s turned away couples who didn’t want God or Israel mentioned during their ceremonies — a request Black says he cannot grant, because of the liturgy read at weddings.

“As a rabbi, my role is not to do whatever people want,” he said. “My role is to help people find pathways into Jewish life.”

Black already has several interfaith ceremonies lined up. The first, in August, will be a renewal of vows between two longtime Temple Emanuel members. Black said that though the non-Jewish partner has never converted, he has always been an active part of the community. He thinks it’s a fitting way to begin his new chapter as an interfaith officiant.

“They want this extra level of affirmation for their relationship, to both our synagogue and the Jewish people,” Black said of the couple. “Their goal is to continue having a Jewish home.”

Update, 7/30/18, 11:15 a.m. — This article has been updated with information from a 1995 study about Reform rabbis officiating interfaith weddings.

Rabbi Will Do Interfaith Weddings – If The Kids Are Jewish