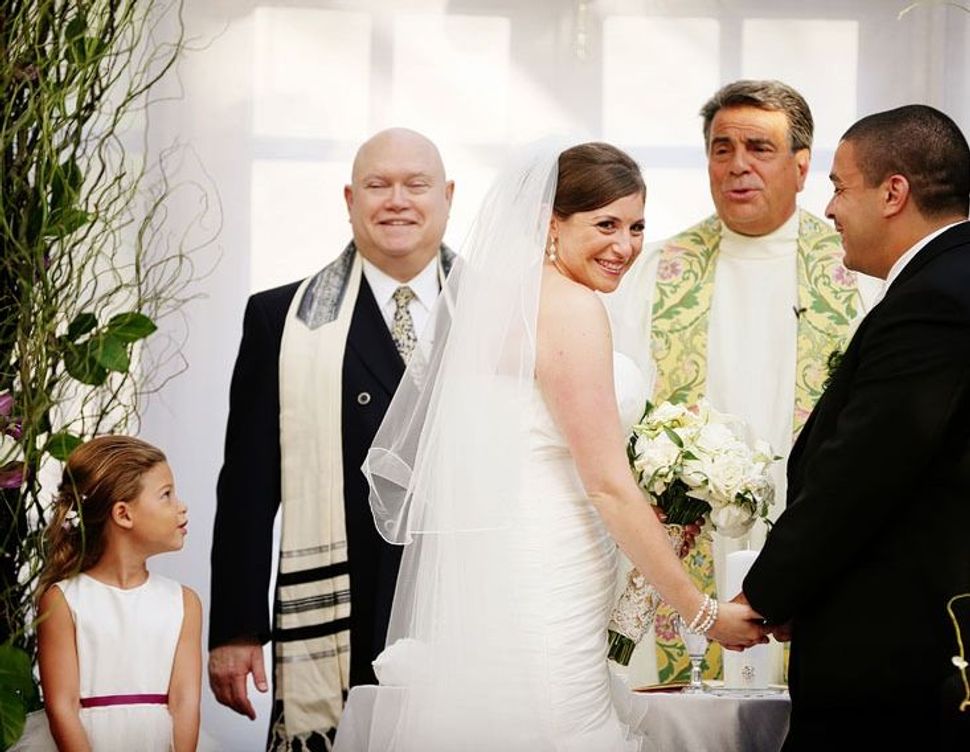 Rabbi Lev Baesh has co-officiated a wedding with a Native American chief on the shores of Lake Michigan. He conducted Paris’ first Catholic-Jewish ceremony. One time, he stood under the chuppah with a Hindu pandit; another, with a Shiite cleric. Things finally got tricky with an evangelical preacher — who’d been asked by the Jewish groom not to mention Jesus.

“During the wedding, when he was emoting and speaking off the cuff, it just came out,” Baesh remembered. “I watched [the groom’s] mother gasp for air.”

Baesh said he smoothed things over by speaking about blessings — how we should accept them no matter what faith they come from. That’s how Baesh thinks about co-officiating interfaith weddings, in a nutshell.

“My belief, very strongly, is that we should say ‘Yes’ so that people feel that Judaism wants them,” Baesh said. “Whatever they decide later in life, I don’t want their wedding to be the thing that turns them away.”

Baesh is part of a growing minority in liberal Judaism. Nearly half of Reform and Reconstructionist rabbis who answered a recent survey said they would share ritual duties for a wedding with clergy from another faith, according to the first poll of rabbis on the question of interfaith officiation in over two decades. InterfaithFamily, a not-for-profit education and support network for mixed-religion couples, conducted the survey. It suggests that the debate about whether Jewish clergy should officiate at interfaith weddings now decisively includes the matter of co-officiation with clergy from other faiths. The question, as ever, is whether lowering the barriers to entry for Jewish ritual represents risk or reward for the Jewish future.

“The Reform movement since its beginning has asked itself, ‘Are we the doorway out or the doorway in?’” said Rabbi Naamah Kelman, dean of the Jerusalem campus of the Hebrew Union College-Jewish Institute of Religion, which ordains Reform rabbis. “And sometimes it seems like we let the doorway open really wide in either direction.”

Proponents of interfaith unions point to powerful demographic data that shows just how interfaith the American Jewish community already is. The 2013 Pew Research Center’s report on American Jewry found that 70% of Jews who got married after 2000 wed non-Jewish spouses. The majority of these families appear to be part of the Reform movement, which is very welcoming to interfaith families, and accounts for a third of the total American Jewish population, according to the Pew Research Center. But the Reform movement has also hemorrhaged members — according to Pew, 28% of Jews raised Reform have left organized Judaism completely.

Co-officiation with clergy of other faiths has long been considered something of a line in the sand for many rabbis. They worry that it undermines the traditional goal of Jewish unions: creating a Jewish home and raising Jewish children. Rabbi Joe Black, leader of the largest Reform congregation in Denver, recently announced his intention to lead interfaith weddings after three decades in the pulpit. But as he told the Forward in July, he wouldn’t co-officiate much in the same way he wouldn’t perform a wedding on the Sabbath.

“As a rabbi, my role is not to do whatever people want,” Black said. “My role is to help people find pathways into Jewish life.”

Data about officiation practices has been scarce. This latest batch, from InterfaithFamily — an organization hardly disinterested in the results — is based on an opt-in survey, meaning it shouldn’t be taken as an exact representation of the population its sampling from. The vast majority of respondents were from liberal Jewish denominations of Reform and Reconstructionist. A small fraction was from the centrist Conservative movement. Jodi Bromberg, the executive director of InterfaithFamily who oversaw the survey, said that rabbis who are sympathetic to interfaith unions were more likely to respond than others.

Click here to view the full report from InterfaithFamily.

The survey included responses from nearly a quarter of Reform rabbis and nearly half of Reconstructionist rabbis. 85% of all the respondents – 881 rabbis in total – said they officiate at interfaith weddings under either all or some conditions. A quarter of respondents said that they “co-officiate” – equally share ceremonial duties with clergy from another faith. Another 20% said they would allow clergy from another faith to participate in the ceremony, but only if they left out non-Jewish theological references – Jesus, for instance.

This is the best data gathered since 1995, when a rabbi and researcher polled 710 Reform and Reconstructionist rabbis and revealed that only 13% would co-officiate.

Besides being open to officiating alongside other clergy, the survey suggests that the rabbis are broadly open to the non-Jewish spouse’s own religious practice. A fifth of rabbis polled stipulated that the non-Jewish partner have no commitment to another religion. 2% required a conversion either before or after the wedding. However, a majority of respondents who generally officiate interfaith weddings (59%) said they require couples to commit to having a Jewish home.

That mix of attitudes — lenient about the partner’s faith, but insistent on the Jewish home — reflects that what most rabbis are really trying to do when they co-officiate: keep people in the faith, according to Sarah Bunin Benor, a professor of Jewish Studies at HUC-JIR in Los Angeles.

“Even in those lenient stances, you see a concern for Jewish numbers,” Benor said. “And also, just for the individual connection to Jewish life.”

The survey respondents added comments that reflected that attitude.

“I believe that interfaith families represent a hopeful element in modern Judaism,” said one rabbi who took the survey. “The Jewish interfaith ceremony that I have created is based upon the fact that I absolutely will not risk losing the next generation of Jewish children.”

Despite the increasing tendency of liberal Jewish rabbis to officiate at interfaith weddings, some couples still struggle to find rabbis — and other clergy — who will participate in a co-officiated ceremony.

“It is a mistake to say that the battle is won here, because I think there is still a lot of prejudice against interfaith families in Jewish life,” said Bromberg.

Bruna Bouhid, 27, said she’s reached out to ten synagogues in the Tampa, Florida area in her search for clergy to marry her and her fiancé Michael, a Reform Jew. Only three rabbis have responded to Bouhid, who is Catholic. One said he was busy on the appointed day, and the other two declined to co-officiate. Likewise, the five priests she’s contacted have declined to co-officiate with a rabbi.

I’m going to write a book about how hard it’s been to find a Rabbi and a Priest to co-officiate our interfaith wedding ceremony. ?


“This is a story of two different people from two different cultures and religions, who want to bring love in the world,” said Bohid, the communications director of United We Dream, a national activist network for young immigrants. “I thought that would be a really powerful message for the time that were in.”

The shift toward acceptance of co-officiated weddings may be speeding up, however. The numbers in the report also suggest that openness to co-officiation is growing for younger rabbis. For rabbis ordained before 2000, about a third said they would not co-officiate at all, and wouldn’t refer the couple to a rabbi who would. That number dropped to 18% for rabbis ordained after 2010.

According to Kelman, of HUC-JIR, those changing attitudes may be buoyed by a growing number of Reform and Reconstructionist rabbis who themselves come from interfaith homes. She estimated that up to 40% of some of her incoming classes are students raised by one Jewish parent and one non-Jewish parent.

The cover image for this article was taken by Alison Conklin, a photographer based in Philadelphia. To view more of her work, click here.