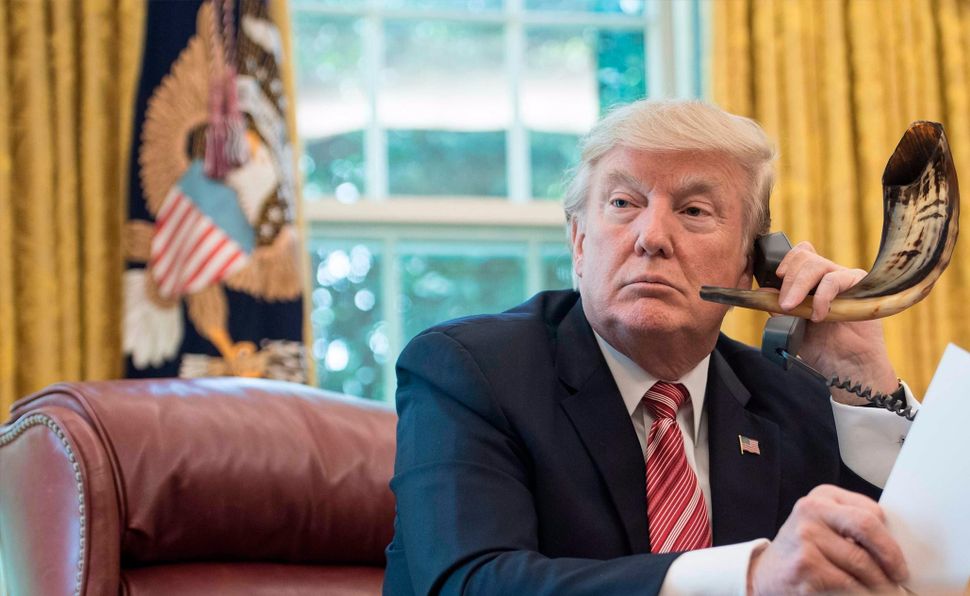 President Trump’s annual pre-Rosh Hashanah phone call to Jewish groups on Thursday lasted only 20 minutes but featured four allies singing his praises to an audience far more right-wing than calls under past administrations.

Similar calls under President Obama featured longer back-and-forth conversations — and sometimes tough questions from rabbis. Trump’s first call last year lasted only a few minutes and featured no questions at all. This one had two — but they were softballs from Republican Jewish Coalition chairman Norm Coleman and Trump’s informal adviser Alan Dershowitz, both of whom heavily praised Trump’s policies before their queries.

Coleman’s question about countering Iran, for example, was preceded by paragraphs of praise for Trump and his staff, according to a transcript released by the White House.

“On behalf of over 50,000 members of the Republican Jewish Coalition that I chair, please allow me to thank you for the courage and wisdom you’ve demonstrated, and the promises made and promises kept this year that have really strengthened the U.S.-Israel relationship,” Coleman began.

“I agree with that,” Trump responded.

Dershowitz asked if the Jewish community should be optimistic that Trump could bring about an end to the Israeli-Palestinian conflict.

“I think the answer to that is a very strong yes — you should be,” Trump replied. “It is, as I said before, really considered to be one of the toughest deals to make of any kind. I don’t kind what kind of a deal you’re talking about. If you look at Israel and the Palestinians, it’s always top of everybody’s list in terms of levels of difficulty. But we’re going to be able to get it done.”

Trump also defended his decision to cut funding to the United Nations’ Palestinian refugee organization. “The United States was paying them tremendous amounts of money,” Trump said. “And I’d say, you’ll get money, but we’re not paying you until we make a deal. If we don’t make a deal, we’re not paying.”

Also present on the call was Trump’s son-in-law and senior adviser Jared Kushner, who introduced Trump, and Ambassador to Israel David Friedman, who also praised Trump’s decision to move the U.S. embassy from Tel Aviv to Jerusalem. Friedman said that the new embassy building has become a “major tourist site” where people take pictures and even cry.

The invitations to the call only went out late last week, leading many to believe that it was an afterthought. The call was organized during the Obama administration by organizations from the Reform and Conservative streams of Judaism, but those groups boycotted the call last year to protest Trump’s handling of the white nationalist march in Charlottesville, Virginia. The head of the Reform movement’s Religious Action Center told the Religion News Service that they would not participate this year either if they were invited.

The invite list to Trump’s call last year was expanded beyond rabbinic groups to include hawkish advocacy organizations like the RJC, the Zionist Organization of America and the Simon Wiesenthal Center. This year’s invite list included for the first time the Coalition for Jewish Values, a right-wing Orthodox rabbinic group. The CJV’s press release said that several other organizations were also invited to participate for the first time.

Trump mentioned that several Holocaust survivors were also present on the call. New York Democratic state assemblyman Dov Hikind hosted a delegation of survivors in his office. Trump praised Hikind for advocating for the deportation of a former Nazi prison guard. The Trump administration processed the deportation earlier this year.