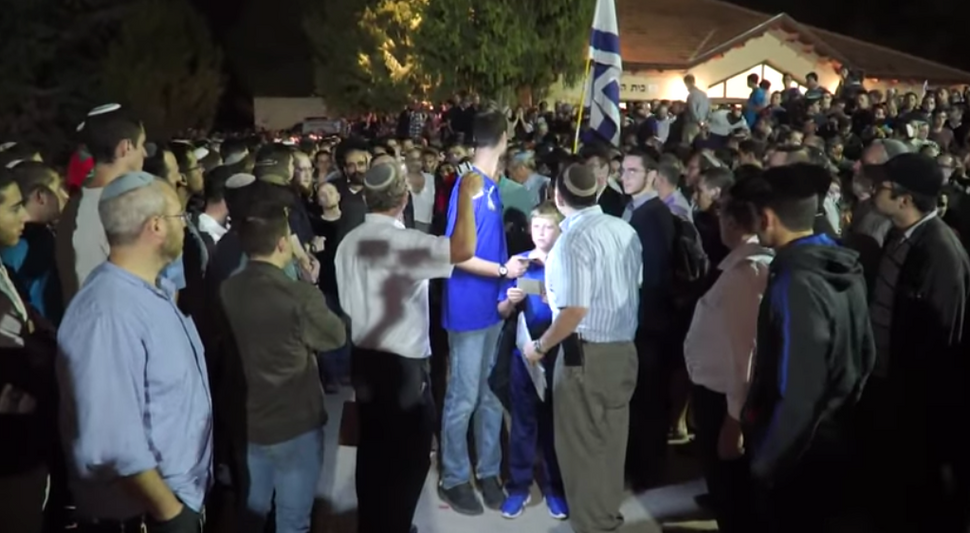 A still from a video of Fuld’s funeral. Image by YouTube/videoeden

Ari Fuld, a New York-born pro-Israel activist and defender of the Israeli settlement movement, was fatally stabbed by a Palestinian teenager at a shopping mall in the Israeli-occupied West Bank on Sunday morning, propelling grieving Americans desperate to mourn with his family onto planes bound for Israel.

Fuld, 45 and a father of four, was mourned all the more quickly and intensely because the timing of Yom Kippur, which starts Tuesday night, forces the shortening of the shivah mourning period, usually seven days. His funeral began just before midnight on Sunday, with thousands of people in attendance, and lasted nearly four hours. Many of the people giving eulogies attested to Fuld’s commitment to a Jewish presence in Israel.

“Zion cries and the land of Israel cries. Ari influenced thousands of people all over the world,” his father, Rabbi Yonah Fuld, said in a eulogy. “He gave his life to sanctify God, to sanctify the land. If you would have asked him, that’s the way he would have said he wanted to go.”

Fuld’s death has also been devastating to the Orthodox community in New York City and the people who grew up with him there. Yonah Fuld was the former principal of SAR Academy, a prominent Orthodox school in the heavily Jewish Riverdale section of the Bronx. Though the family moved to Jerusalem 25 years ago, Ari Fuld and two of his siblings attended SAR, and Fuld frequently returned to the United States to speak about Israel and the settlement movement.

Multiple memorial services have been held in the New York City area, including one organized by SAR Academy held late Sunday evening. A link to the livestream of Fuld’s funeral was shared widely on Facebook and other social media, and was viewed by tens of thousands of people people. A GoFundMe page created for Fuld’s family has raised nearly $370,000 since Sunday.

The fact that the funeral already occurred and that the mourning period is shorter than normal hasn’t stopped a flow of supporters of the family coming from New York to attend at least one evening of shivah. Rabbi Binyamin Krauss, the current principal of SAR, told the Forward he arrived Monday morning, on a plane with four other people coming to give their condolences to the Fuld family.

Ari Fuld’s father was my elementary school principal before making aliyah. The entire family has a deep love for and commitment to Israel, and his death is heartrending. Nobody deserves to be killed for simply living on a contested spot of land. Condolences to the Fuld family.

After immigrating to the Jewish state, Fuld’s family quickly integrated into Israeli life. Fuld served in the military before working in the country’s tech industry. His brother, Eitan, is the communications director of a member of the Israeli parliament, and another brother, Hillel, works in tech marketing. Rabbi Fuld and his wife Mary recently celebrated the 25th anniversary of their move to Israel.

Fuld was widely known in Israel for his pro-settlement advocacy, appearing frequently on Israeli news programs and posting videos of himself giving dispatches from places all over Israel. He was an implacable and polished debate opponent when it came to arguing the cause of settlers in the West Bank.

Even Fuld’s last moments were caught on camera, in security footage showing him giving chase and shooting at the teenager who stabbed him in the back at a mall in the settlement of Efrat. Fuld was taken to a nearby hospital, where he was pronounced dead.

Krauss said that the family is seen as a model of commitment to Israel and living out the common Orthodox ideal of aliyah — immigration to Israel.

A friend of Fuld’s since childhood, Avi Abelow, also Israeli-American, posted an emotional video on Facebook from the Western Wall in Jerusalem, describing his nearly 40-year friendship with Fuld and his grief at his death.

Krauss said that Monday’s shivah, which is taking place at Eitan Fuld’s apartment in Efrat, has been basically ongoing since 10 a.m., with over 100 people crammed into the small home at any given moment. Multiple members of the Knesset have stopped by, including the opposition leader Tzipi Livni. Prime Minister Benjamin Netanyahu visited the Jerusalem home of Yonah Fuld and his wife before the funeral Sunday.

As a family, we feel the tremendous hug and embrace from an entire nation and its leaders. And everyone agrees unanimously, Ari was a real life super hero. Bibi pleaded with us to put the incredible tails that are coming from all corners of the earth into a book.He is right. pic.twitter.com/hi2Low52Uq

“Shivah is a very meaningful, cathartic experience,” Krauss said. “It is very truncated, there’s no question about it. On the other hand, it’s so powerful when there’s so many people coming in such a short period of time.”

The teenage attacker, Khalil Yusef Ali Jabarin, was shot by Fuld and others and was detained and evacuated for treatment at a Jerusalem hospital.

The attack does not appear to have been targeted Fuld specifically: Haaretz reported that Jabarin told his family he was planning to commit an attack at the Tomb of the Patriarchs, a holy site near Hebron. Jabarin’s family also reportedly warned Israeli and Palestinian security forces of his plan to commit a terrorist attack in the minutes before the attack occurred.

The IDF has still mapped Jabarin’s home, near Hebron, for demolition, according to the Jerusalem Post — standard practice for the homes of terrorists who kill Israelis.

“I don’t know how I will go on without you,” Fuld’s widow, Miriam, said in her eulogy. “We were born 24 hours apart from one another. We didn’t know it would end like this. You fought for what you believed in. I promise to take care of the children. Your job is to look after us from above.”