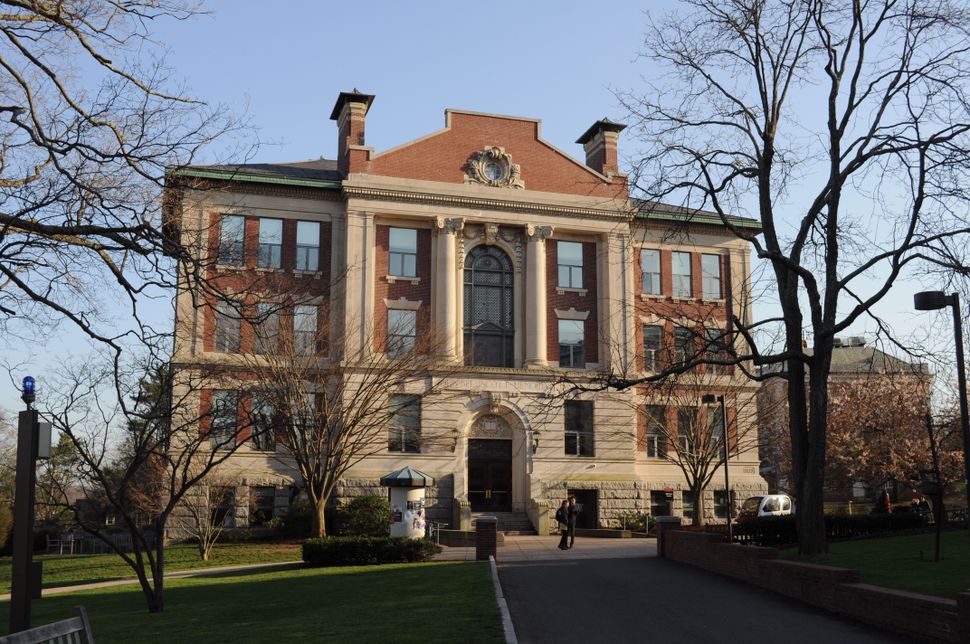 In the fall of 2016, roughly a dozen Jewish college students gathered at Wesleyan University in Middletown, Connecticut, for a weekend-long workshop.

Led by young organizers from a tiny progressive Jewish student group called Open Hillel, the students strategized and networked. They had no idea they were being watched by a major pro-Israel organization with a budget of millions of dollars a year and links to the Israeli government.

The monitoring of Open Hillel adds to an emerging picture of how the ICC has quietly used its $9 million budget, supplied by major Jewish donors like Lynn Schusterman, to discretely build a sophisticated political intelligence operation on U.S. campuses.

As the Forward has previously reported, the ICC has run a misleading anonymous digital campaign against a Palestinian-American poet and hired top-tier professional opposition researchers and political consultants to work against college student activists.

The monitoring of Open Hillel provides new evidence that the ICC has wielded its intelligence capabilities against young Jews.

Open Hillel, which began as a Jewish student protest of Hillel International’s ban on speakers who endorse the boycott, divestment, and sanctions movement, said in a statement that it was upset to learn that the ICC had monitored its meeting.

“We are disturbed, though not surprised, to hear that the Israel on Campus Coalition has decided to use its considerable resources to monitor and spy on students advocating for open, pluralistic, and inclusive Jewish communities,” the group said. Noting Hillel International’s close ties with the ICC, Open Hillel said that, based on the revelations, Hillel International should “cut ties with the Israel on Campus Coalition and condemn its practice of spying on and monitoring students.”

It’s not clear how the ICC monitored the Jewish students at Open Hillel. The ICC and its executive director, Jacob Baime, did not respond to multiple requests for comment. A former Open Hillel staff member who ran the 2016 workshop said that all of the attendees had an ongoing relationship with the organization, which makes it unlikely that the ICC sent a mole to infiltrate the gathering. But the ICC invests heavily on social media and data monitoring, with its own in-house research team and a “war room” at its D.C. headquarters with walls covered in computer screens; and that year had a $171,000 contract with a well-known Washington, D.C. opposition researcher.

“My guess would be that they were trying to be responsive to donor interest and concern about the Open Hillel movement,” said one Jewish communal professional, who asked not to be named to protect relationships.

Since its emergence in 2012, Open Hillel has been a source of concern for the Jewish establishment, which took it seriously. In 2015, Hillel International sent a legal threat to Swarthmore College, where the local Hillel had declared itself a member of the Open Hillel movement.

Still, despite the nervous attention paid to it, Open Hillel has remained a small effort. In 2016, it had a staff of two organizers; today it has only one. Only a small handful of campus Hillel organizations have officially joined the movement.

The event at Wesleyan that September was a weekend-long Open Hillel organizing workshop for around 15 college students. Registration cost $18. Rachel Sandalow-Ash, who at the time was one of Open Hillel’s two national organizers, said that the workshop was a way for the group’s far-flung student activists to get to know each other and to talk about their work.

At the workshop, the members discussed an Open Hillel campaign to demand that Hillel International stop accepting funds from an Israeli government-funded program called Mosaic United, which directed Israeli government money to Jewish student programing in the U.S.

The ICC has a close working relationship with the Israeli government, as the Forward reported in an article co-reported with ProPublica in mid-September. Leaders appear in an unaired hidden camera documentary saying that they “coordinate” or “communicate” with Israel’s Ministry of Strategic Affairs, an Israeli agency tasked with opposing the BDS movement worldwide.

It’s probable that the impetus for monitoring Open Hillel came from closer to home.

The Jewish communal professional said that the ICC was likely seeking to show donors that it was keeping on top of the Open Hillel issue by keeping an eye on their activities. “It’s good strategy, but secondly it speaks very much to what the donor class is interested in, which is being ahead of the curve,” the professional said.

“Spying on students or monitoring students in any capacity is upsetting,” said Eva Ackerman, Open Hillel’s current national organizer and it sole employee. “I guess I question why Hillel International is still partnering with this group, if it’s using these tactics.”

In mid-September, the Forward and ProPublica reported that the ICC had run misleading Facebook campaigns that were meant to appear as though they had been set up by local college students. The report also outlined how the ICC’s Baime had said in 2016 that his organization’s work was modeled on a military doctrine called counterinsurgency, which emphasizes intelligence gathering and so-called “offensive information operations” to discredit insurgent fighters.

Anonymous digital campaigns, like the one described in the mid-September story, seem to be a key part of the ICC’s strategy. As the Forward and Pro-Publica reported, Baime was recorded in an unaired hidden camera documentary saying: “With the anti-Israel people, what’s most effective, what we found at least in the last year, is you do the opposition research, put up some anonymous website, and then put up targeted Facebook ads.”

That sort of anonymous website has popped with increasing frequency amid campus controversies over Israel in recent months, at times to the dismay of local pro-Israel students and Hillel campus leaders. By design, it’s often difficult to track exactly who is behind each of the anonymous sites. In August, the Forward reported on an incident last spring at George Washington University, where five or six anonymous websites interceded in a local campus controversy. At least two of the sites appear to have been set up by the ICC.

“It made many of our pro-Israel students walk away,” the GW Hillel executive director, Adena Kirstein, said of the anonymous sites in an interview with the Forward this summer. “Even though we were very clear we had nothing to do with any of these sites, and I do not know who created any of these methods, they didn’t want to risk being affiliated with a version of pro-Israel that looks like that.”

Do you have information about this story or the Israel on Campus Coalition? Contact Josh Nathan-Kazis at [email protected] or on Twitter, @joshnathankazis