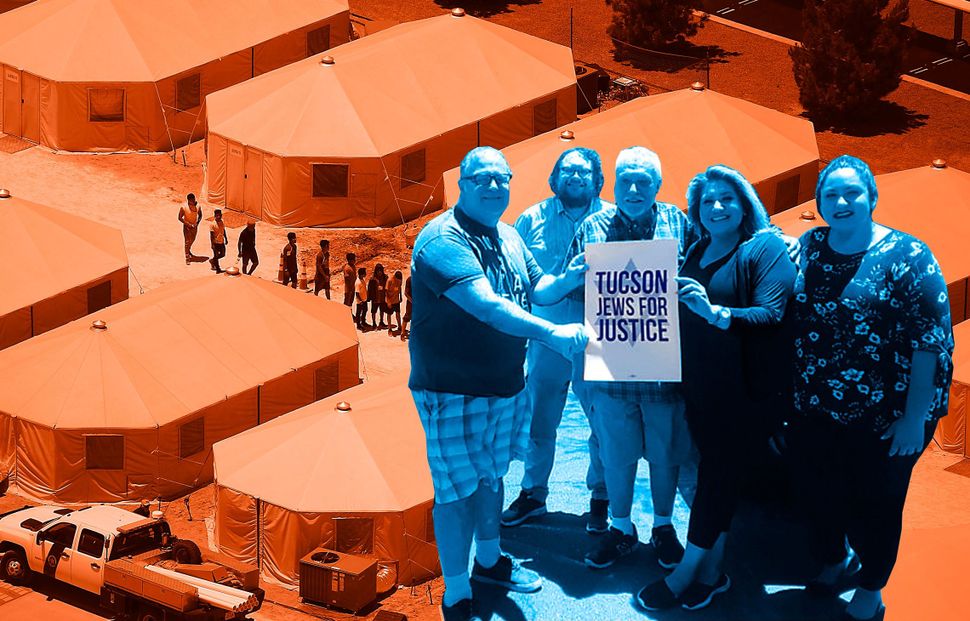 This article has been updated to add details in paragraphs four through nine about pro-Palestinian activists’ affiliation with the Tucson chapter of Jewish Voice for Peace.

Tucson Jews for Justice is one of many Jewish “resistance” groups that have emerged nationwide to focus on domestic policy in the wake of President Trump’s election.

The group has rallied against the Muslim travel ban and Trump’s family separation policy. They’ve helped organize an event in support of the press and the First Amendment. They’ve even driven to Mexico to directly provide more than $1,400 worth of supplies to asylum seekers stuck on the other side of the border.

But that isn’t enough for many of their allies on the left. Members of the group say that they’ve been bullied and berated by other local activists at three events in the last four months because they refuse to condemn Israel.

Three members told the Forward that several activists accosted their delegation at a June rally against President Trump’s travel ban. They said two of those activists were holding signs for Jewish Voice for Peace, a left-wing group that is critical of Israel’s policies towards Palestinians.

Those holding the signs and others around them were shouting “‘How can you be here,’ and just yelling at us, yelling at me and my daughter,” said Teri Kagi, a member of Tucson Jews for Justice. “I said, ‘How can you yell at a kid? We’re here to help you.’”

Kagi and other Jews for Justice marchers identified the two people holding the signs as Mohyeddin Abdulaziz, a leader of the local chapter of the American-Arab Anti-Discrimination Committee, and Lena Rothman.

Jews for Justice associates Rothman with JVP because she used to be a member and says she still is. JVP, however, says she is not, and is no longer paying her dues.

An email requesting comment sent to Abdulaziz via the Tucson AAADC was not returned.

Abdulaziz was described by the local JVP chapter as a member in 2016. The group says he came to some of their events and meetings in the past, but that they don’t have a formal membership policy.

“We as a chapter don’t know the nature or extent of interactions individuals may have had with Jews for Justice, and can’t speak to any individuals’ actions at non-JVP events,” a JVP-Tucson spokesperson said last week.

Last year, three Jewish women were expelled from the Chicago Dyke March for waving flags with Stars of David that others thought were Israeli flags.

And this year, Jewish supporters of the Women’s March were angered and said they no longer felt welcome due to organization leaders’ continued anti-Israel statements and refusal to condemn the anti-Semitic preacher Louis Farrakhan.

Tony Zinman, a juvenile public defender and the co-founder of Jews for Justice, told the Forward that the group was formed after he noticed that at local rallies against Trump policies, there was not an institutional Jewish presence even though some individual Jews were there.

He co-founded the group with Alma Hernandez, an activist and state House of Representatives candidate who is likely in November to become the first Hispanic Jewish woman elected to American public office.

Zinman says the group purposely does not take a stand on Middle East issues.

“There are other groups in town that are for Israel; there is Jewish Voice for Peace and their thing is anti-Israel,” he said. “Our group only has a domestic focus. We want to keep it there.”

Since its founding in March of this year, Zinman said, the group has grown to more than 200 supporters on Facebook and around 30 people who show up consistently to its events, holding up placards with their group name and the Star of David.

“Progressive Jews have a right to be out there,” he added. “We don’t have to be anti-Israel to participate, and that’s what these people want.”

Marty Johnson, another Jews for Justice member said that his group was “viciously attacked, screamed at” during the travel ban rally. “At one point I was speaking to a live news reporter, and Mohyeddin was screaming at me and Lena Rothman was screaming at me right off-camera.”

“First of all, I did not scream at them,” Rothman wrote in a Facebook message. “Second of all, there were only 2 members there and I asked them questions.”

“My problem with [Tucson Jews For Justice] is that they claim to be neutral on Israel when they are not,” she added. “They are dishonest and obviously, I didn’t even know until now, that they lie because they told lies about me.”

Zinman said the abuse they encountered “got even worse” at another rally a few days later against Trump’s family separation policy, where he says he was again screamed at by both Abdulaziz and Isabel Garcia, a prominent immigrant rights advocate who was once named “Best Local Activist” by Tucson Weekly. A message left for Garcia via the not-for-profit she runs was not returned.

Issues also arose in the past month when the Tucson chapter of the progressive grassroots group Indivisible asked Zinman to help organize an event, scheduled for last Monday, about the importance of journalism and the First Amendment.

Zinman estimated that he did 90% of the work planning the event, so he asked in return that Jews for Justice be credited as a co-sponsor. But, he said, the co-sponsorship drew the ire of pro-Palestinian activists who called on Jews for Justice to denounce Israel and led a campaign calling on Indivisible to disaffiliate from them if they did not do so.

“It is a major contradiction and a divisive chauvinistic one if [Jews for Justice’s] position is not for total national liberation for the oppressed Palestinians,” one person wrote on Indivisible’s Facebook page, adding, “While the journalists might be questioned on Monday night, it is Indivisible and Jews for Justice who must now be questioned as to their position on Palestinian liberation and Zionist genocide.”

“If JVP and Mohyeddin want to have an anti-Israel rally, I wouldn’t go protest it,” Zinman said. “But it’s a completely separate issue. The domestic issues we’re dealing with and the Middle East issues are completely separate, and I don’t think it’s right to intertwine them.”

Kagi and her daughter eventually went through with their conversions. But she said she had to process what had happened before she went to the mikveh.

“It did make me feel, I wouldn’t say second thoughts, but I had to really think hard about [how] this is something that you’re going to have to deal with, and you’re joining a people that a lot of people really hate,” she said.

But she said she would “absolutely” attend another event as an open and proud Jew.