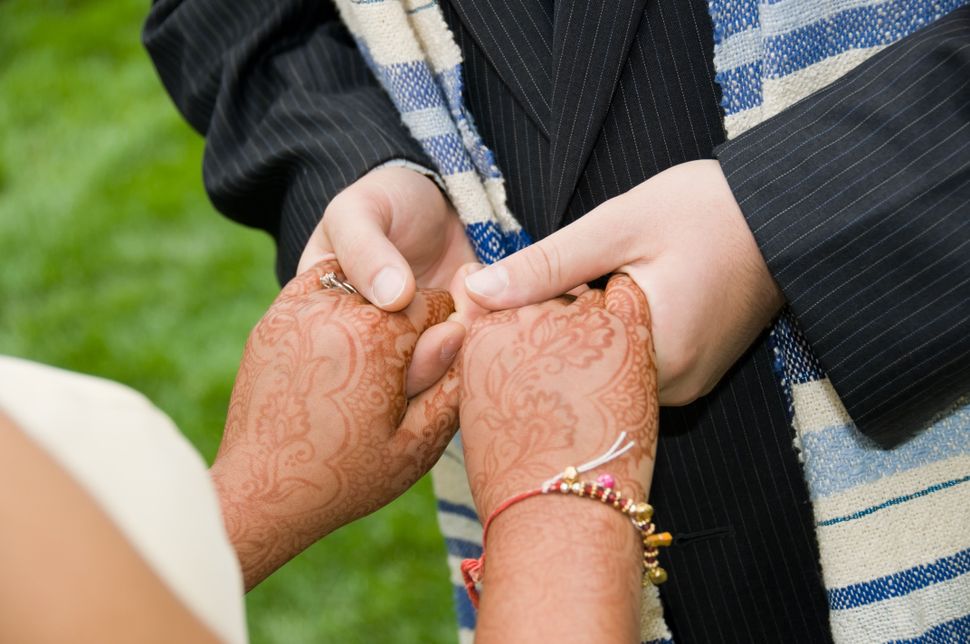 The Conservative movement’s central authority on Jewish law has announced that rabbis can attend weddings between Jews and non-Jews.

The decision overturns over four decades of assumptions that the movement’s rabbis could be kicked out simply for being a guest at an interfaith wedding. Over the years, rabbis skipped out on countless weddings of close friends and family members lest they get found out, and end up sacrificing their careers.

“If it was found out that we even attended an intermarriage, meaning standing in the back of the venue, wearing a Groucho Marx disguise, we would be kicked out of the Rabbinical Assembly,” Rabbi Jason Miller told the Forward in February. Miller did not attend his first cousin’s interfaith wedding, which he said caused a “significant fissure in our relationship.”

The decision also shifts the movement’s internal struggle over intermarriage — one of the the banner issues for Conservative Judaism — perceptibly closer to acceptance.

Conservative Judaism is a movement that tries to blend modern life with adherence to halakha, or Jewish law. The movement’s central governing bodies have at times reinterpreted halakha in light of modern needs, such as allowing people to drive to synagogue on the Sabbath. Nearly a fifth of American Jews are Conservative, according to the Pew Research Center’s Portrait of American Jewry.

While Conservative rabbis are banned from officiating interfaith weddings, earlier this year a small cohort of rabbis challenged the movement’s leadership largely over concerns that the movement will overturn that ban.

In January, the Forward reported that the Rabbinical Assembly, the body that represents the Conservative movement’s rabbis, reaffirmed its ban on rabbis performing interfaith wedding ceremonies. That announcement was the result of deliberations by a secretly convened “Blue Ribbon” commission. The commission was formed largely in response to a California rabbi’s assertion, published in an article the spring of 2017, that the movement’s ban on rabbis officiating interfaith weddings and, by extension, attending them, had never been formally adopted.

As part of that announcement, the RA asked its Committee on Jewish Laws and Standards to look into the question of whether the movement’s rabbis could attend interfaith weddings without sanction or fear of expulsion. The CJLS has returned its answer: Yes, they can.

Part of this latest ruling is about the age-old question of officiation. The CJLS said Friday, following the rules it affirmed earlier this year, that Conservative rabbis “may officiate at weddings only if both parties are Jewish.” Officiation, in this scenario, means “signing documents” like the ketubah, the Jewish marriage contract, or “verbal participation of any kind.”

“It means you can’t go to the front of the kehilah, [community] under the chuppah, [wedding canopy] get everyone’s attention and say, ‘I just want to say how happy I am for you guys,’” said Steve Rabinowitz, a media representative for the RA. “When one of the couple breaks a glass, and everyone yells, ‘Mazel tov,’ can this clergyperson also yell ‘Mazel tov’? Of course.”

The most significant part — and the part that overturns decades of assumptions for many Conservative rabbis — is this line: “Attendance as a guest at a wedding where only one party is Jewish is not included in this Standard of Religious Practice.” That means that the movement has no ruling either against or in favor of its rabbis being guests at interfaith weddings.

It comes down to the difference between the two things the CJLS is tasked with deciding on: laws, and standards. The Conservative movement frequently has rabbis study Jewish law in light of certain questions, like whether you’re allowed to drive to synagogue on the Sabbath (you are, technically) or how exactly blind people are allowed to read from the Torah on the Sabbath. The reports they compile are the Jewish equivalent of legal briefs, and they’re called teshuvot. They are not binding for Conservative rabbis.

“Rabbis tend to take teshuvot very seriously, because one of their colleagues has studied the issue at length,” said Rabbi Elliot Dorff, chairman of the CJLS. “But ultimately rabbis may choose to ignore them and rule otherwise on any of the teshuvot that we have.”

Standards, on the other hand, are binding. If you’re a Conservative rabbi, you can get expelled from the movement’s Rabbinical Assembly for violating them, Dorff said. One relates to re-marrying a Jew who was previously married in a Jewish ceremony; another declares that Jews are people with Jewish mothers or people who converted according to Jewish law; and one forbids officiating a wedding between a Jew and a non-Jew.

The confusion centered around that last standard, passed unanimously by the CJLS in 1971 and then again in 1972, Dorff said. (Although not, according to the journal article on the subject, ever formally adopted by the RA.) It did not specify what “officiation” meant, nor did it say whether or not it would be a violation of the standard to attend an interfaith wedding as a guest.

But enough rabbis were sufficiently convinced that officiation included even attendance that the norm developed — and then, over the decades solidified — of not going to interfaith weddings at all.

In January of this year, the Rabbinical Assembly admitted it had never enforced the “ban,” leading to a small backlash from Conservative rabbis.

“We’re talking about people’s livelihood,” said Rabbi Adina Lewittes, who left the RA so that she could perform interfaith weddings. “Their ability to make a living is hanging in the balance of whether or not an organization is going to make a clear statement, and live that statement, of what’s expected of them.”

In an email, Rabbi Debra Newman Kamin, the president of the RA, said that the CJLS is not currently reviewing any other questions related to interfaith marriage. She did not answer an emailed question about whether the RA planned to formally apologize to rabbis who skipped relatives’ and friends’ interfaith weddings for fear of being expelled.

“This standard continues to affirm our belief that the narratives, symbols, and rituals of the Jewish wedding ceremony we represent are intended for Jewish couples who can authentically accept them as religiously meaningful,” the movement’s Committee on Jewish Laws and Standards said in its statement.