Anger Over Pittsburgh Bloodbath — And Trump — Could Tip Midterms To Democrats 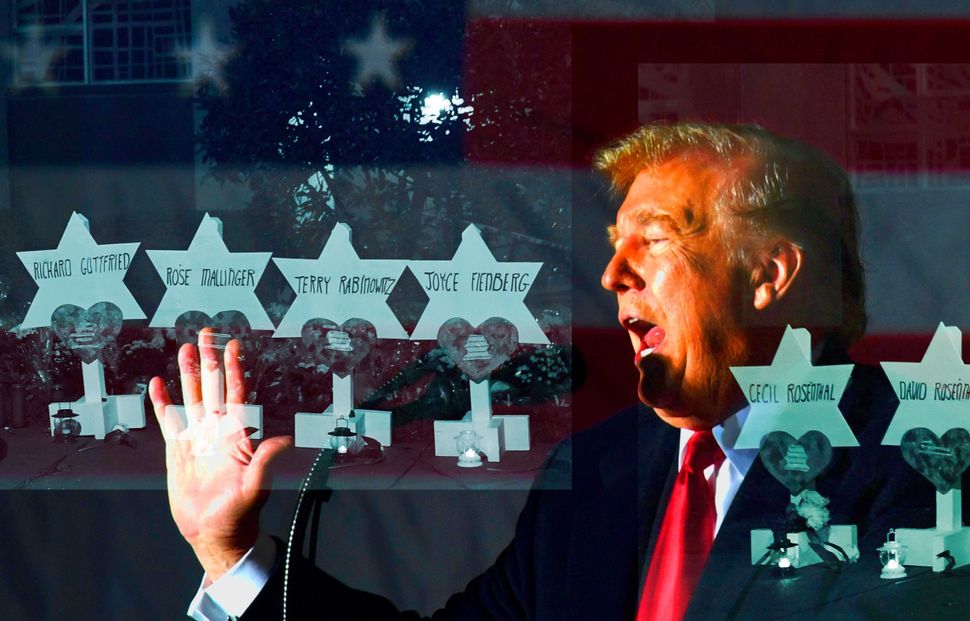 Just days after the deadliest anti-Semitic attack in American history, a political war is brewing over whether President Trump is in part responsible for the rampage in Pittsburgh — and whether voters will hold him accountable at the polls next Tuesday.

Progressives and Jewish Democratics insist that Trump created an atmosphere that led to the massacre by stoking hatred among his right-wing supporters against political opponents and “globalists.”

They hope to make the midterm elections in large part a referendum on Trump, and they believe the synagogue shootings are likely to turn voters against Republicans.

“Is this seen in the context of rising hate since Trump has been in?” asked Raphael Sonenshein of the Pat Brown Institute at California State University at Los Angeles. “If that sticks to him, I think it’s going to be very damaging to Republicans.”

Trump and his American and Israeli allies counter that the attack stems from historical anti-Semitism. They question whether it will have any impact on the high-stakes election November 6.

“Anti-Semitism didn’t start on January 2017, and it won’t end when President Trump’s term of office is up,” said Matt Brooks of the Republican Jewish Coalition.

The stakes could scarcely be higher as Americans ask if the Pittsburgh shootings — along with the pipe bomb attacks by a right-wing extremist on prominent liberals and a racist white gunman’s attack on a grocery store — might wind up being a sort of black swan event or an October surprise that could swing the midterms.

Democrats lead the battle for control of the House of Representatives, but have little chance of flipping the Republican-held Senate. While Jewish voters lean heavily Democratic, the debate over the meaning of the massacre is playing out on a national stage, watched closely by undecided voters in suburbs and rural areas far from any Jewish communities.

How Trump handles the aftermath of the shootings could have an impact on such swing districts, where issues like immigration and the rising trend of white nationalism have already played a major role. “If that conversation continues until Election Day, I think the president is going to try real hard to change the subject,” Sonenshein said.

Hank Sheinkopf, a conservative Democratic strategist, said that the recent wave of political violence could help boost turnout for Democrats, who are already energized by two years of non-stop outrage over Trump.

“The sense that things are out of control, that violence [is] too overwhelming, and we’re having incident over incident” would boost turnout, Sheinkopf predicted. “They see things as out of control; they see a need for change.”

Jefrey Pollock, a Democratic pollster, said the Pittsburgh massacre, and other news events, are pushing unusually high turnout, which in and of itself benefits Democrats, who usually participate less in non-presidential elections.

“Everything suggests that we are a country that’s on edge, and I think that’s going to translate into participation,” Pollock told Politico. “But the reality is that many voters in this country hold Donald Trump responsible for the divisive rhetoric these days.”

The fight over the political impact of the Pittsburgh massacre comes after Jewish leaders have rung alarm bells for years over Trump’s apparent nods to anti-Semitic conspiracy theories.

Robert Bowers, the man accused of storming a Pittsburgh synagogue on Saturday morning, killing 11 Jewish worshippers, didn’t support Trump. But he spewed hatred at Jews for welcoming refugees and immigrants into the U.S.

Trump and his administration have stoked fears of refugees, focusing intensively in recent weeks on a group of migrants said to be heading towards the southern U.S. border.

Progressive activists make no secret of their hope to take advantage of the bloodshed to expose what they call the extremism of the Trump White House.

“Right now, we have people in elected office who have contributed to, and in many ways exacerbated and emboldened, the hatred and bigotry that created an environment that led to the deaths of 11 people,” said Stosh Cotler, CEO of Bend the Arc, a progressive Jewish advocacy group.

Cotler’s organization circulated on Monday a letter to President Trump, signed by a group of its members based in Pittsburgh, saying he wasn’t welcome in the city in the wake of the massacre. At least 34,000 signed it as of Monday evening.

Trump is coming anyway. In a tweet on Monday morning, the president seemed to blame the news media for the Pittsburgh massacre. His press secretary, Sarah Sanders, struck a different note on Monday afternoon, saying Trump would travel to Pittsburgh and calling the massacre an act of “evil,” and anti-Semitism a “plague to humanity.”

She reiterated some of the arguments Trump briefly made over the weekend after the shooting. He then pivoted to political point-scoring, infuriating many who said he should have stayed on a more statesmanlike theme.

Jewish Republicans, meanwhile, argued that Jewish Democrats and progressives were politicizing the tragedy.

“We need to be about healing and mourning and bringing people together, and not trying to score partisan political points at the expense of these folks who were murdered,” said Brooks, responding to the Bend the Arc petition. “We need as a community and a country to have a broader conversation about how we move forward.”

Israeli officials echoed Brooks’s theme. In a widely-circulated clip of a Monday morning spot on MSNBC, Israeli ambassador Ron Dermer said that the attack was the result of age-old anti-Semitic prejudices.

Of course, under virtually any other president, a major tragedy like the Pittsburgh shooting would be considered a major boost for the commander-in-chief, who would get a platform to show off his unifying powers to heal a wounded nation.

But, perhaps tellingly, neither the Republicans nor Dermer tried to argue that the shooting might help Trump win over voters.

Anger Over Pittsburgh Bloodbath — And Trump — Could Tip Midterms To Democrats