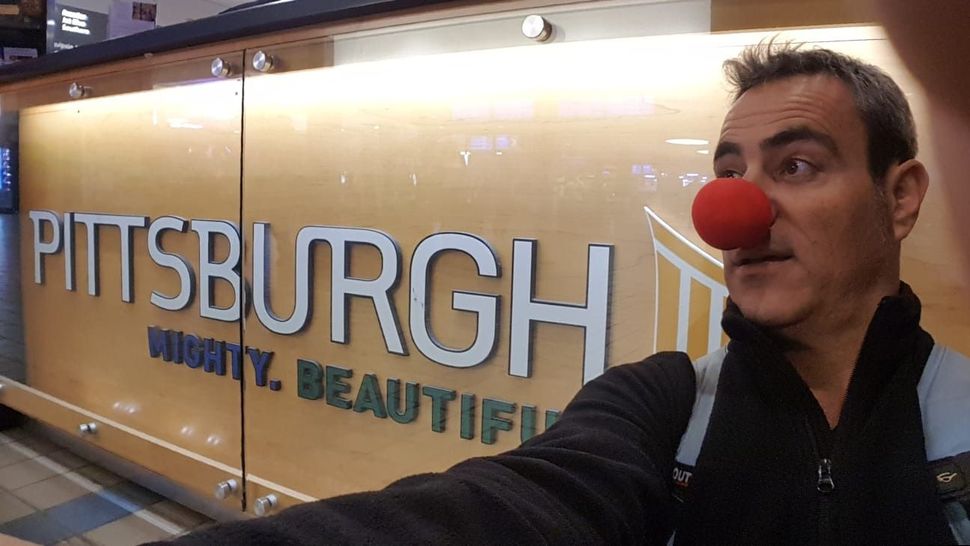 Nimrod Eisenberg traveled from Israel to Pittsburgh following the mass shooting at a synagogue. Image by Dream Doctors

Now he’s in the Squirrel Hill neighborhood of Pittsburgh along with other Israeli trauma experts brought in to help comfort community members shaken up by the shooting at Tree of Life Congregation.

“Clowning is a very simple tool… a non-threatening way to connect,” Eisenberg says. “A clown is a kind stranger.”

Eisenberg had just emerged from a professional training session at the Children’s Institute, a center for children with special needs across the street from Tree of Life. His group and trauma experts from United Hatzalah (the Israeli EMT service,) have been conducting trainings for medical and other professionals, and comforting community members since Sunday. The Jewish state’s Ministry of Diaspora Affairs sent them.

Miriam Ballin of United Hatzalah said that their work started on their flight, which landed on Sunday, the day the names of the victims were released. The team was sitting next to a couple from Pittsburgh who had been traveling in Israel. “They said, ‘We don’t want to even turn our phones on, because we’re too scared to see which of our friends are gone,’” Ballin recounted. “That was where our work started, right there on the tarmac.”

Jewish Family and Community Services of Pittsburgh helped set up an emergency response center at the Jewish Community Center soon after the shooting happened on Saturday. JFCS spokeswoman Rebecca Rumson said that every therapist and counselor there was wearing a sticker with their name and the word “helper.” Fred Rogers, the deceased children’s TV host who lived in Squirrel Hill, advised children to “look for the helpers” in times of crisis, a message that has been widely shared after disasters in recent years, including this one, the most recent.

JFCS and its partners are providing a range of services: Drop-in hours at the JCC. Massage therapy. Acupuncture. Reiki. Talking to students and guidance counselors at the Jewish day schools and the public school system. Assistance at local clinics, senior centers, the local Hillel, the public library system. They are also comforting the comforters, helping rabbis who are struggling sometimes to support their congregants.

“The scope of what ‘community’ means doesn’t have a boundary right now,” Remson said.

JFCS didn’t have a specific plan for such an unexpected traumatic event, he said, but because the organization has been in existence for 81 years, and has helped the community through smaller-scale challenges, they were able to mobilize their staff to mount this response.

Israeli Jews have much more experience dealing with trauma than their American counterparts, said Ballin of Hatzalah.

“People in Israel are prepared for trauma – the next day, they go back to work,” she said. “Here, people are not prepared – it adds to the traumatic reaction.”

But, she said, the tightly-knit Squirrel Hill community has found strength through supporting each other. “There’s unity like I’ve never seen anywhere,” she said.

Eisenberg, the medical clown, pointed out that Jewish humor can also help with coping.

“A Jewish joke is a sad story with a funny ending,” he said. “It’s in our background, as Jews, to smile and laugh together in difficult circumstances.”

Jews were not the only subject of the gunman’s hatred. He allegedly targeted Tree of Life because of its support of the Jewish refugee agency HIAS.

JFCS is also Pittsburgh’s largest refugee resettlement agency, Remson said. When JFCS checked in on the refugees and immigrants it works with after the attacks, they were heartened by what they heard.

“We reached out to them because we were worried that they were scared, that they may have felt like they were a target because the shooter had indicated a motive by hatred of the refugee community,” she said. “They have fled persecution, they have come to the United States because they’ve been persecuted for religious, political, ethnic, national affiliation. Their response was, ‘How can we be here for you?’ And I think that’s telling on how well they’ve become a fabric of the Pittsburgh community. Because that’s what Pittsburghers do, we’re there for each other.”

JFCS is collecting letters from around the world to share with bereaved families. Click here to send a message.