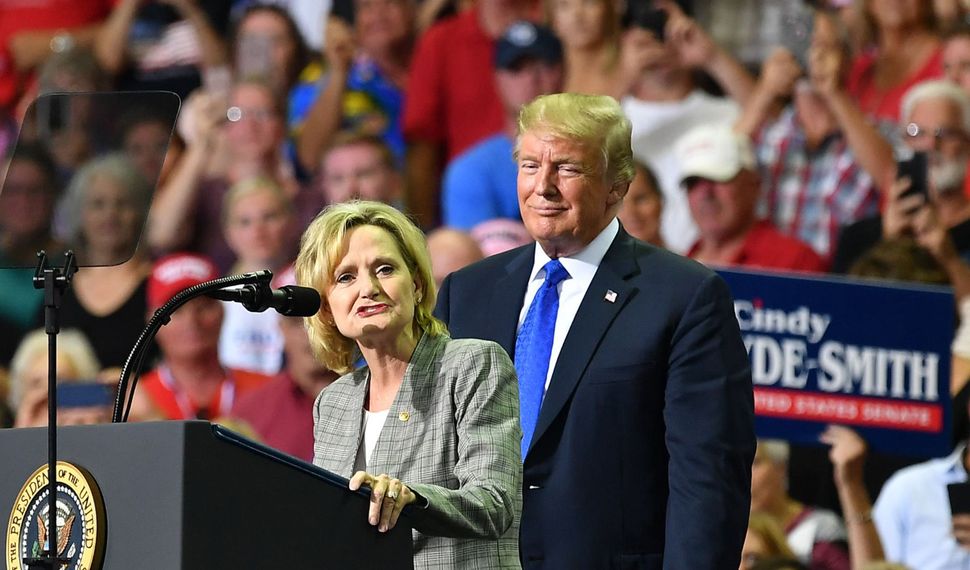 There are only around 1,500 Jews in the entire state of Mississippi. But with the state’s runoff Senate race expected to be closer than any in a generation, the community may get the chance to play a decisive role when the votes are cast on Tuesday.

The choices: Democratic former Rep. Mike Espy, who would be the first black senator from the state since Reconstruction, or incumbent Republican Sen. Cindy Hyde-Smith, who has attracted nationwide attention for racially insensitive comments and ties to segregationist and pro-Confederate institutions.

An upset Democratic victory would leave Republicans with a narrow 52-48 seat majority in the Senate.

“Most of us [in our community] have liberal and Democratic leanings. To my knowledge, I would say 75-80% Democratic,” said Linda Levy, the immediate past president of Temple B’nai Israel of Tupelo. That number squares with the Jewish community’s 79%-17% Democratic split reported in CNN’s election night exit poll.

“Those whom I know, that we have discussed it, have very strong feelings against her,” Levy said.

But Brian Rivkin, the immediate past president of Temple B’nai Israel of Hattiesburg, said that his community is split about 50%-50% between Republicans and Democrats.

He predicted those who are Republicans will vote for Hyde-Smith, even if she is not personally popular.

“I can’t find anyone who likes her per se,” Rivkin told the Forward. “But because we’re in a deeply red state…they will support her even though they don’t like her.”

The run-off is taking place because neither candidate won 50% of the vote on election day earlier this month.

Hyde-Smith, a former Democratic state senator who who switched parties in 2010 before being elected as state agriculture commissioner, was appointed to the U.S. Senate in March after incumbent Sen. Thad Cochran retired due to ill health.

During an event with a local cattle rancher on Nov. 18, Hyde-Smith praised him by saying, “If he invited me to a public hanging, I’d be on the front row.” The statement was shocking to many due to Mississippi’s history of racist violence; it led the nation in lynchings between 1877 and 1950, the Jackson Free Press reported.

Espy called her comments “reprehensible,” and the president of the NAACP, Derrick Johnson, said her words were “sick.”

“To envision this brutal and degenerate type of frame during a time when Black people, Jewish people and immigrants are still being targeted for violence by White nationalists and racists is hurtful and harmful,” Johnson said in a statement.

Hyde-Smith initially called the outrage “ridiculous” but later apologized for the remark.

Subsequent reporting revealed that Hyde-Smith had pushed as a state legislator to name a highway after Confederate President Jefferson Davis; posed for a photo in a Confederate soldier’s hat; and publicly said it would be a “great idea” to make it harder for liberal college students to vote.

Most recently, it was revealed that she as a high school student attended a so-called “segregation academy” set up so students could avoid the newly-integrated public schools — and then sent her daughter to that same school.

Jewish Mississippians reached by the Forward were disgusted with Hyde-Smith’s “public hanging” comment.

“I know there has been some general outrage among the Temple and among people in Mississippi due to her comment about attending a lynching,” Rivkin said. “Some people have really turned against her.”

Barbara Keller, an instructor at the University of Southern Mississippi, said she had seen some people on Facebook defending Hyde-Smith by parsing the differences between “lynchings” and “public hangings.”

The president of Mississippi State University Hillel, Tyler Daniel, said that there were strong connections between the Jewish and African-American communities in Jackson, the state’s biggest city and where he grew up. Daniel, who stressed he was speaking in a personal capacity, pointed out that his synagogue was firebombed in 1967 due to the congregation’s support for civil rights.

“Jewish people across the South are very keen on elements that unify us as a people as a culture, as one Southern people,” he said. “Comments about public hanging are obviously not inductive for that type of environment.”

Daniel said those connections would likely lead Jews to side with Espy as an African-American trailblazer. He said he would vote for Espy because of the ex-lawmaker’s accessibility to the state’s tiny Jewish community. “He’s gone out of his way to attend a synagogue service,” Daniel said. “That’s not something many other candidates take the time to do.”

As a congressman in the 1990s, Espy also co-chaired the Committee of Blacks and Jews to Aid Ethiopia, a coalition that worked to alleviate the famine there.

Hyde-Smith, unlike Espy, mentions support for Israel in the “Issues” section of her website. “Cindy supports President Trump’s decision to locate the American embassy in Jerusalem and will work to strengthen U.S.-Israeli national security, economic and cultural interests,” it reads.

On the other hand, Hyde-Smith has also repeatedly criticized Espy for taking donations from George Soros, the Jewish financier and megadonor who has been the subject of anti-Semitic conspiracy theories.

The polling website FiveThirtyEight is giving Hyde-Smith around a 70% chance to win, some are predicting that Espy can succeed by turning out the African-American vote and riding the backlash against Hyde-Smith’s controversial comments by inspiring white liberals and hoping dejected conservatives flip or stay home — the same way Democrat Doug Jones defeated Roy Moore in neighboring Alabama last year.

Levy was asked by the Forward whether she thought Espy could actually win.

“From your mouth to God’s ears,” she said. “Halevai it should happen. I’m very hopeful, but I’d be very surprised.”