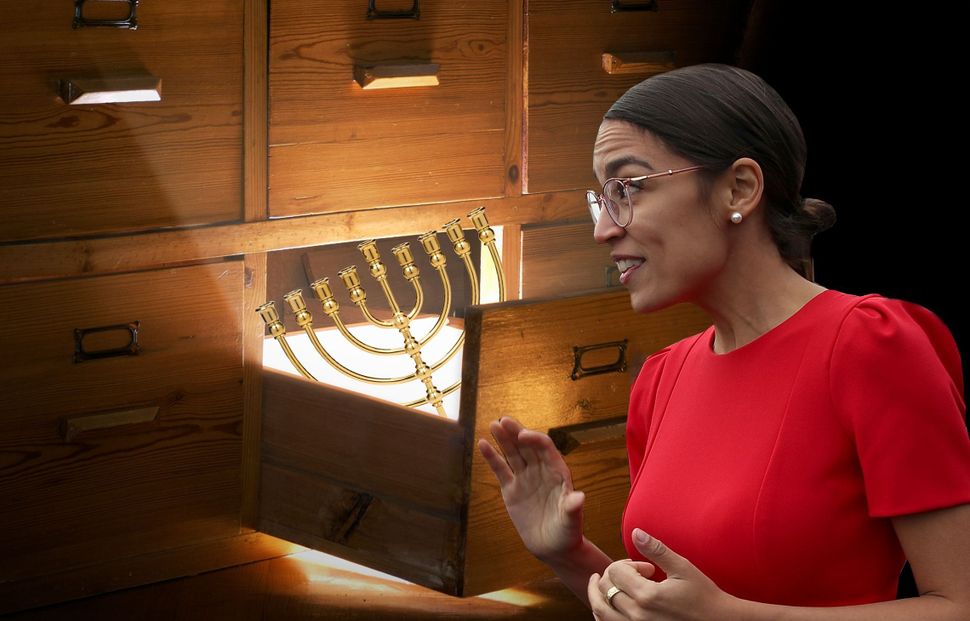 These are the terms used for Jews, mainly of Spanish descent, who were forced to convert to Catholicism or die during the period of Spain’s Inquisition. While many Sephardic Jews did convert, some continued to practice their Judaism in secret.

Now, this 500-year history of hidden Jewish lineage has been invoked by an unlikely source: the firebrand U.S. Rep.-elect Alexandria Ocasio-Cortez, who is the youngest woman ever elected to Congress. At a menorah lighting on Sunday, she told a room of supporters that her family has Sephardic heritage.

Ocasio-Cortez’s revelation triggered a passionate debate among Jews, genealogists and historians about the veracity of claims of Sephardic ancestry, and their deeper meaning. Some saw her announcement as a cynical political ploy along the lines of Elizabeth Warren’s claims of Native American ancestry. Others say that Judaism should be a big enough tent to welcome Jew-ish people like Ocasio-Cortez. But some experts say that even if Ocasio-Cortez says she has Jewish ancestry, there is likely no evidence — either documentation or family traditions — to support it.

“All of this talk about lighting candles and sweeping the floors, it means nothing,” said Judith Neulander, a lecturer on Jewish studies and folklore at Case Western Reserve University. “If you go back in history and look at these things, it’s sad, but nothing holds up.”

At Hanukkah event with @JFREJNYC in an moving speech, @Ocasio2018 shares that her family were Sephardic Jews who fled to Puerto Rico. “So many of our destinies are tied beyond our understanding” pic.twitter.com/68bjuCFnDD

Exploring — and publicly discussing — one’s ancestry is trendy these days. The DNA testing company 23andMe has more than 5 million customers; Ancestry.com, which matches DNA tests with genealogical trees, has more than 3 million customers. Dozens of athletes, politicians and cultural figures have gone on the PBS show Finding Your Roots to do exactly that. Warren attracted significant media attention by saying she has Native American ancestry, and doing a DNA test to try to prove it. Over the summer, a Latina New York state politician, Julia Salazar, became embroiled in controversy when her own claims of Sephardic ancestry were challenged.

Some ancestries are more coveted than others. Neulander calls Sephardic ancestry a “prestige lineage,” one that many people claim because it carries exotic, intellectual or otherwise special connotations. The fact that we think of it that way may have to do with Jewish elitism itself.

Sephardic Judaism, which flourished between the 9th and 12th centuries in Islamic-occupied Spain, is widely considered by most Jews to have been full of scholars, intellectuals and grammarians. But it was a medieval community with high rates of poverty and illiteracy like any other, says John Efron, a professor of Jewish history at the University of California-Berkeley. In the 19th century, he explained, German Jews created the myth that Sephardic Jews were uniquely smart and secular, as a way to differentiate their own intellectual culture from Polish Jews. Efron says this German-made myth is part of the reason Sephardic ancestry is seen as so desirable.

“No non-Jewish member of Congress is going to say, ‘I’m descended from early-Modern Polish Jewry,” Efron said. “Everyone wants to claim this ancestry. [Ocasio-Cortez’s] claim is a very old story.”

“It is common for people to bring it up,” Wassner said. “People play a lot with, ‘I wonder if.’ The knowledge that there were secret Jews that colonized the Americas… is a reality.”

Wassner said that certain names, like León, Coehlo, Perreira and Miranda can denote Sephardic ancestry. Some people point to family traditions that seem to dovetail with Jewish practices: cleaning the house vigorously around Passover; not eating pork; and celebrating Esther, the hero of the Purim story, as a saint around the time of Purim on the calendar. It has only been fairly recently, however, Wassner said, that people have connected these names and traditions to Jewish ancestry.

“I don’t doubt that there are a number of converso Jews who kept these traditions, if not knowledge that they came from Judaism,” Wassner said. “But it’s up to those people to then claim those identities in a meaningful way.”

‘My dog ate my homework’

In some genealogical circles, however, the casual claim of Sephardic heritage has become infamous. In the Facebook group The Sephardic Diaspora, while some members lauded Ocasio-Cortez’s announcement, others wondered where the proof was, and whether or not the announcement was a political stunt.

“Almost everyone cannot prove it, and people who [claim that] can prove it will say, ‘My dog ate my homework,’” said E. Randol Schoenberg, an attorney and genealogist who sits on the board of JewishGen, an online Jewish genealogical database, and is a curator for the genealogy social networking site Geni. Schoenberg started a thread about Ocasio-Cortez’s ancestry claim on The Sephardic Diaspora. (He also litigated the trial and arbitration that returned the famed Klimt portrait of Adele Blochbauer to her heirs.)

Many of the problems come down to documentation. While there are archives for the Inquisition, Schoenberg says that it is close to impossible to draw a straight line back 500 years in genealogy — especially for the descendants of converts. People who claim to have done this, he says, often make many assumptions that, for example, the “Julio Gomez” they find on a ship record is the same Julio Gomez they believe to be their great-great-grandfather.

Neulander, who studied myths of converso ancestry among New Mexicans, said that in many cases, purportedly converso-descended people learned about their ancestry from suspect sources, such as academics with weak reputations among their peers.

“They’re not ever part of the family history,” Neulander said of supposedly “converso” traditions like lighting candles, saying that the traditions often don’t go back beyond a few generations.

There are some accounts of people purporting to trace their roots to converted Spanish roots. The New York Times reporter Doreen Carvajal wrote about tracing her ancestry to a wealthy Spanish man in her book “The Forgetting River.”

What complicates this picture is the math. Any person alive today may have more than a million potential ancestors alive around the time of the expulsion of Spain’s Jews, in 1492.

“It’s likely that every Latin American has one ancestor who is Jewish. That’s the math of it,” Schoenberg said. “But what is also true is that there is no trace of that.”

It’s unclear if Ocasio-Cortez will provide any proof of her ancestry. She has said only that her family has discovered that “generations ago, my family consisted of Sephardic Jews.” Corben Trent, a spokesman for Ocasio-Cortez, said that the Sunday menorah lighting was not the first time she has brought up the heritage — he’s heard her mention it to friends and supporters before. The spokesman said he did not know what kind of evidence her family has for the heritage.

Over the summer, Salazar received wide criticism after articles and op-eds questioned her claims of Sephardic heritage and other aspects of her Jewish identity (a spokesperson for Salazar declined to comment for this story). And while Warren’s camp assumed her DNA test would quell a backlash to her statements about Native American ancestry, it only provided fodder for further criticism that she is relying too heavily on controversial race science.

Wassner says that people who are overly concerned with proof are missing the upside. She said that many Latin Americans muse about Jewish ancestry as a way to have empathy for Jews. She pointed to the Argentine writer Jorge Luis Borges, who spoke about his possible Jewish heritage in the context of defending Jewish culture.

In an opinion essay for the Forward, Ashley Passmore, an assistant professor of German at Texas A&M University, wrote that accepting claims of Jewish ancestry like that of Ocasio-Cortez could lend American Judaism more allies.

Schoenberg acknowledges that there is a gatekeeping, elitist aspect to his and other genealogists’ concerns about proving Jewish ancestry. But, he says, the widespread claiming of Sephardic ancestry may have a sinister side-effect.

“We may be coming into a world where there are many times more Messianic Jews than what we would call Jews,” said Schoenberg. “And they might use this sense of, we are all Sephardic Jews, to change our ideas about who a Jew is.”

Ultimately, Schoenberg says, it’s good when people say they have Sephardic ancestry — perhaps it will make them less likely to be anti-Semitic. But he has a hard time getting past the trendiness.

“It’s just a fad that makes the rounds every so often,” he said. “And that bothers me a little bit.”

Update, 12/12/18 — This article has been updated with comments from a spokesman for Ocasio-Cortez.

Update, 12/1718 — This article has been updated to clarify a quote from E. Randol Schoenberg.