When A Retired Rabbi Is The Elephant In The Synagogue 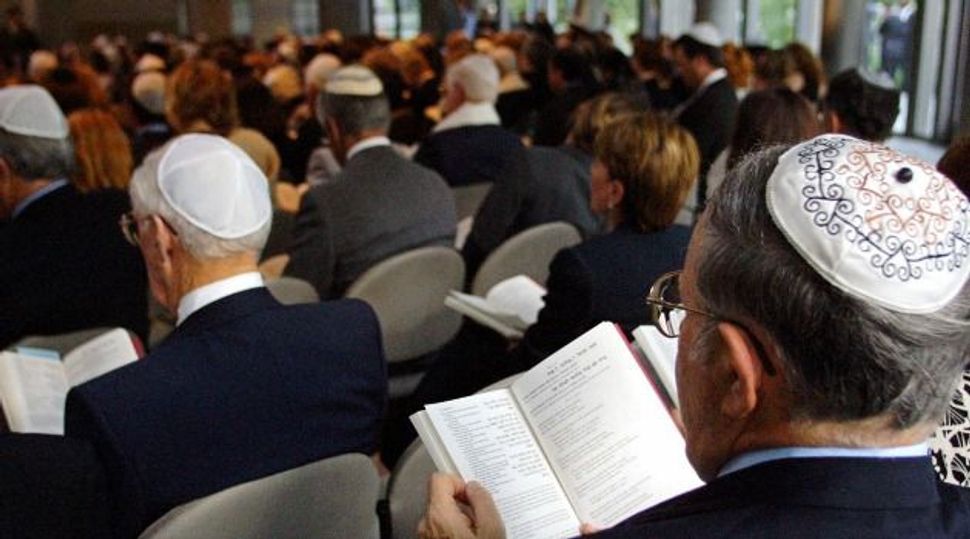 There’s the rabbi who wants to marry the kid he bat mitzvah-ed, or the rabbi who thinks he could give a better Yom Kippur sermon than the next guy. Some may simply feel that the buck should still stop with them, even when they’re no longer officially in charge.

That can put the rabbis hired to replace them in a tough spot.

The Reform movement’s rabbinical association has formed a committee to address such conflicts in the pulpit. The demographic behemoth known as baby boomers — those born in the two decades after World War II — are reaching retirement age, which means there will be more potential for rocky transitions. And usually, it’s the retiring rabbi who fumbles the transfer of power.

“There are, of course, many, many, many” instances of bad transitions, said Rabbi Dana Kaplan, formerly the rabbi of the Springhill Avenue Temple in Mobile, Alabama. “They are usually buried, because no one wants to talk about it.”

In fact, the rabbis and lay leaders who spoke to the Forward for this article largely refused to divulge instances of senior rabbi-emeritus enmity, citing privacy concerns.

But as long as rabbis have been retiring, there have been dramas of succession. The famed Hungarian-American rabbi Benjamin Szold (father of Henrietta Szold, the founder of Hadassah) made things very difficult for his successors after his congregation edged him out of the pulpit in the late 19th century, according to Jonathan Sarna, professor of American Jewish history at Brandeis University. Stephen Fried’s 2002 book “The New Rabbi,” about a Philadelphia-area congregation’s search to replace a beloved leader, noted the difficult relationship that leader had with his predecessor.

The title of “emeritus” — or “emerita” for women — is frequently conferred on rabbis and professors who have retired in good standing with their institutions. A long-time rabbi of a congregation will usually retain the honorary “emeritus” title until their death, and may receive an emeritus salary in addition to their pension.

The emeritus position is unique in the American job market. Although these rabbis are officially retired, they often want to retain the respect and spiritual authority — if not communal authority — they earned in the pulpit.

“Emeritus means, ‘I’ve been knighted,’” said Helen Dennis, a consultant and columnist on retirement who specializes in clergy retirement.

Hundreds of rabbis now gain that title every year. While the Reform movement does not have data on how many of its rabbis retire annually, about 10,000 baby boomers retire every day, according to estimates from the Social Security Administration.

Retirement can be quite painful for rabbis, says Dennis.

“They went into this because they felt something in their soul that drew them to the rabbinate,” she said. “And then the contract is over. And there are some really big adjustments.”

“The success of the transition is more dependent on the emeritus figuring out who he or she is without the pulpit,” said Rabbi Laura Geller, rabbi emerita of Temple Emanuel of Beverly Hills, and a member of the committee formed by the Reform movement’s Central Conference of American Rabbis to address senior rabbi-emeritus relationships.

Over a third of American Jews identify as Reform, according to the Pew Research Center, and its Central Conference represents over 2,000 rabbis, according to its website. It’s the biggest Jewish denomination, roughly twice as big as the Conservative movement.

The CCAR’s committee, convened earlier this year, has met five or six times, but has already heard case studies from rabbis around the country and spoke with experts (Dennis was one) on retirement. It is made up of ten rabbis — four emeriti and six active rabbis.

The CCAR said that the committee was formed proactively, and not in response to particular issues or conflicts between rabbis. Rabbi Steve Fox, CEO of the CCAR, said in a statement that there have been “fewer than a handful of formal ethics complaints against an [emeritus] rabbi by his or her successor or their congregation” in the last 12 years. In order to limit conflicts and ensure a smooth transfer of power, the CCAR – like the Conservative movement – recommends that synagogues find an interim rabbi while they search for a successor to the newly minted emeritus.

Yet the CCAR saw the issue as pressing, because of the demographics and also because of declining synagogue membership. As synagogues merge or shutter, young rabbis will be all the more likely to replace retiring rabbis than found their own pulpit, according to Rabbi Peter Knobel, the committee’s chair.

There are many potential areas for power struggles between the emeritus and his or her successor — life cycle events are one. The emeritus, for example, may want to give the eulogy for a beloved congregant, and that congregant’s family may feel the same way. That robs the new rabbi of opportunities to connect with congregants in the highs and lows of their lives.

“When you preside over a funeral, or when you prepare someone for a wedding, is when a congregant falls in love with their rabbi,” Geller said.

In other cases, the rabbi simply wants to hold sway like they used to. At one synagogue on the West Coast in the 1980s, a new senior rabbi once planned to stage a private intervention with a synagogue employee who had begun to show up to work inebriated, according to a person with direct knowledge of the events. When the emeritus found out, he sent a letter to the entire synagogue, blowing up the plans for the intervention.

But in some cases, conflict can be traced not to the emeritus, but to the congregation, according to Rabbi Frederick Reeves, leader of KAM Isaiah Israel, a historic Reform synagogue in Chicago’s Hyde Park neighborhood. KAM went through four rabbis (including one interim) in the 13 years after the retirement of their leader, Rabbi Arnold Jacob Wolf. Reeves said that Wolf had nothing to do with the rapid changeovers — it was that the congregation could not let go of his leadership.

“In the bulletin, when I first applied, his name was mentioned more often than the rabbi who was the actual rabbi,” Reeves said.

There are more stories of positive transitions than fraught ones, Nobel said. He added that he has an excellent relationship with his successor. Geller says that she and her successor, a longtime assistant rabbi at her temple, Jonathan Aaron, began planning the succession when she announced her plan to retire, and that it has gone very smoothly But, she noted, even a carefully planned retirement can go awry, and frustrate an emeritus, since synagogues are not required to hire the assistant rabbi for the senior position.

“You can never be sure that the person that you want is gonna be hired,” Geller said.

Knobel says the committee is not completely sure what will come of its meetings. It may recommend writing the emeritus’ responsibilities — teaching a weekly class, giving a short sermon on one of the High Holidays — into their retirement contract, something already done in some synagogues. They also hope to run workshops at CCAR conferences next year, and may make recommendations for changing the CCAR’s Code of Ethics to specifically address senior rabbi-emeritus conflicts.

“It’s always tough to succeed a very successful, long-lasting rabbi who was much beloved by the community, and the same would be true of a beloved leader of any kind,” said Sarna. “You’re actually better off succeeding the successor.”

When A Retired Rabbi Is The Elephant In The Synagogue