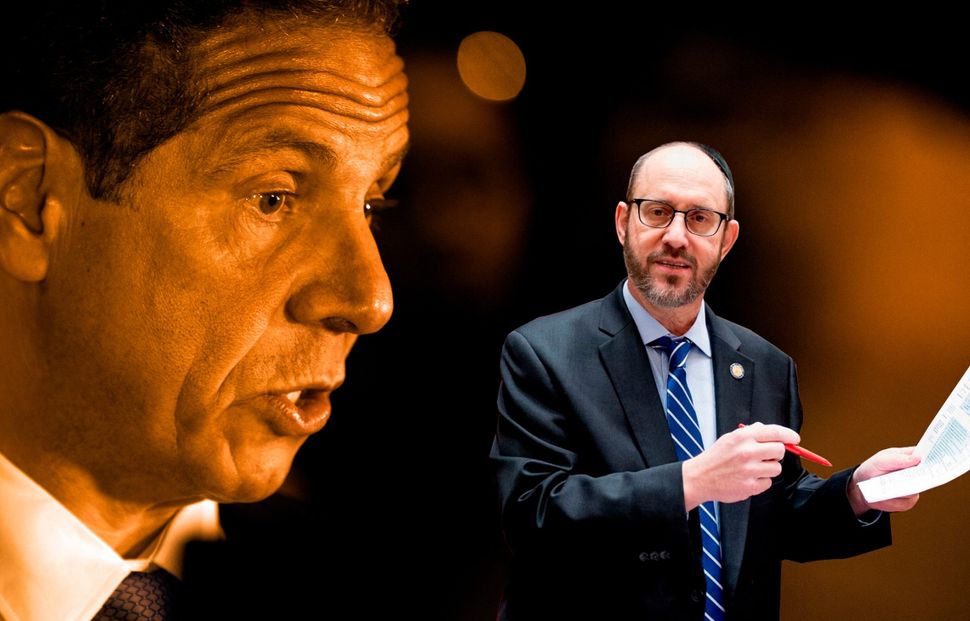 One Orthodox newspaper in Brooklyn, the Flatbush Jewish Journal, ran the screaming front-page headline “ATTACK ON OUR YESHIVAS!” in red, inch-high letters.

“The Jewish people will not bow down or surrender to the wicked, not even before the commissioner of education,” warned Aron Tietelbaum, the grand rabbi of the Satmar Hasidic group, in a speech weeks earlier. “We will launch a major war against the commissioner of education in any way [necessary],” Teitelbaum said, according to a translation published by an Orthodox news site.

The threats and warnings came as state authorities announced long-awaited guidelines that will regulate the curricula of Orthodox yeshivas. They also come as New York State’s ultra-Orthodox community faces a sharp loss of influence in Albany once the new legislature is sworn in.

Now, Orthodox leaders are using the state guidelines to rally their community, even as they recognize they must try to mend fences in the capital.

Last spring, State Sen. Simcha Felder, a close ally of ultra-Orthodox leaders, pulled off a remarkable coup, holding up the entire state budget in order to force through a law tailored to Orthodox yeshivas, which protected them from certain unwanted state regulations.

Felder’s extraordinary power rested on the fact that the state Senate was otherwise evenly split between Democrats and Republicans. By siding with the GOP, he gave control of that chamber to the Republicans, a critical difference in a state where Gov. Andrew Cuomo and the vast majority of the assembly are Democrats.

But in November, Senate Democrats swept away Republicans in the Senate, whose leaders had been close with Agudath Israel of America, an organization that represents a number of ultra-Orthodox communities. Even though Felder held onto his Boro Park-based seat, the #BlueWave effectively stripped him of his outsized influence. Albany insiders say that Agudath Israel has few relationships with the Democrats who are set to take over the Senate in January.

The new guidelines, which came after advocacy by the yeshiva reform group YAFFED made education in Hasidic yeshivas a major issue in state and local politics, will require education authorities to review the curricula of every private school in New York.

Many who reviewed the initial guidelines concluded that they would require seven hours of secular subjects per day in grades seven and eight, a schedule that would leave little time for religious studies. Later, the state education department clarified that the guidelines actually require half that much time, but in the meantime, Orthodox leaders saw a winning issue and seized it.

An article in Hamodia, a daily newspaper serving Orthodox readers largely in Brooklyn, reported that leading rabbis had asked for special prayers against the decree.

The Flatbush Jewish Journal wrote in an unsigned column on Dec. 6 that “people with little understanding of our lifestyle and religion will be dictating how we teach our children.”

By early December, even Orthodox leaders outside of the Hasidic community were warning that the seven-hour requirement could threaten their schools.

“The news is that the goyim see us all in the same light,” said Rabbi Yisroel Reisman, who leads a historic non-Hasidic Brooklyn yeshiva, in a video circulated by Agudath Israel. “We’re all ultra-Orthodox fanatics, we all deprive our children of a proper education. Never mind the fact that most of our yeshivas score far higher in the state tests than the…public schools… No one’s going to listen unless we organize as a community.”

One Albany insider closer to the Jewish community said that the seven-hour issue was an easy one for Orthodox leaders.

“You’re guaranteed to have a win,” the insider said, arguing that it was clear that the state education department would clarify their guidelines, as they eventually did, on Dec. 21. “It’s a guaranteed victory, so why not rile everybody up.”

Agudath Israel and its allies made this effort to unite Orthodox Jews against state authorities as the organization enters a period of significant political uncertainty. The organization had made close alliances with Republicans in the State Senate, who lost their long-standing majority. Felder had used his status as a sort of swing vote to wield significant political power in Albany. The November elections ended that gambit.

“Basically [Agudath Israel] misplayed the whole situation,” said another Albany insider. “They need an excuse for why they [messed] up the politics.”

Agudath Israel’s executive director, Rabbi Dovid Zweibel, was not available for comment. Rabbi Yeruchim Silber, Agudath Israel’s director of New York government relations, declined to comment. Goldbenberg, the Agudath Israel board member, said that he and his colleagues do work with Democrats.

“They’re going to try to build power and try to build relationships,” said the Albany insider close to the Jewish community. “They never really had an eye towards the future, and they just read the situation poorly.”

Other Orthodox groups have been more measured in their response to the guidelines. The Orthodox Union Advocacy Center, which largely represents Modern Orthodox communities, sent a letter statement to schools in its network on December 19, in part saying that the state education department had clarified its guidance, and that the schools would not be required to provide seven hours of daily instruction.

“We have been, and remain, extremely concerned by State regulation of Yeshiva and day school curriculum,” the OU said in its letter.

Naftuli Moster, who leads YAFFED, told the Forward that the roughly three-and-a-half hours of study now required per day were doable.

“Most Modern Orthodox yeshivas provide that,” Moster said. “Most Hasidic girls schools even provide that… It really brings us down to a small segment that doesn’t meet the standard, and this is something they need to remedy.”

Yet Goldenberg, the Agudath board member, said that the Orthodox community’s concerns were far from allayed. He raised additional issues, including questions about whether Jewish studies courses could count towards some secular requirements.

“When you’re learning Talmud, it sharpens the mind,” he said.