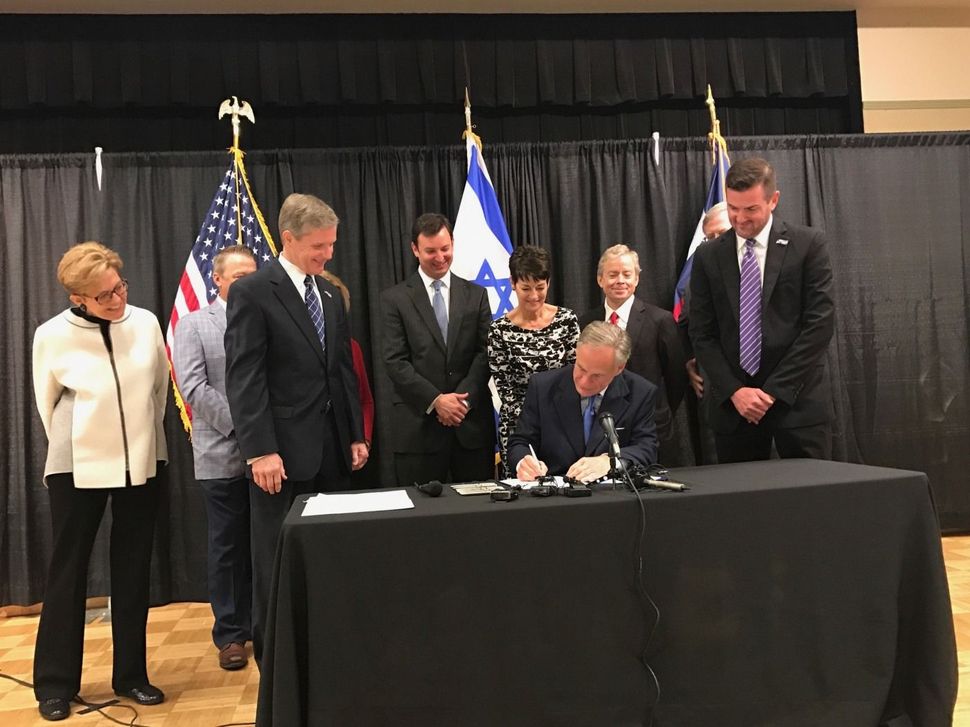 Two of the most influential people in the country when it comes to American policies toward Israel are a Mormon state representative in South Carolina who used to be an Eagle Scout and a Jewish law professor in Virginia who used to study pirates. You likely haven’t heard of Alan Clemmons or Eugene Kontorovich, but around three-quarters of Americans live in states with laws written or inspired by them — laws that aim to protect Israel from the boycott, divestment and sanctions (BDS) campaign.

Versions of their bill, which bans state entities from investing or contracting in companies that participate in BDS, have been passed by 25 other states since Clemmons shepherded it into law in his state in 2015.

Pro-Israel groups – most notably the Israel Allies Foundation, which brought Kontorovich and Clemmons together – have spread them nationwide, ensuring their passage with strong bipartisan majorities despite the complaints of civil liberties advocates and pro-Palestinian groups. Advocates have tried to keep the laws consistent across states, but have managed to adapt when necessary. Now they’re using the same viral techniques to create statewide legislation to officially define anti-Semitism in a way that includes anti-Zionism.

The anti-BDS bills have spread so far and so fast that the sponsor of the one in Missouri – who said he knows Clemmons well – told the Forward he had no idea that the South Carolinian sponsored the original law.

“The way I see it, BDS efforts are an attempt to harm America’s staunchest ally, and at worst, attempt to destroy the state of Israel,” said Bob Onder, the Republican state senator in Missouri who sponsored the bill.

Clemmons and the IAF did not respond to requests for comment. Kontorovich said he did not have time to respond before the Forward’s deadline.

It’s not just about statehouses anymore. The U.S. Senate has involved itself in protecting these bills. Senators voted this week to advance a bill that would give legal cover to states that pass the anti-BDS laws.

The law’s origin story, as The Jerusalem Post explored, goes something like this: While on a junket to Israel in 2014, Clemmons met with a factory owner who exports automotive filters to South Carolina but said the BDS movement was already hindering sales in Europe. On that same trip, Clemmons met Kontorovich, who had previously focused on international law, and shared his concerns.

The pair worked together with the IAF, a small not-for-profit whose primary mission used to be arranging meetings between Christian legislators and parliamentarians in the U.S. and Europe with their Israeli counterparts. Kontorovich crafted the law’s structure, Clemmons introduced it as a bill, and the Israel Allies Foundation secured the support of other Jewish and pro-Israel organizations to further lobby and advise its nationwide network of legislators about how to best pursue a version of their own.

The Israel Project (full disclosure: I used to work for their publication The Tower), StandWithUs and local Jewish federations in the various states also work on this issue.

Mainly, the spread of the law has acted as a “huge deterrent,” said StandWithUs Midwest executive director Peggy Shapiro. It forces firms to choose between satisfying anti-Israel activists and potentially lucrative opportunities with state governments.

Indeed, while most of the states have created registries of pro-BDS companies, very few companies have actually admitted to boycotting Israel. The Texas registry has three entries.

According to Bob Onder of Missouri, many local and national Jewish organizations, as well as Christians United for Israel, are advising and lobbying on the legislation in his state. His bill only failed to pass last year after a libertarian Republican filibustered it by listing such a law’s effects on every single country in the world, alphabetically. The bill’s sponsors gave up after he reached the Bahamas. But it’s likely to pass this year.

One reason for that is that the bill was updated to only apply to businesses with 10 or more employees. This qualification, which is also being seen in other states, is likely a response to stories like the case of the Texas speech pathologist who sued the state because she would have had to swear not to boycott Israel in order to work at a public school.

“We’re trying to get away from mom-and-pop individuals and address companies that might get contracts with the state that are of significant value,” Shapiro said.

These laws have already been the subjects of lawsuits by people who refused to sign anti-BDS pledges; the laws were preliminarily blocked by courts in Kansas and Arizona on First Amendment grounds but affirmed in Arkansas.

A new legislative front has also emerged: Codifying an official definition of anti-Semitism, especially for use in public school and university systems. The definition, which was adopted by the Obama State Department and a number of European countries, lists examples of anti-Semitism, controversially including anti-Zionism or applying “double standards” to Israel. The ACLU has claimed that these efforts are designed to “silence criticism of Israel that is protected by the First Amendment.”

Clemmons and the Israel Allies Foundation pioneered that front as well, passing an official definition law in South Carolina in 2018. “This is a massive public policy victory that comes at a critical time,” IAF U.S. director Joseph Sabag said then, citing rising anti-Semitism on college campuses.

A similar bill was introduced this month in Florida.

“We’re using the definition from South Carolina that got put out last year,” that bill’s sponsor, state Rep. Mike Caruso, told the Forward.