When Rabbi Ted Falcon dies, plant a fig tree over his remains.

Sorry, with his remains: Falcon wants his body to be composted.

“I’m just trying to apply the principle of returning dust to dust,” he said. “How do you do that in the most productive way?”

In May, Washington became the first state to allow body composting as an alternative to burial, cremation and whole-body donation for scientific or medical use. Falcon, 77, a Seattle resident, sees his family spreading mulch over his burial site, instead of leaving a rock on a gravestone in the traditional Jewish way.

Many rabbis feel that composting corpses runs counter to Jewish law, or halacha. But with the effects from the global climate crisis ratcheting up every year, some may choose this greener option. And while the practice has yet to really get going among Jews or the general population, increasing interest may soon cause more Jews to ask if they want for their bodies the same fate as so many onion skins, egg shells and pieces of moldy bread.

If you’ve ever been to a Jewish funeral, chances are you’ve seen what has become the traditional burial method for most Jews: an unadorned pine box, made without any metal screws, so as to facilitate the body’s return to the earth. Very traditional groups, such as Hasidic Jews, may forego the box entirely, and bury the body in a white shroud, or in a large prayer shawl. 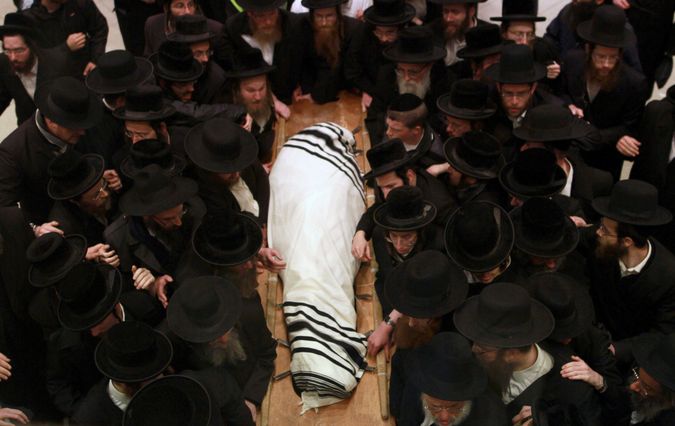 Ultra-orthodox Jewish men mourn over the body of Rabbi Yochanan Sofer, leader of the Erlau Hasidic sect, during his funeral in Jerusalem on February 22, 2016. Image by Getty

But Jewish burial methods have changed over the centuries. Ancient Israelites buried their dead in caves, or under a pile of rocks in the desert wilderness. In Jerusalem, such as on the famous Mount of Olives cemetery, bodies have long been buried in above-ground caskets made of stone slabs.

Now, the pine box method is kept in force more by cemetery landscaping concerns than strict Jewish tradition: The uniform boxes — frequently placed inside graves lined with concrete — help cemetery lawns stay flat. Indeed, until now, Falcon, a Reform rabbi for over five decades who focuses on interfaith work in the Seattle area, had planned to be buried in the classic pine box. Then he met Katrina Spade.

Spade is the founder of Recompose, a company that plans to offer body composting services. She helped her neighbor, a Washington state senator, write and introduce the bill that allows the composting of human remains. Falcon said she reached out to him several years ago, when her project was still in its infancy. (Spade was not available for an interview for this article.)

Spade’s method is part science, part futuristic funeral home. The bodies are held in large hexagonal tanks, in a hall that is part light-filled art studios, part boutique plant nursery. Inside the tanks, the bodies are mixed in with wood chips, straw and other organic materials. This creates a warm environment for bacteria to thrive, which then break down the body quickly. As the body decomposes, it falls into lower hexagonal chambers, where, after about 30 days, it emerges as about two wheelbarrows-full of the kind of soil you might pay hundreds of dollars for at Home Depot. 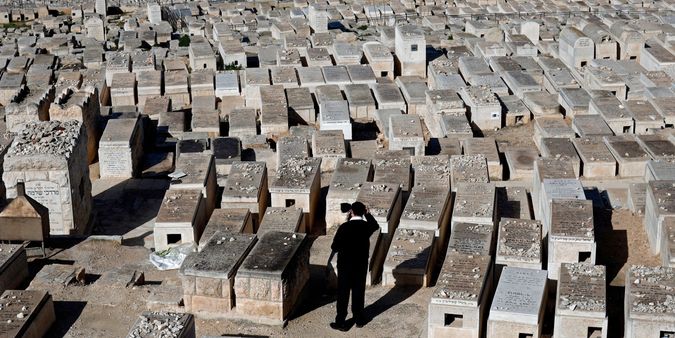 At the Mount of Olives cemetery in Jerusalem. Image by Getty

“When I heard this possibility, I thought, ‘This is just great,’” he said. “One can go back into the cycle and provide nourishment for things that grow.”

Other Jews might not agree. Because Falcon is Reform, he does not consider traditional Jewish laws — including the ones that pertain to burial — to be binding, as more observant Jews do. Yet even Reform rabbis balk at deviating from traditional burial customs. For example, even though cremation has grown in popularity among Jews as it has in the general population, not all Reform rabbis will agree to officiate at a cremation ceremony, according to the movement’s website.

In 2017, the Conservative movement’s Committee on Jewish Laws and Standards, which determines how, and to what extent, traditional Jewish law can be reconciled with modern life, received a question about body composting. Rabbi Jeremy Kalmanofsky, the senior rabbi of the historic Anshe Chesed congregation in Manhattan’s Upper West Side neighborhood, took the question upon himself.

His answer? No composting.

“Spade may find it charming to imagine her deceased neighbors ‘pushing up the daisies’ in her garden,” he wrote in his submission to the Committee. “But this is incompatible with Jewish norms of reverent treatment of the dead.”

Two other senior rabbis on the Committee agreed with his opinions.

Kalmanofsky’s compost prohibition derives from a particular Talmudic phrase: assur b’hana’ah, which means one cannot take pleasure from forbidden objects. In the mortuary world, that means, for example, not making a diamond out of a loved one’s cremated body. And, Kalmanofsky argues, it also means not using body compost to raise any kinds of plants.

And for Jews wanting to make their eternal resting place a particularly Earth-friendly one, Jewish tradition already offers that.

“What we do, classical Jewish mortuary practices, are composting, are green,” he said. “It is a method of, you are from the earth, you return to the earth.” 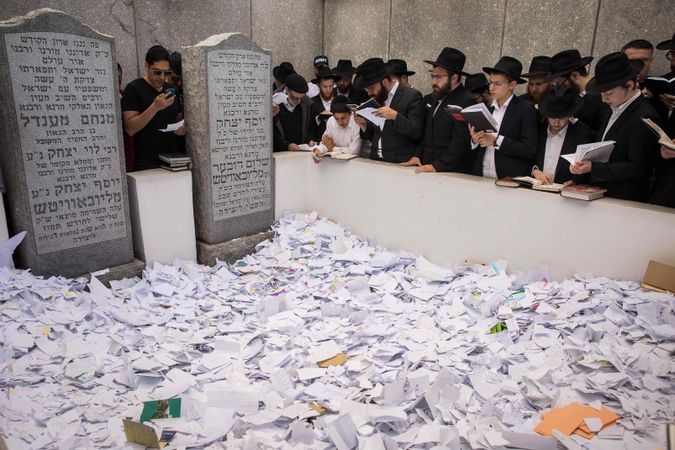 The graves of the last two Lubavitcher rebbes in Queens, New York. Image by Getty

It’s not quite that simple. Proponents of traditional Jewish burial in the ground like to say that, when done without concrete grave liners and expensive caskets, it’s just another form of composting. But bodies buried six feet under decompose anaerobically, without oxygen, releasing the powerful greenhouse gas methane into the atmosphere. There’s also the cost of cutting down the pine trees used for most Jewish caskets.

(Cremation is much worse. It requires burning about 28 gallons of fuel — that’s a road trip from New York to Chicago in your average sedan — and releases 540 pounds of carbon dioxide in a year.)

Decomposing a body aerobically has perhaps the smallest carbon footprint. The process goes quickly — a matter of weeks — has limited gas emissions, and avoids emissions from the elements that traditionally go into burial: the casket, the headstone, the grave liner, and so on.

Kalmanofsky’s investigation was inspired by a question that came before the Committee on Jewish Laws and Standards about “promession,” a copyrighted method of quickly decomposing a body from a company in Sweden called Promessa. Like Recompose, Promessa has yet to use its method on an actual human body.

Susanne Wiigh-Mäsak, the founder of Promessa, said that her company has seen interest from people across the religious spectrum.

“In the back of our mind, I think that we are looking for something where we follow the creation, follow what nature intended,” she said.

Still, Kalmanofsky says that there is plenty of room within Jewish law for having a very environmentally friendly cemetery. There’s nothing in halacha that says you can’t bury people in a forested area, in multiple-depth graves dug by hand, with little more than a shroud around them and a small stone marking their resting place.

“I think, if it’s a wooded area, it’s beautiful and in many ways preferable,” he said.

But Falcon is looking forward to having his remains do more than lay in the graveyard, listening to the wind in the trees. He wants to go back into the circle of life, wherever that circle leads.

Perhaps to a fig tree.

“The idea of providing fruit is very appealing to me,” he said. “That’s almost — it could almost bring tears to my eyes. What a beautiful thing.”